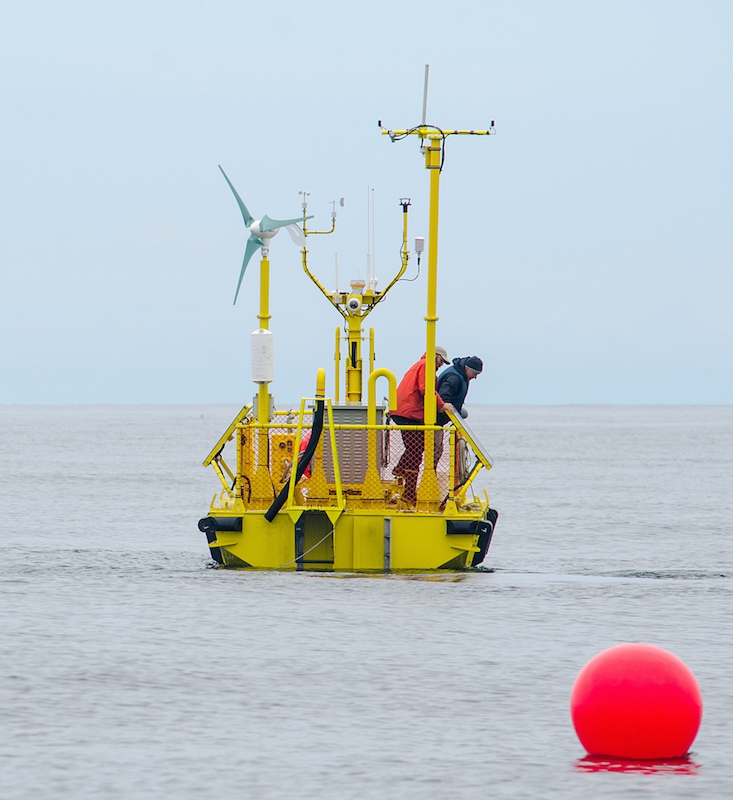 January 8, 2015 – A new analysis suggests that large-scale wave energy systems developed in the Pacific Northwest should be comparatively steady, dependable and able to be integrated into the overall energy grid at lower costs than some other forms of alternative energy, including wind power.

“Whenever any new form of energy is added, a challenge is to integrate it into the system along with the other sources,” said Ted Brekken, an associate professor and renewable energy expert in the College of Engineering at Oregon State University.

PHOTO: The Ocean Sentinel has been deployed off the Oregon Coast, one of the U.S.’s first wave energy testing devices. Photo by Pat Kight, Oregon Sea Grant.

The study that led to these conclusions was a collaboration of researchers at Oregon State University, the University of Victoria and private industry. The findings further suggest that, by balancing wave energy production over a larger geographic area, the variability can be even further reduced.

Another strength of wave energy, the study suggested, is that its short-term generation capacity can be predicted with a high degree of accuracy over a time scale ranging from minutes to hours, and with some accuracy even seasonally or annually.

Wave energy is not now being commercially produced in the Pacific Northwest, but experts say its future potential is significant, and costs should come down as technologies improve and more systems are developed. The study in question examined the hypothetical addition of 500MW of generating capacity in the region by 2025.