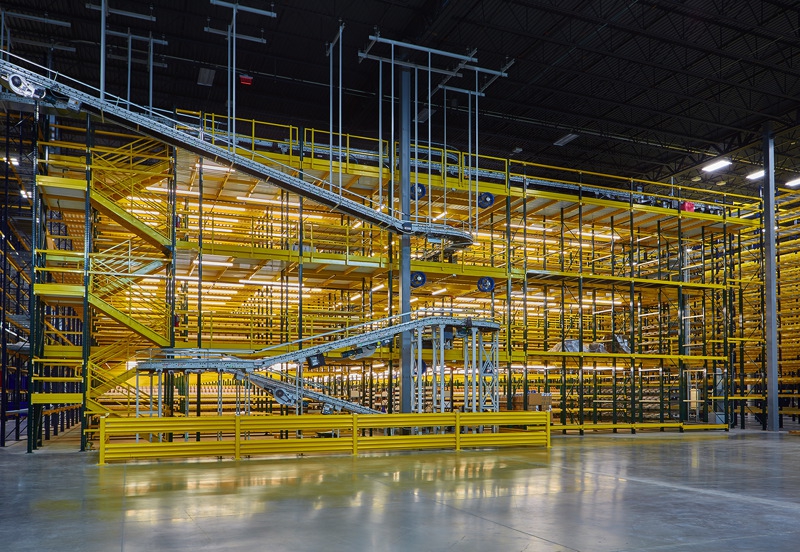 June 21, 2017 – A vital part of Werner Electric Supply’s goal to double sales to $500 million by 2020 is its 200,000-sf, state-of-the-art distribution centre in Appleton, Wisconsin. Not long ago, the distributor of electrical, lighting, datacom, pneumatic, safety and automation solutions had a 100,000-sf facility and was leasing additional warehouse space.

“We built the new facility to add inventory and services to meet our sales goal, as well as get our inventory back under one roof,” says Lloyd Fabry, Werner’s regional distribution centre manager.

According to Fabry, the new facility holds 28,000 items in inventory, including everything from nuts and bolts to 20-ft conduit lengths and 7000-lb reels of wire on the electrical supply part of the business. It also carries items such as drives, PLCs, actuators, push buttons, and safety equipment for the machine control automation part of the business.

Getting organized
The new facility sports a custom pick module, warehouse design and management system that promises a competitive advantage.

“With the new facility, we’re capable of taking orders later in the day, filling the orders, and having them delivered to our customers across Wisconsin and upper Michigan by our fleet before 6 am the next day,” says Fabry. “We’re achieving a zero order backlog at end of each day.”

“Our zone route, pick and pass, pick module—along with a new warehouse management system and weigh scale to capture picking errors—essentially eliminates our secondary packing process,” says Fabry. “It is designed to handle from 70-80% of our volume. It allows us to place more locations at ground level so we can pick more items on foot. That means we need less equipment and training, as well as avoid disruption if equipment breaks down.”

According to Kyle Arndt, a Werner project manager, three options were originally considered for the pick module, but only one was feasible. Constructing a permanent mezzanine-supported structure was too costly because it required adding building columns, footings and fire protection. A shelf-supported structure was also ruled out because no vendor could go as high or support the weight they needed.

The pick module has rack all the way around on four sides, with a walkable catwalk along the inside perimeter.

To construct the pick module, SK2000 pallet rack, a boltless, closed tubular upright product was chosen. All beams are constructed of 55,000 psi (min.) steel, and holes are placed on the column’s face, not the corners, minimizing strength loss. Compared to open back roll formed columns, the closed tubular uprights are 44x more torsion/twist resistant, with 250% greater frontal impact resistance and 68% greater side impact resistance.

Easy, boltless assembly of the system enables more flexibility for any future adjustments. “Depending on future needs, with boltless assembly we could add to the pick module, move it, or build another one as needed,” says Arndt.

For similar reasons, the boltless rack was used, but with larger 4 x 3-in. posts to construct custom reel rack with additional storage above. This rack is designed to hold up to two 7000-lb reels in a hanging position so wire can be pulled off and cut to the customer’s needs.

“The reel rack design challenge was unique, not only because of the weight of the reels, but also because their load is dynamic, not static, when the wire comes off the reel,” says Arndt. “Oversize base plates were installed that helped with stability and function, while keeping our floor design cost effective.”

Since the new warehouse is 45-ft high with an FSR sprinkler system, the storage racking manufacturer also custom-designed and built 35-ft high cantilever rack with 25 arm levels for storing conduit. With no front column in the way, the cantilever rack is faster to load and unload, lowering handling time and costs. The lack of a front column also saves horizontal space normally lost to rack structure, and handling clearance is also more abundant.

Safety also key
To protect people, racks and the building structure, a number of guardrail systems were also installed for safety.

“At every stage of the process, it is important to have a partner that is willing to work with you,” concludes Fabry. “To meet our rack requirements, that sometimes meant double posting up to the first beam, hitting the beam adjustment increments, and being flexible with different beam sizes to help control our costs.”

With files from Chassity Clark for Steel King Industries.

* This article was originally published July 15, 2016. It also appears in the Spring 2017 edition of Distribution & Supply.