Features Blog
What do drug dealers and nuclear power operators have in common? 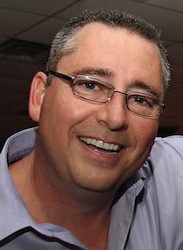 The featured speaker at today’s event was Bruce Power’s Duncan Hawthorne, who enjoys talking about nuclear power, and wants to ensure it’s properly positioned as a critical element in Ontario’s energy supply mix.

Hawthorne explained that, as a young engineer back in Scotland in the early 1980, they would talk about what was going on in Ontario, specifically Ontario Hydro, when they talked about nuclear power best practices.

And the CANDU reactor was a game-changing technology, said Hawthorne, because you could refuel at full power. “A well-run CANDU can go toe-to-toe with any other nuclear technology,” he boasted.

Then he jokingly compared nuclear power operators to drug dealers, noting that “you only hear about them when something goes wrong”.

But his primary message was that Canada’s nuclear power industry doesn’t get nearly the attention it deserves, conceding that nuclear power operators themselves probably haven’t done as good a job as they could have in getting the message out… for starters, that nuclear supplies 62% of Ontario’s power.

And if we start seeing more electrified transportation, we’re going to need a hell of a lot more power, and nukes are great at making lots of power. Hence the importance of successful refurbishments at Darlington and Bruce.

“Are we going to go backward and start building coal plants again… like Germany [is doing now],” asked Hawthorne. “So we have to get this [nuclear plant refurbishment] right.”

And the nuclear industry is not shrinking, but growing worldwide. In fact, there will be twice as many reactors operating globally by 2040.

Hawthorne explained Canada is seen as a nuclear power pioneer on the global stage, and wished Ottawa would embrace that legacy and shout it to the world. And he should have a pretty good idea of what his global counterparts think, as he is the current president of WANO, the World Association of Nuclear Operators.

As IESO’s Bruce Campbell said at last month’s OEN luncheon, “We have nuclear and wind as dancing partners in this province”.

Let’s work together to ensure we have a reliable supply mix for all conditions, all the time.

Be sure to visit www.ontarioenergynetwork.org for upcoming opportunities to network with Ontario’s power players.