Features Articles Safety Safety News
What do you get when you cross an electrocuted lineman with a manager of health & safety and a plastic surgeon? 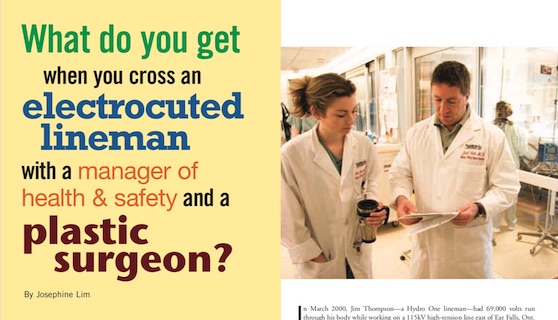 August 22, 2008 – In March 2000, Jim Thompson—a Hydro One lineman—had 69,000 volts run through his body while working on a 115kV high-tension line east of Ear Falls, Ont. Witnesses told him his head snapped back and touched his ankles when it happened.

Thompson was swung upside down, dangling by his belt; all the while, he couldn’t see anything, but felt a sensation of bubbling in his hands and legs. He’d later find out that the current entered through his right hand and exited through 16 holes in his left hand, blowing out both his legs below the knees in the process.

Thompson was taken by helicopter to emergency in Dryden, Ont., where the doctor looked him over, bandaged him up and released him after 24 hours saying, “You’re fine”. The next day, Thompson found himself back at the hospital with chest pains, and severe spinal and joint pain. To his dismay, the doctors simply prescribed stronger painkillers and sent him on his way.

But he knew something was really wrong with him. Thompson constantly felt agonizing pain throughout his whole body and couldn’t sleep, but no one could explain it. And worse, his doctors were under the impression the shock he got was harmless, so the Workplace Safety and Insurance Board (WSIB) cut Thompson’s benefits and ordered him back to work.

The pain never stopped throughout his ordeal and, for months, Thompson could be found bedridden, hopped up on painkillers. He also suffered memory loss and periods of great confusion; on a really bad day he wouldn’t be able to find his way home.

Finding a cure for ignorance

At the time of Thompson’s ordeal, Brian Tink was the manager of health, safety and environment at Hydro One, and he was no stranger to the case: when the incident occurred, Tink had been part of the investigation team that helped deal with the Ministry of Labour. However, Tink didn’t know about Thompson’s WSIB issues.

In April 2001, Tink attended a union meeting at the Best Western Motor Inn in Dryden—where Thompson lives—to vote on a contract. He arranged to meet with Thompson and chat about his situation, and get a sense of all the symptoms he was still experiencing a year after the incident. Thompson did not disappoint.

“I had started a daily log… to try to help my doctors,” says Thompson of that meeting with Tink, “so I just handed the log to him and said, ‘Tell me what’s wrong’.”

Tink left that meeting feeling motivated to find a way to help Thompson, and his first step was to find experts who knew something about electrical injuries. But it was not an easy road. “It drove me crazy!” Tink admits. “I started reading this and that, and came to realize there wasn’t a lot of information out there on electrical injury.” One thing he did discover, rather quickly, was that “a lot of people didn’t understand how serious this could be”.

The HS&E manager then heard about something called Telestroke. Launched in 2002, it was a multi-site, emergency-based telemedicine service for supporting emergency physicians in two northern Ontario cities. Under Telestroke, videoconferencing units were provided both in the hospitals and homes of participating University of Toronto neurologists, while PC workstations were used to access computed tomography (CT) images. Tink figured a system like this would be great for electrical injury.

Unfortunately, he didn’t really know anyone in the medical community who could help him get the idea off the ground. Then he met Dr. Joel Fish, a plastic surgeon and the medical director of the Ross Tilley Burn Centre of the Sunnybrook Health Sciences Centre. What started as a 15-minute appointment expanded into a three-hour discussion and a written agreement between the two: when Tink had any questions about an injured worker, he would call Fish who would, in turn, contact the hospital where the injured worker was located to learn about the injury and offer assistance.

The concept soon came to include other institutions. NORTH Network (now combined with two other provincially funded telemedicine programs to form the Ontario Telemedicine Network) was added to the program. For special care, patients could be transferred to St. John’s Rehabilitation Hospital.

Inevitably, the program became available to the whole province (September 20, 2003), and it was getting requests to see patients from all over the place. “There were patients who’d been electrocuted and had problems for weeks, months… sometimes even years had passed,” says Fish. “They were still having problems and had nowhere else to turn.” He discovered that many of them found out about the electrical telemedicine program on the Internet, or their employer referred them.

Still, not enough people—including doctors—know about the program or the potential severity of electrical injury, which is why Tink wishes everyone would call into the Criticall system, regardless of how small an injury may appear. “We have cases where someone is discharged the next day but, in a little while, the problems come out,” says Tink. “Were the Criticall system called right off the bat, the attending doctor would have been put in touch with somebody who could help. We’ve got to spread the word that electrical injuries are different.”

Upping the ante and aiming for leadership

Unfortunately, the resources to support Sunnybrook’s unofficial electrical burn program are stretched thin; they’re essentially “borrowed” from the burn and trauma work being conducted by Sunnybrook’s burn surgeons. In partnership with Hydro One, Sunnybrook is looking to fill this void with the creation and endowment of the Hydro One Chair in Electrical Injury. It would be the only one of its kind in Canada (and Tink believes it’s just a matter of time before the program becomes international).

“We needed an Electrical Injury Program,” says Fish. “If you’ve ever spoken to someone with an electrical injury, they’ll tell you they’ve been from one doctor to another, and undergone test after test. They had nowhere else to go. Now they do, and it’s something you cannot let enough people know about.”

The Hydro One Chair will act as the program leader for electrical burn care and research, leading not only Sunnybrook, but the country in treating electrical burns and conducting research into the best and new practices for treatment. The financial objective is $3 million to get the Chair going—and keep it going.

The bottom line is that, without Sunnybrook’s Electrical Injury Program (or the fledgling Chair), there really is no centre of expertise in this country for people who have sustained an electrical injury. Healthcare providers work in isolation, usually focusing on the immediate physical symptoms of the injury—completely unaware of the potential physical and non-physical long-term effects that can affect initial care efforts.

Thompson is by no means Canada’s first electrical injury victim and, despite more rigorous attention to health and safety matters, he won’t be the last. So for the sake of all the Jim Thompsons of Canada—past, present and future—let’s answer the call as an united industry. Let’s help make Sunnybrook’s Hydro One Chair in Electrical Injury, not only a reality, but the world leader in electrical injury research and treatment.

Potentially causing damaging long-term effects, electrical injuries are categorized into three types: arc flash burn, and low-/high-voltage injuries. The flash burn is the most common injury, and can cause severe burns that destroy skin and tissue (which may result in amputation).

Both low- and high-voltage injuries involve actual electrocution and conduction of electricity through tissue, muscle, bone and nerve. Occasionally you can spot physical evidence of its passage through the body, but there usually isn’t much. (In the general medical community, low-voltage is considered anything under 1000 volts.)

The severity of electrical injury is based on voltage, current, current type and pathway, resistance and duration of contact. (AC is considered more dangerous than DC because it causes repetitive muscle stimulation that can increase the time of electrical contact.)

Researchers have begun looking more seriously into electrical injury, and have discovered that a number of victims suffer from symptoms previously unrecognized or undiagnosed. For example, the less severe cases often hide damage, leading to a high proportion of cases resulting in permanent disability. In addition to burns, amputations, and trauma-related injuries, affected functions can include cognition, mood, behaviour, cardiac performance, orthopaedic status and sleep.

ALSO WATCH our special presentation ““The Road to Recovery” from invisible electrical injury”, where we speak with Dr. Joel Fish and some of the staff at St. John’s Rehab hospital about Invisible Electrical Injury.