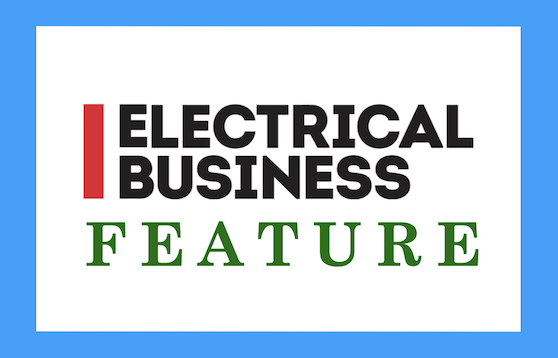 May 9, 2020 – Who should install cabling for Power over Ethernet (PoE) applications was a highly-contested issue in many parts of the United States in 2019, but it seems to be a straightforward—if slowly evolving—situation in Canada.

This installation question originated some years ago with the advent of LED light fixtures and other low-voltage devices that can be installed with low-voltage cables, and therefore do not require traditional electrical wiring.

The Canadian Electrical Contractors Association (CECA) is of the view that PoE cable must be installed only by those who are qualified to do that work—those in Ontario who have a Network Cabling Specialist (NCS) trade designation (a ticket which some electricians in Ontario also hold) or those in other provinces who have similar training.

According to CECA, originally, training to install low-voltage cable was only available from product manufacturers. Electricians were the natural choice to receive this training in those early days, but over time, other training avenues became available.

“Training from BICSI [the global association supporting the advancement of information and communications technology professionals] became available, and that was good because it eliminated the need to have manufacturer-specific training,” explains CECA President David Mason. “However, it was, and still is, very expensive. A few years ago, Ontario introduced the NCS trade ticket through training by IBEW, which is comparable to that offered by BICSI.”

Jerry Roitelman, CECA director for Manitoba, explains that in that province, a qualification similar to NCS called the “M ticket” is in the works. Other provinces are also working on this area, and Mason says that eventually the NCS ticket will have Red Seal Canada-wide recognition.

Mason explains that as electrical technology of any type continues to evolve, the vast majority of Canadian electrical contractors send their electricians and other workers for training updates appropriate to the work their particular businesses take on.

Relating specifically to training for data cable installation, contractors in Ontario who take on this work ensure their electricians who have the NCS ticket, or their NCS tradespeople on staff, are updated as required. Similarly, in other provinces, electrical contractors who take on data cable installation work make sure their employees get training updates from available sources.

However, whether it’s data cable installation or other types of work, Mason does acknowledge that there are a few companies out there across Canada who have employees currently doing tasks they aren’t qualified for and/or who aren’t properly updated. These firms, he says, must be brought up to the standards of the vast majority of electrical contractors in the industry who do have all their electricians and other workers up-to-date.

“Almost all electricians take training every two or three years to keep up with changes in the Canadian Electrical Code,” Mason notes, “so this would be similar to that.”

The Electrical Safety Authority of Ontario has discussed this issue in the past, he says, and has gone as far as attempting to make additional training compulsory in order for electrical contractors to keep their licences.

In Alberta, in addition to requiring CE Code update training for Master electricians and Safety Codes Officers, there is also the Professional Electrical Contractor (PEC) designation, which requires contractors to ensure their employees receive appropriate professional development every year.

Creating a similar designation in every province has been discussed at CECA board meetings, but Mason says that in the end, because that strategy doesn’t preclude a patchwork of training requirements across the country, CECA favours the national route. To pursue this, he says, “we need a working group and it would likely involve NETCO [the National Electrical Trade Council, founded by IBEW and CECA], which has already done much work to harmonize Red Seal electrician requirements across the provinces.”

South of the border

The National Systems Contractors Association (NSCA, whose 950 members in the U.S. and 50 in Canada install many types of structured cabling systems) holds a similar view about cabling installation for PoE applications. That is, those who install low-voltage cable need not be electricians but must be qualified.

However, NSCA and its partners have had to fight diligently over 2019 to keep this position recognized across much of the United States.

First, a little background. There are currently 11 U.S. states where cabling specialists are exempt from state laws requiring Class 2 and 3 low-voltage cable work to only be done by electricians. Last year, in every one of those states, electrician associations challenged this exemption.

Working with representatives from BICSI and about 10 other trade associations, NSCA fought these challenges.

“Our subject-matter experts conveyed to each set of lawmakers during various hearings that there is no safety risk with cabling specialists installing low-voltage cable,” explains NSCA’s executive director, Chuck Wilson. “We were successful in all 11 states. Every single lawmaker understood that at the end of the day, the electrical code is there to keep us safe, not to dictate who should install what.”

NSCA wants the exemption in force across all 50 states, but no one can be sure if or when that will happen.

Wilson also reports on another interesting related development south of the border in 2019. In 11 other states where no exemption exists, electrician associations tried to have the level of power legally allowed to flow through low-voltage cable reduced. They were not successful.

Whether there will be any sorts of regulatory challenges related to PoE this year in the U.S. is unknown, but according to NSCA at the beginning of March 2020, there was nothing in play.

BICSI considers its training and certification to be sufficient for the design and installation of all types of cable infrastructure, including those that relate to PoE applications.

As mentioned above, however, Mason describes the training done by IBEW for the NCS trade as “comparable” to that offered by BICSI, and also describes BICSI training as “very expensive.”

For his part, BICSI’s regional director for Canada, Fernando Neto, reports that there have been some “preliminary discussions” between BICSI and IBEW Toronto to explore ways that IBEW’s NCS training in Ontario could be supplemented with some BICSI training.

Neto says that this would not only add to the knowledge base and expertise of NCS tradespeople, but also give them the credibility of having training from an organization that has been around for decades and is the only one that’s recognized globally. This would also, in his view, benefit the entire cable infrastructure industry.

This article—along with other great content—appears in the April 2020 edition of Electrical Business Magazine.