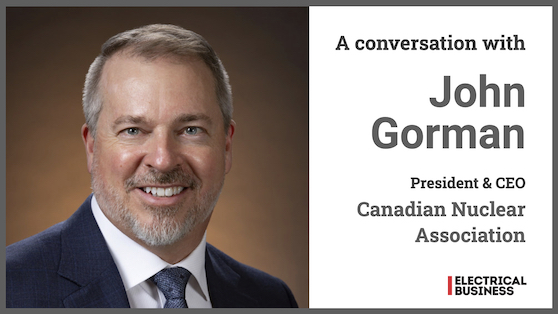 March 12, 2021 – You may have heard about a nuclear energy technology called small modular reactors (SMRs), or perhaps even read something about them in Electrical Business, but what are they, and who will use them?

To get a better understanding, I spoke with John Gorman, president & CEO of the Canadian Nuclear Association, who explains these innovative reactors are designed to be built economically under factory conditions, rather than onsite and, because they are modular, they can be custom-designed for the application at hand.

And those applications can range from serving Canada’s remote and smaller communities not easily connected to the grid, to our resource industries, such as mining and oil extraction. Plus, SMRs promise more than just electricity, as they could also be used to produce heat, and possibly hydrogen.

In Canada, industry is exploring—not one or two—but about a dozen SMR technologies, John says, which means we are well-positioned to take the global lead on this climate-friendly technology.

According to CNA, a conservative estimate of the global export potential of SMRs is $150 billion per year for 2030 to 2040. This figure includes applications for electricity generation, remote mine sites, island nations and off-grid communities. But the global market could be much larger were countries to adopt SMRs as a key tool in reducing (and possibly eliminating) fossil-fuel use for electricity generation.

But we have a choice… do we choose to support and fund the development and home-grown expertise of small modular reactor technologies, or play follow-the-leader?

Considering Canada’s legacy of nuclear excellence, it would be a shame if we didn’t.