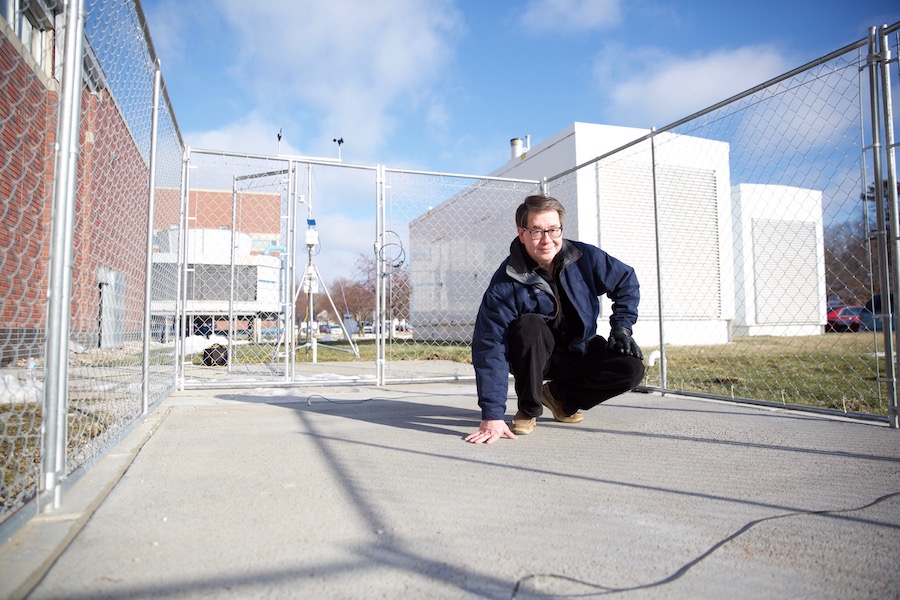 January 22, 2016 – University of Nebraska-Lincoln professor of civil engineering Chris Tuan has added a pinch of steel shavings and a dash of carbon particles to a concrete slab to create self-melting concrete.

Though the ingredients constitute just 20% of Tuan’s otherwise standard concrete mixture, they conduct enough electricity to melt ice and snow in the worst winter storms while remaining safe to the touch.

Tuan’s research team is demonstrating the concrete’s de-icing performance to the Federal Aviation Administration during a testing phase that runs through March 2016. If the FAA is satisfied with the results, Tuan says the administration will consider scaling up the tests by integrating the technology into the tarmac of a major U.S. airport.

“To my surprise, they don’t want to use it for the runways,” Tuan said. “What they need is the tarmac around the gated areas cleared, because they have so many carts to unload—luggage service, food service, trash service, fuel service—that all need to get into those areas. They said that if we can heat that kind of tarmac, then there would be [far fewer] weather-related delays. We’re very optimistic.”

In 2002, Tuan and the Nebraska Department of Roads made the 150-ft Roca Spur Bridge the world’s first to incorporate conductive concrete. Inlaid with 52 conductive slabs that have successfully de-iced its surface for more than a decade, the bridge exemplifies the sort of targeted site that Tuan envisions for the technology.

“Bridges always freeze up first because they’re exposed to the elements on top and bottom,” Tuan said. “It’s not cost-effective to build entire roadways using conductive concrete, but you can use it at certain locations where you always get ice or have potholes.”

PHOTO: Chris Tuan, professor of civil engineering at the University of Nebraska-Lincoln, stands on a slab of conductive concrete that can carry enough electrical current to melt ice during winter storms. Photo Scott Schrage/University Communications.

Potholes often originate from the liberal use of salt or de-icing chemicals that can corrode concrete and contaminate groundwater over time, Tuan says, making the conductive concrete an appealing alternative with lower operating and maintenance costs. The power required to thermally de-ice the Roca Spur Bridge during a three-day storm typically costs about $250—several times less than a truckload of chemicals, he says.

“I have a patio in my backyard that is made of conductive concrete, so I’m practicing what I preach,” Tuan said.

Tuan developed the concrete with the assistance of Lim Nguyen, Bing Chen and Sherif Yehia. The FAA is currently funding the team’s research, which also received past support from the Nebraska Department of Roads.