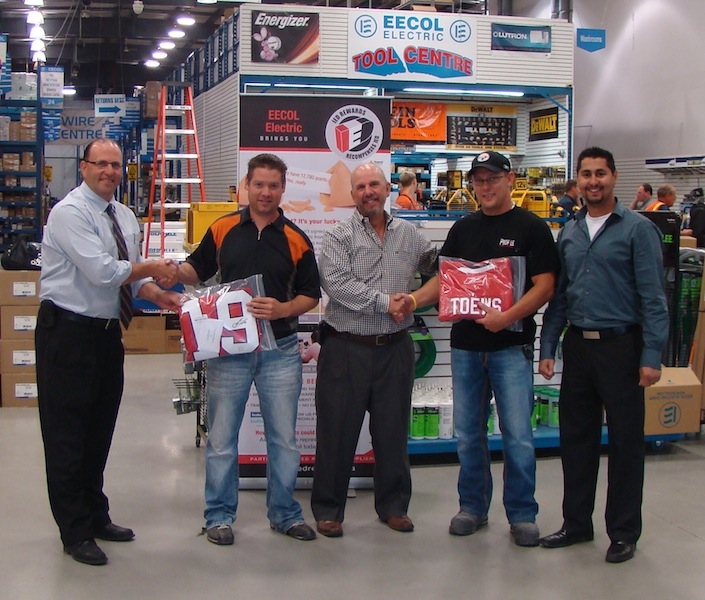 October 21, 2011 – With over 3200 players and 80,000 pucks shot, the IED Rewards “Light It Up and Win” contest has concluded, and those who finished in the Top Six in scoring have won the hockey trip of a lifetime: the IED Rewards ‘Original 6’ Ultimate Hockey Road Trip!

The IED Rewards Original 6 Ultimate Hockey Road trip is an all-expense paid trip to three NHL hockey games, including private jet, hotels, meals, games and ultimate surprises. The first stop in the circuit is New York to catch the Rangers and Montreal Canadiens in action. The following morning, winners will hop aboard their private jet and dash off to Chicago where they will see the Blackhawks take on the Vancouver Canucks. The final stop is Boston, where the Stanley Cup Champions—the Bruins—take on the New York Islanders.

It’s not called the IED Rewards ‘Original 6’ Ultimate Hockey Road Trip for nothing!

The winners also selected an employee from the IED Rewards branch with which they deal to join them on the road trip.

(Customers picking up product at participating IED branches also took part in the contest. These individuals earned shots for the online hockey game, where the highest score won. Every participating branch awarded one autographed NHL jersey to these winners, which translates into over 100 jerseys that were distributed for this promotion.)

The exclusive IED Rewards ‘Original 6’ Ultimate Hockey Road Trip will be an unforgettable experience, to be sure!

Related
Who’s taking the Ultimate Hockey Road Trip in 2015?
Winners announced in “The Ultimate Race Weekend” promotion
AD Rewards reveals winners of ‘Redeem for a Dream’ contest
Oleg’s Electric drives off with loaded Camaro after Spice Up Your Summer Promo