Products Wiring - Cabling - Devices
Wire inspection at the speed of light, by Fraunhofer 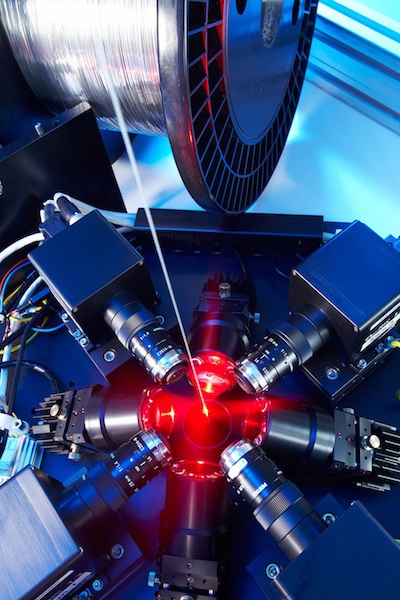 April 17, 2014 – Researchers at the Fraunhofer Institute for Physical Measurement Techniques IPM in Freiburg say their optical inspection system—WIRE-AOI—can detect defects in strip products that are manufactured at high-flow velocities, like wire and pipes, in real time.

The inspection system detects micro-defects that zoom past it at 10 metres per second, and are no thicker than a human hair. Workers then see the processed defects depicted graphically on a monitor, and can remove the corresponding pieces. The system marks the location of the defect, and stores the associated camera image in a database. This way, the makers of strip products can identify, classify and document defects during production.

Four high-speed cameras deliver the images of the defects; each one is capable of shooting 10,000 images per second, and processing them in real time. Prerequisite for this peak performance are cellular neuronal networks, explain the researchers.

“That means each pixel is itself a computer in its own right,” said Dr. Daniel Carl, group manager for Inline Measurement Techniques at IPM.

An LED light developed by Carl’s research team puts sharpness into the camera images. Its light shines at 5 millionth of a second—as bright as 100 suns—and flashes 10,000 times per second. “The image does not blur since, in such short periods of time, in principle nothing moves—even at speeds of up to 10 metres per second,” Carl added.

The inspection process has matured to the point that the scientists are now offering it to wire pullers.