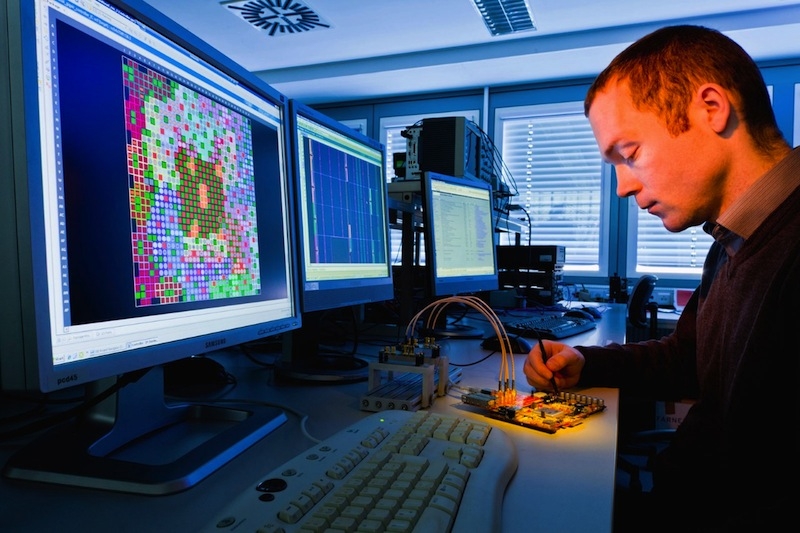 October 11, 2012 – Frank Deicke, a researcher at the Fraunhofer Institute for Photonic Microsystems IPMS in Dresden, Germany, wanted to find a way to transfer large amounts of data quickly and easily from one device to another. Wireless connections like Bluetooth or Wi-Fi are commonplace, but transferring several gigabytes of film data wirelessly can take several minutes. Deicke and his colleagues took a different approach.

Deicke specializes in infrared technology and, a few weeks ago, the researcher presented an IR module that transfers data at a rate of 1 gigabit per second (Gbit/s). “To put this into context, one e-mail character has a size of eight bits. The infrared module is able to transfer 125 million characters per second,” Deicke explained.

This performance is above all due to high-speed signal processing, say the researchers. In data transfer, the bottleneck is the encoding and decoding of the data, which is to say the packing and unpacking necessary to send data through the air. Before setting off, video information from the digital camera first has to be converted into a radio signal. The receiving device then decodes the radio signal and converts it back into film data. All this costs processing time.

The challenge for Deicke and his team was to build a small infrared module with fast-working hardware and software. In addition, the processing time required should be minimal, because the harder the microprocessors have to work, the more electricity they eat up. “We achieved this ultimately through a clever combination of different technical solutions,” said Deicke.

One of these is the transceiver, an optical component which is able to send and receive light signals simultaneously. The transceiver is only about the size of a child’s fingernail, but manages to fit in a laser diode to send light pulses and a photo detector to detect them. The decoders that receive and translate the encoded data are also crucial. Deicke and his colleagues had to program error-correction mechanisms, because the light signals become weakened and distorted in the air. Just like controlling a TV with its remote, there has to be a clear line of sight between sender and receiver. This is no problem for Frank Deicke: “You simply place the camera or the smartphone next to the computer or laptop”. The video is transferred in just a few seconds.

The IPMS researchers are very much aware that manufacturers have to accept such technology as standard before it can catch on. Only then will it find its way into a variety of devices, enabling consumers to connect almost any laptop to any camera without problems.

“Our current infrared module has already demonstrated that infrared technology is able to go far beyond established standards. We plan to improve performance even more in the future” Deicke said.