“I do try to encourage many people to come into the trades, because I think it’s a really great career for anyone. It sure gave me a lot of options.” 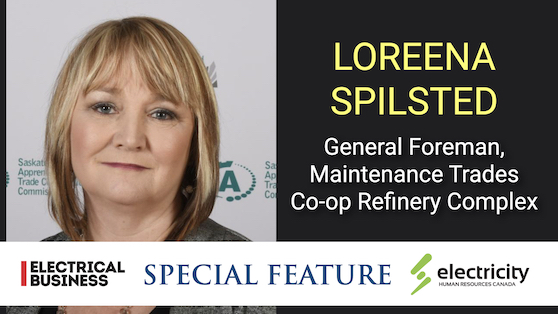 This is Loreena Spilsted’s Story

Loreena did not know what she wanted to do when she finished high school, so her mom—a teacher—“chose what I was going to do”. Dutifully, Loreena attended university to become a nurse, because “that was seen as a very viable career for a lady to go into”.

But her career path took sharp turn when she worked at a mine as a summer student, “because you can make really good money in mining, and I wanted to pay my student debt down”.

That, plus the fact that Loreena had a child of her own when she was 16, “So being able to support [myself and my child] and pay student debt and go to school was something that I needed to be able to do”.

The mine’s electrical shop needed someone to perform basic tasks, so Loreena became an electrical labourer, “and it really sparked my interest in a career as an electrician, and I was lucky enough that I was given the opportunity to stay at the mine beyond the summer, because I really didn’t want to become an RN”.

So Loreena stayed at the mine and, when an apprenticeship opportunity opened up, she was able to officially start her career in Electrical.

“There were negative comments about it being a waste of an apprenticeship, as a woman couldn’t physically do the work,” Loreena recounts, “and there were times you knew you got assigned a job because they were hoping it would be too hard, and you would fail.”

And so, being one of the few women in the trades in late 1980s, Loreena had to prove herself time and again, because it was hard for some people to believe a woman could do this type of work. 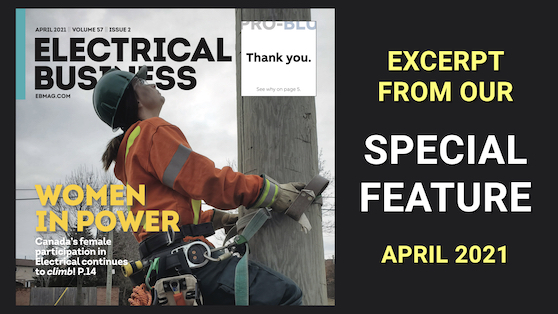 “I am thankful that there were also some others who were inclusive and supportive, as it was a very different landscape from where workplaces are today with regard to harassment and inclusion.”

But she loved the work. Loreena went on to become both a Red Seal Industrial Electrician and Construction Electrician. With the skills she’s learned, Loreena chuckles that an added bonus is “I don’t need to hire someone if I want to change a light bulb or do other stuff”.

But what about Loreena’s mom, who had insisted she attend university and become a nurse?

“I remember when I told her I wasn’t going back to university—that I was going to stay and work at the mine (and I had just taken an apprenticeship in the electrical trade)—and her comment to me was ‘Why would you do that? You’re so smart, you could do anything’.”

And Loreena could tell her mom was disappointed. “But a few years later, I remember coming home, and I was a single parent, driving a new vehicle on vacation with my daughter. And I remember her asking me ‘How much do you actually make as an electrician?’, and I told her, and she said ‘You actually make more than I do!’. And she was a teacher, and she had her Masters, as well.”

At that moment, Loreena knew she was doing okay.

Her career in electrical started in the mines at home in Saskatchewan, but her work also took her to The Yukon, and even Africa, before she ended up back in her home province. All well and good, but Loreena’s career was due for another course change.

“I just had another child, and realized I’d already raised two children on shift work,” she confides. “At that point I decided was going to make a career change, and took a job with the Saskatchewan Apprenticeship Commission.”

And she must have done bang-up job because, just last year, she was the recipient of the 2019 Red Seal Award of Excellence.

“So I started out at the commission as an entry-level consultant, and worked my way up to eventually being the chief operating officer. And I sit on the Skills Canada board and do a lot of other work to try and get girls to consider careers in trades and technology… I guess they thought I did a good job […],” Loreena says, humbly.

When Loreena first entered the trades, there weren’t many other women, but she recognizes that things are slowly improving.

“When I went to school, you didn’t get the option of taking the shop classes, you had to take HomeEc. I had to learn how to sew; I learned how to make a white sauce, and a red,” Loreena remembers. “I’ve never used those recipes, or actually cooked any of that, but I did have to learn it.”

“A lot of parents still have a stigma about their children entering the trades,” Loreena notes. “When I can look out and see that [the trades] are considered as often as university, that’s when I’ll think we’ve made it.”

“I do try to encourage many people to come into the trades, because I think it’s a really great career for anyone. It sure gave me a lot of options.”