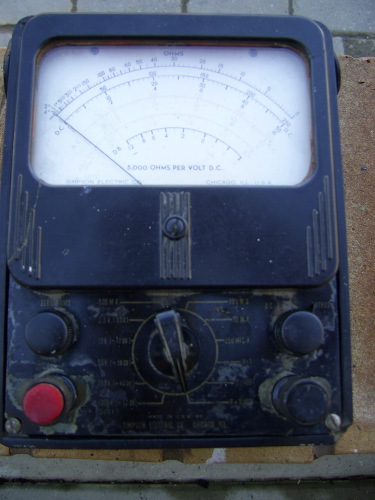 Discovered by a Royal Navy diver in a sunken WWII-era vessel off the Island of Singapore, a 65+ year-old Simpson meter was discovered, cleaned off and given a new battery. Remarkably, it worked!

The
analogue meter, manufactured by Simpson Electric, was a mystery to
employees at the plant, which is owned and operated by the Lac du
Flambeau Tribe. It seems the meter “had outlived all of the employees”,
said Lynn Beyer, an international representative who investigated the
model and age of the meter.

The
inquiry about the meter came from its owner, Nigel James, a resident of
the United Kingdom. He said it had been in his family since it was
found by the diver in the 1960s, saying it “still works fine”.

“I am
surprised that the unit worked after all this time in the water,” he
added. “The pivots must be rusty, so I’m sure it has a lot of friction.”

Milt
Novak, a Simpson Electric employee and an expert on test equipment,
surmised the meter was a government-issued unit. The discovery brought
many to the conclusion that it was issued to a U.S. naval ship and,
sadly, outlived the many who were on the vessel when it went down.

(Thanks to our friends at techniCAL Systems 2002 for sharing this story.)