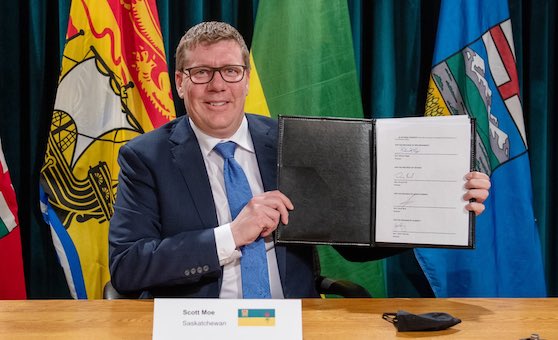 April 21, 2021 – Last week, the premiers of New Brunswick, Ontario and Saskatchewan formally welcomed Alberta as a signatory to the small modular reactor (SMR) Memorandum of Understanding (to which the others have already signed), and to release the SMR Feasibility Study.

The provinces, including Alberta, have agreed to collaborate on the advancement of SMRs as “a clean energy option to address climate change and regional energy demands, while supporting economic growth and innovation”.

“Today’s announcement confirms the commitment of our provinces to advancing SMRs as a clean energy option, leveraging the strength and knowledge of each of our jurisdictions,” said Saskatchewan Premier Scott Moe.

The SMR Feasibility Study was conducted by power utilities in the first three MoU provinces, and was formally requested as part of the MoU signed in December 2019. The study concludes SMRs would support domestic energy needs, curb GHG emissions, and position Canada as a global leader in this emerging technology.

STREAM 1 proposes a first grid-scale SMR project of about 300 MW constructed at the Darlington nuclear site in Ontario by 2028. Subsequent units in Saskatchewan would follow, with the first SMR projected to be in service in 2032.

STREAM 2 involves two 4th-generation, advanced SMR designs that would be developed in New Brunswick through the construction of demonstration units at the Point Lepreau Nuclear Generating Station.

STREAM 3 proposes a new class of micro-SMRs designed primarily to replace the use of diesel in remote communities and mines. A 5-MW gas-cooled demonstration project is underway at Chalk River, Ont., with plans to be in service by 2026.

The next action identified in the MoU is the development of a joint strategic plan, expected to be completed this spring.

“We will only meet climate change goals through a swift transition to clean energy sources. This will require the adoption of existing and emerging low- carbon technologies, including small modular reactors,” said John Gorman, Canadian Nuclear Association.