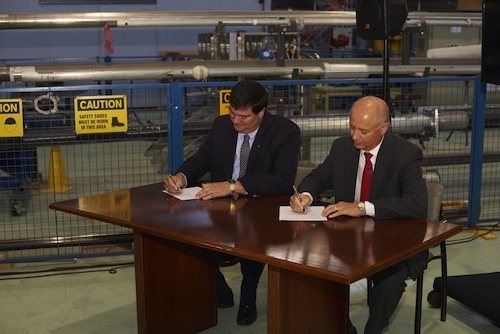 October 6, 2016 – A framework agreement of up to $400 million has been signed between two Ontario-based nuclear organizations.

SNC-Lavalin will be responsible for the tooling required to perform the removal of pressure and calandria tubes, the installation of new components, the design of feeder pipes and integral fittings, supports and related nuclear components, and the deployment and maintenance of a number of reactor inspection tools on the Bruce Power refurbishment project, which will begin in 2020.

“We believe our role, if fully implemented in the first Major Component Replacement project, will create up to 150 Ontario-based jobs at SNC-Lavalin and up to another 900 direct and indirect jobs across the province,” said Preston Swafford, SNC-Lavalin’s chief nuclear officer and executive vice-president in nuclear.

Bruce Power’s site in Tiverton, Ont. is home to eight CANDU reactors and the company says each one capable of generating enough electricity to meet the annual needs of a city the size of Hamilton.