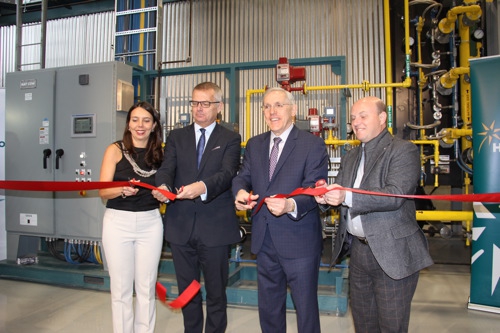 March 31, 2016 (updated with video April 25, 2016) – Campbell Company of Canada officially unveiled its combined heat & power (CHP) system at its Toronto plant today, in partnership with Toronto Hydro. The company says it’s their only site in North America to boast this technology.

Efficiency is a priority at Campbell’s, president Ana Dominguez said, and CHP was the next step in becoming more sustainable, as now the facility can produce enough energy to power itself, providing reliable emergency backup power (soup production that never stops!) and saving on electricity costs.

CHP is a technology that uses a natural gas-fuelled engine to drive a generator, which produces electricity and heat. The heat generates steam, which is used to cook soup. The company claims its CHP plant now supplies up to 93% of its annual steam requirements.

Toronto Hydro CEO and president Anthony Haines as well as Bob Chiarelli, Ontario’s minister of energy, were also on hand to cut the ribbon in front of the CHP turbine.

“By having electricity generated here locally, it means a little extra room for us to add new customers to the grid without having to add new capacity,” Haines said. “Simply put, it’s a real win-win.”

Toronto Hydro helped make CHP a reality by arranging $5 million in incentive funding through the saveONenergy program, which amounted to about 40% of the project, Campbell’s noted. The total cost was $12 million.

The facility remains connected to the grid and Toronto Hydro said it will continue to supply a small amount of electricity on a daily basis, as well as full power when necessary, making system repairs easier.

“It’s like you’ve built your own insurance policy,” Haines said to Galvin as he toured around the turbine and generator.

Guests of the unveiling watched as engineers started the system up and output levels based on the connection to the grid began to switch. Everyone received a surprise when about 15 minutes later, the motors began generating too much power, causing everything to shut down.

“The system had reached export mode,” explained David Culham, project manager for the system. “We don’t have a contract to sell the power back to the grid so it has to shut down when this happens.”

It’s a balancing act with the grid, Galvin added.