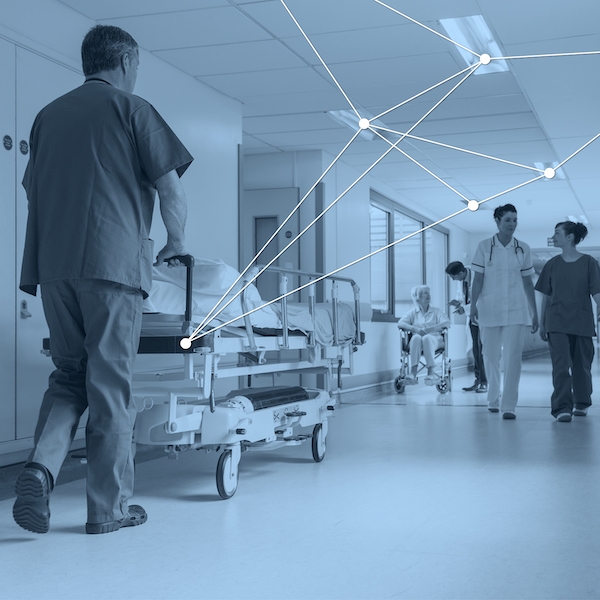 June 19, 2019 – Emergency lighting has long been seen as a nuisance by building maintenance and operations teams. To comply with safety regulations, such as CSA C22.2 No. 141 and NFPA 101 (Life Safety Code), these personnel used to have to walk throughout their building regularly to check every emergency exit light and test their batteries.

Newer emergency luminaires have simplified routine diagnostics by providing red and green indicator lights and even self-testing features. Nevertheless, operations personnel have still needed to inspect and log each light.

Now, however, they can instead connect all of their emergency lights to a single, centralized infrastructure for monitoring and control. This allows them to inspect and test the lights from any location and detect problems before a luminaire fails.

For this infrastructure, the same ready-made network that handles data traffic, including Internet of Things (IoT) applications, can be extended to manage an entire building’s lighting. It can also make the building safer and more secure by supporting related emergency applications.

To help create this ‘smart’ emergency lighting infrastructure, luminaire manufacturers have designed new lighting systems for plug-and-play communications. With their on-board functionality, these luminaires are even becoming a viable foundation for building automation system (BAS) controls.

Intelligent LEDs
LEDs are key to enabling ‘intelligent lighting.’ This is because they are already built around semiconductors, so they offer embedded programmability.

An LED engine’s microcontroller can adjust lighting characteristics. Hence, LED-based luminaires can be programmed to brighten, dim, heat, cool and use more or less energy.

This has proven particularly useful for retrofitting luminaires where there is a need to match existing lighting characteristics to ensure consistent illumination and colour temperature. By using the embedded programmability of LED components, users can specify hues and brightness levels.

As mentioned, newer emergency LED drivers now include built-in diagnostics and self-testing as part of their on-board intelligence. Further, to comply with safety standards for emergency lighting and automatic test systems, all of these luminaires need to be equipped with two-colour (i.e. red and green) readiness indicators.

Automated testing
Regulations also call for monthly and annual testing, with the results recorded in a log. This testing must include verifying battery operations by simulating a failure to ensure the luminaire is working properly.

The regulations for annual testing involve the same procedure as those for monthly testing, except the emergency lights need to be operated for their full rated duration (normally three hours) to confirm the batteries work properly. Upon completion of this testing, all of the lights need to return to their ‘readiness state,’ once power is restored and the results are logged.

With added capabilities like these, while maintaining ease of use, new emergency lighting systems can make buildings even safer.

Consider, for example, the potential for intelligent building evacuation. With sensors embedded in emergency light fixtures, it would become easier to identify parts of a building that pose a danger, such as fire. Those same sensors could then be used to activate lighting to help direct occupants to a safe exit point, rather than inadvertently leading them through or into danger.

Delivering centralized control
Since emergency lights are installed at strategic locations throughout a facility, they provide an ideal set of end points for a building-wide management and control infrastructure. All you need to do is add the programmable sensors to the luminaires.

As the sensors are connected, they will form a communications network. The two basic options for such a network are wired or wireless.

Wired connections may make sense in new construction, where you can plan out the network in advance. Some luminaire manufacturers have even experimented with Power over Ethernet (PoE), whereby the same cabling provides both power for lighting and data for communications.

New construction, however, comprises only a small fraction of the commercial building space. In most cases, building owners are instead looking to retrofit existing lights with LEDs to save on their operating costs.

In such situations, hard-wiring luminaires into a single system can be cost-prohibitive and impractical. Enter wireless communications. By equipping emergency LED lighting with built-in support for wireless communications, such as Bluetooth mesh networking, you can develop a building-wide lighting control infrastructure without having to rip out or replace any existing wiring.

A mesh network
While Bluetooth is a mature standard for device-to-device communications, Bluetooth mesh is newer—conceived in 2015 and introduced in 2017—and can establish a broadcasting grid to reliably link multiple devices to each other. Like Bluetooth, it is an open, manufacturer-independent standard, so any vendor can create interoperable products.

Unlike other types of data networks that require hubs and routers, Bluetooth mesh is a low-energy, radio-based protocol where each device broadcasts the same data to all other devices within range. The beauty of this approach is it is extremely reliable and scalable. Since the connection points (or nodes) in the mesh network relay all of the messages, if one node fails, then the data is sent through adjacent connection points, so there is never a failure. Also, devices can be added to or removed from the mesh without causing disruptions.

For emergency lighting testing, Bluetooth mesh makes it easy to initiate and log the tests from a central console, saving time and resources while ensuring regulatory compliance.

Sensors can be deployed to detect fire, smoke, carbon monoxide, sounds (e.g. gunshots) and other hazards. Collecting this data can support machine learning, so as to identify secure paths to safety and to activate specific emergency lights to light the way. The same sensors can even detect room occupancy, to determine if and where people may be trapped.

In addition to such emergency-related purposes, the network can help automate everyday building management systems. Heating, ventilation and air conditioning (HVAC) systems can respond to changing temperatures on a localized basis. Luminaires can be dimmed in response to ambient light levels, but also, window blinds can be activated. A tenant’s smartphone can issue commands to open doors for specific areas. ‘Tagging’ can help track assets throughout the building. And Bluetooth-enabled ‘beacons’ can assist in wayfinding.

To consolidate all of these building controls, however, you need a common language to enable interoperability between devices. A building might use Digital Addressable Lighting Interface (DALI) for dimming its lights, but a separate system for managing HVAC.

IoT is proving a viable ‘lingua franca’ for all types of devices, but you still need a common control interface. One example is Elitedali, which is based on Tridium’s Niagara framework.

A common platform that integrates lighting with other building features makes it easier to automate advanced functions, such as using smoke sensors to trigger lights, doors and alarms to help direct occupants to safety in case of fire.

In these ways, what was once a nuisance for building managers can now offer advanced diagnostics and analytics. Indeed, emergency lighting retrofits can lay the foundation for a new era of building automation.

Russ Sharer is vice-president (VP) of global marketing for Fulham, a supplier of commercial lighting components. This article is based on a seminar the company presented at the 2018 LED Professional Symposium (LPS) in Bregenz, Austria. For more information, visit www.fulham.com.

This article appeared in the June 2019 issue of Electrical Business magazine.