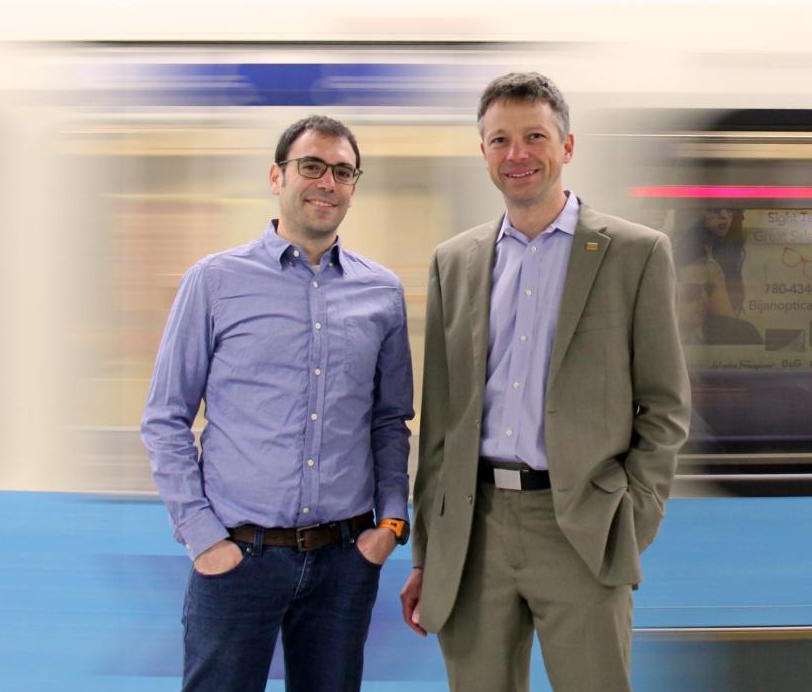 September 1, 2016 – University of Alberta mechanical engineering professors Pierre Mertiny and Marc Secanell recently calculated that the use of flywheel technology to assist light rail transit in Edmonton, Alta., would produce energy savings of 31% and cost savings of 11%.

“The flywheel is an old technology, but that’s partly what makes it so sensible,” said Mertiny. “Fundamentally, it’s a really simple technology. We already have everything we need.”

A flywheel rotates and increases its rotational speed as it is fed electricity. This rotational energy can then be turned back into electrical energy whenever it is needed. The system loses very little energy to heat or friction because it operates in a vacuum and may even use magnetic bearings to levitate the rotor.

Secanell and Mertiny examined the possibility of using flywheel technology to store energy generated when the city’s LRT trains decelerate and stop. Trains such as the LRT are designed with so-called dynamic braking, using traction motors on the train’s wheels, for smooth stops. But the deceleration generates energy, which needs to go somewhere.

“Electric and fuel cell vehicles already implement regenerative braking in order to store the energy produced during braking for start-up, so why would trains not be able to do so?” asks Secanell, whose research also focuses on fuel cell vehicle technologies.

Currently, that electricity is considered ‘dirty’ because it is intermittent and difficult to use. Conventional systems simply send the braking electric power to resistors on the train, which convert the electrical energy to heat, which is then released into the air.

“It’s difficult to use a conventional battery for this purpose,” explained Mertiny. “You need to recharge and discharge a lot of energy very quickly. Batteries don’t last long under those conditions.”

Mertiny and Secanell predict that using a flywheel to capture the electricity generated by a train’s deceleration and applying it for acceleration would produce an energy savings of 31% and cost savings of 11% on the Edmonton LRT system. A flywheel system could result in substantial energy and cost savings for the city.