“They don’t know their lives may be at risk, so they continue working.” 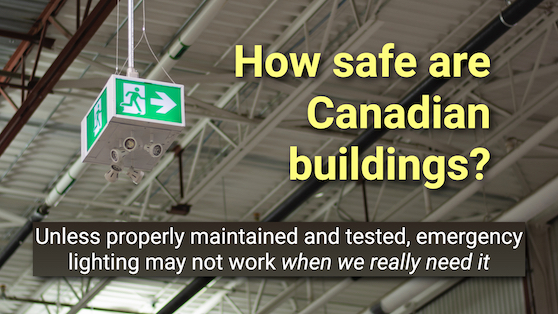 Unless properly maintained and tested, emergency lighting may not work when we really need it. Photo courtesy Aimlite.

April 26, 2021 – Unless they’re in the industry, or are in a building during an emergency, people generally pay little to no attention to emergency lighting. Too few people think about its proper care and maintenance until it is needed. And therein lies the problem.

To learn more about emergency lighting and where we, as a society, are falling short, I turned to Kevin Smee and Jeff Beare of Aimlite, who collectively have decades of experience in this field.

“The first thing that we need to talk about, really, is the reason why emergency lighting exists in the first place,” Jeff said. “In the case of an emergency, its primary purpose is to guide people out of a building to safety.”

“What a lot of people don’t realize is the first thing that happens when first responders arrive to a fire scene is they cut the mains—they cut power to the building—to protect the firefighters who are entering the building,” Jeff continued. “They’re spraying down the building with water; and if there’s one thing that should not mix with water, it’s electricity.”

So the lights go out, and that’s when emergency lighting is supposed to take over and help guide any remaining building occupants to safety.

(“As an aside, what is not intended is for employees to continue working at their workstations until the power comes back on which, unfortunately, is what a lot people use emergency lighting for,” Jeff pointed out. “They don’t know their lives may be at risk, so they continue working.”)

Much like airbags or a seatbelt, you want your emergency lighting to shine in case of an emergency (pardon the pun). But unlike those automotive safety systems, emergency lighting needs to be tested on a regular basis, and the Canadian Fire Code (plus manufacturers themselves) provide the protocol for doing this correctly so as to keep this important building safety system ready for action.

“So it’s the responsibility of the end user—whoever is responsible for that space—to conduct proper testing,” Jeff said.

That protocol includes momentary testing, where you press the Test switch on the side of the unit. When the light comes on, you’re good to go. Every 6 months, the unit is required to undergo a 15-minute discharge test; then, every 12 months, a full discharge test.

For the annual test, the owner (or his technicians) will open the breakers that are designated for emergency lighting, then walk through the entire facility to see which units are lit and which are not, and whether they are lit for the prescribed amount of time.

Across Canada, the minimum prescribed run-time for emergency lighting is 30 minutes and goes as high as 120 minutes, depending on the type of building prescribed in the National Building Code (see A-3.1.2.1.[1] Major Occupancy Classification), with the exception of Newfoundland & Labrador, where the minimum run-time is 90 minutes. Why is that?

“I met the fire marshal of that province, and he is a firefighter at heart,” Kevin said. “He wanted 90 minutes for Newfoundland & Labrador to give all the volunteer firefighters more time to attend the scene.”

(Which makes perfect sense. Urban areas may have dedicated fire departments, but how much of Canada is still considered “rural”, relying solely on those community volunteers?)

And so 90 minutes became the protocol for the entire province. “And this gentleman is not an engineer or consultant or building operations guy… he’s a firefighter, and he knows what works. And he is lobbying for other rural fire departments across Canada to adopt the same protocol,” Kevin continued.

According to Jeff and Kevin, reputable products with modern LED heads can easily stay lit for 90 minutes… or for several hours. In their opinion, minimum run-times should be revised in an eventual National Building Code review to a minimum of 120 minutes, if not 180 or greater. With the advent of LED technology, emergency lighting duration is nearly limitless.

Where things fall off the rails

“Reputable emergency lighting manufacturers provide all the required information for maintenance and testing, and you can find it online, too,” Kevin noted. Unfortunately, “once a new construction or a renovation has been completed, the testing information often does not get passed over to the owner of installation,” or it gets bundled up with a host of other binders, collecting dust on a shelf somewhere.

“And then, the only time the emergency lights get tested is when there is a power failure or a brownout,” Kevin continued. “At that point, it’s too late… you’re not going to get the maximum duration for which the battery was designed.”

Kevin uses this fitness analogy: “A battery needs to be exercised and cycled. But too much of a good thing is not good for the battery. So if you cycle it too much, or exercise it too much, you reduce the longevity of that battery. But not exercising it enough, or not at all, means it will never be ready for that marathon” (i.e. a power failure).

“So we need to find a balance. We need to educate more end users, and have more training,” Kevin said, adding that they get a lot of requests from consultants seeking information they can include in a manual, “but who’s going through those manuals and explaining all this information?”.

“And then, when something doesn’t work, they’re going to call in someone to fix the problem who may not be trained,” Kevin warned.

That person may swap some batteries (which may not even be the right batteries), and so long as the heads light up, the owner will think the emergency lighting is as good as new. But that’s false peace of mind, Kevin said. “Swapping a battery does not address the underlying problem, or problems. Did anyone even look at the alignment of the heads, or whether they are damaged?”

When it comes to emergency lighting maintenance, it is strongly recommended that replacement parts come from an original parts supplier.

While on the subject, I asked Jeff and Kevin about some of the most common transgressions they’ve seen with emergency lighting that are not related to proper testing.

One problem that rises to the top of the list is that, by code, you’re supposed to have tidy electrical connections in an octagonal box that is not located inside your running man sign. Otherwise, you end up with wires dangling inside the housing, and the sign won’t provide the required visibility at 100 feet.

“And we spend tens of thousands of dollars on CSA testing to ensure we get the best chromaticity ratio of Green and White, but if the unit isn’t installed correctly, it won’t look right,” Jeff said.

“And there’s a reason remote heads have an articulation joint… so you can align them properly,” Jeff continued. “The heads are not designed to be pointed up nor down. They’re designed to be angled to maximize the light down a hallway or path of egress. And the remotes are supposed to be spaced apart—say, at a minimum, 30 or 25 feet—yet you often see two remotes, pointed in random directions, which makes no sense.”

A big problem Kevin continues to encounter is found in the electrical room, where the emergency lighting is not on a dedicated breaker, nor properly identified.

“What often happens is, at the end of the day, a business owner will go to his panel, and click, click, click all the breakers to turn everything off for the night,” Kevin said. “This causes the batteries to deep cycle every single night until they’re dead.”

So those breakers should be locked off, Kevin suggests or, at the least, identified so as not to be switched off.

The next evolution in emergency lighting

These days, you cannot escape talk of “smart” this or “connected” that. With all the diligence required in maintaining it, emergency lighting sounds like a prime candidate for some form of digitalization, so I asked Jeff and Kevin whether “smarts” have made their way into emergency lighting products.

“Absolutely,” they said in unison.

Some new units being introduced to market are able to carry out their own diagnostics, and can be connected to the building automation system. “These units will perform all the required testing that nobody is doing, and the proper amount of exercise. So you’ll get the longevity for which the batteries are designed, and you’ll get true peace of mind, knowing exactly what’s going on with the remote head, the Running Man sign, and so on,” Kevin adds.

“For example, if I’m the custodian of a school, I would love to get an email notifying me that, in the cafeteria, No. 2 remote head is out,” Kevin said. “I now know exactly which unit requires service, and can take appropriate action.” No second-guessing.

And, if you are monitoring numerous facilities across an entire school board, you will be able to check on any one of your schools at any given time, 24 hours a day—from anywhere in the world. You can force a test, check the test logs—even set limits for those who have access to the testing.

As our buildings become increasingly connected, Jeff and Kevin expect company inspectors will begin demanding test results from emergency lighting systems to ensure they are in proper working condition.

“The future is bright and always evolving,” said Kevin, “and emergency lighting will guide the way.”