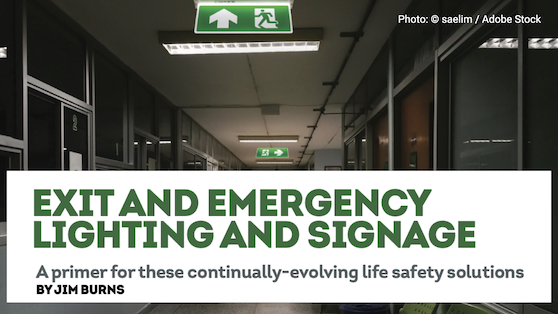 May 26, 2022 – Exit lighting and signs, emergency lighting… all are imperative for the timely evacuation of facility occupants in an emergency or power failure.

Adequate ambient lighting is required so that occupants can avoid trips or falls and safely navigate the egress route. Exit signs identify exit routes and doors, while exit and emergency lighting provides the required illumination for those paths of travel.

Requirements for the maintenance of these crucial items has continuously evolved over the years. The 1990 edition of the National Fire Code of Canada (NFC) included several new additions, including: the requirement to install exit lighting and exit signs per the National Building Code of Canada (NBC); the inclusion of exit lighting illumination while the building is occupied; and the requirement to maintain emergency lighting.

These requirements remained unchanged until the 2015 edition of the NFC. The latest revisions included provisions for the inspection, testing and maintenance of exit signs, which was not explicitly stated in previous editions.

Let’s review the requirements related to exit signs and exit lighting, explore some of the challenges with changes in exit signage, and look forward to where new requirements may go next.

I’ve already used the term exit lighting a few times, but you may never have heard this term before. It does not appear in the NBC, and only appears in Subsection 2.7.3 of the NFC. So what is it?

Subsections 3.2.7 and 3.4.5 of Division B of the NBC describe the requirements for the placement of exit signs and for emergency and non-emergency lighting.

The requirements in Article 3.2.7.1 of the NBC provide the minimum lighting requirements. Specifically, that

an exit, a public corridor, or a corridor providing access to exit for the public or serving patients’ sleeping rooms or classrooms shall be equipped to provide illumination to an average level not less than 50 lx at floor or tread level and at angles and intersections at changes of level where there are stairs or ramps.

In addition, the minimum value of the illumination required shall be not less than 10 lx. This is exit lighting. These values are the minimum lux required to provide illumination along the path of egress travel under normal power conditions i.e. not on emergency power. These sentences confirm that the intent is to limit the probability that egress routes and exits will have inadequate illumination, which could lead to safety hazards.

Exit signs help occupants identify the means of egress so they can find their way out of a building. The NFC requires exit signs to be:

The 2015 edition of the NFC included a new article 6.5.1.8 “Inspection of exit signs”. New requirements for exit signs included monthly inspections to ensure the signs are visible, identifiable and unobstructed.

In addition, exit signs must be tested annually to ensure they remain illuminated for the same duration as the emergency power supply requirement e.g. 30 minutes, 1 hour or 2 hours.

The 2010 edition of the NBC introduced requirements for the internationally recognized green pictogram sign (the Running Man). While the requirements were straightforward for the installation of these signs in new builds, it wasn’t so easy for existing buildings.

As a result, we observed every possible scenario, including the replacement of multiple signs within a single floor area. This led to red EXIT signs being installed within the same area as the new green pictogram signs.

There seemed to be a lot of confusion from both industry and authorities having jurisdiction (AHJs). Various jurisdictions provided interpretations on the how these new requirements were to be applied to existing facilities. Those interpretations were released based on when new code provisions were adopted. Interpretations were issued by several AHJs, including the cities of Winnipeg and Calgary, and the Province of Saskatchewan.

The consensus, as stated in “Winnipeg policy on exit signs installations in existing buildings” was that

generally speaking, mixing and matching of red EXIT signs and green pictogram signs in the same floor area will not be permitted.

The requirements were similar throughout each document, with the exception that Winnipeg and Saskatchewan include a retroactive requirement to replace the red EXIT signs.

The Bulletin from Calgary did not specify a specific size addition that requires the retroactive upgrading of the exit signs.

The moral of the story: always check with your local AHJ for specific requirements to avoid possible costly changes later.

Where do we go from here?

Earlier I wrote that exit signs are meant to identify egress routes and exit doors. Currently, exit signs are designed and installed with little regard for accessible design. I won’t delve into that now, but it opens the door to potential future changes that will incorporate inclusive requirements.

Dynamic exit signage, meantime, has been discussed and studied for several years. These exit signs receive signals from the building fire alarm system, or potentially other systems, and flash a Green arrow or Red X on the exit sign to dynamically direct occupants toward a safe exit. Again, this is not something I will get into here but, for a deeper dive, check out the Fire Safety Engineering Group at of the University of Greenwich.

Exit signs, exit lighting and emergency lighting will no doubt continue to evolve and change in the coming years. This may include more inclusive signage and/or designs, or maybe dynamic signage providing up-to-date building information to occupants during an evacuation. Or it may include smart sensors and devices to provide updates to occupants during an evacuation.

These new designs will require a detailed and thorough design approach, as I expect exit signage will play a larger and a more integral role in a facility’s egress and exiting strategy.

The design objectives and intent will need to be documented to ensure that not only the specific devices are maintained, but also that the egress and exiting strategy is maintained. As with all new technologies and change, there will be challenges and opportunities, but this is also what makes fire protection and life safety so interesting!

A note on photoluminescence

They are permitted to be installed as per the National Building Code, provided they meet the requirements of the noted standard and are installed in conformance with the manufacturer’s instructions.

Unfortunately, many of these types of signs have not been installed in conformance with the manufacturer’s instructions, or there have been changes to lighting systems or other alterations, thereby rendering these installations non-compliant.

Jim Burns, CFPS, has been in the fire and life safety industry since 2002, working in both the public and private sectors. He serves as a voting member on the Standing Committee for Fire Protection for the CCBFC, and is a regular contributor to the Kilo Lima construction code community. Jim currently works as a building code consultant with Celerity Engineering.