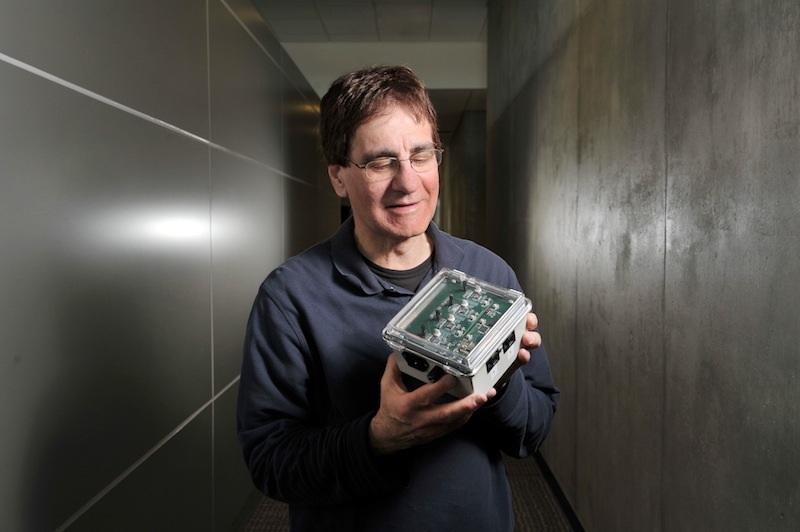 March 28, 2012 – Sandia National Laboratories has developed an experimental ‘smart outlet’ that autonomously measures, monitors and controls electrical loads with no connection to a centralized computer or system. The goal of the smart outlet and similar innovations is to make the power grid more distributed and intelligent, capable of reconfiguring itself as conditions change.

Decentralizing power generation and controls would allow the grid to evolve into a more collaborative and responsive collection of microgrids, which could function individually as an island or collectively as part of a hierarchy or other organized system.

“A more distributed architecture can also be more reliable because it reduces the possibility of a single-point failure. Problems with parts of the system can be routed around or dropped on and off the larger grid system as the need arises,” said smart outlet co-inventor Anthony Lentine.

Such flexibility could make more use of variable output energy resources such as wind and solar because devices such as the smart outlet can vary their load demand to compensate for variations in energy production.

The outlet includes four receptacles, each with: voltage/current sensing; actuation (switching); a computer for implementing the controls; and an ethernet bridge for communicating with other outlets and sending data to a collection computer.

The outlet measures power usage and the direction of power flow… which is normally one-way, but could be bi-directional when something like a photovoltaic system is connected to send power onto the grid. Bi-directional monitoring and control could allow each location with its own energy production—such as photovoltaic or wind—to become an ‘island’ when the main power grid goes down. Currently, that rarely occurs due to the lack of equipment to prevent power from flowing back toward the grid.

The outlet also measures real power and reactive power, which provides a more accurate measurement of the power potentially available to drive the loads, allowing the outlets to better adapt to changing energy needs and production.

Similar technology could be built into energy-intensive appliances and connected to a home monitoring system, allowing the homeowner greater control of energy use. What is different about the smart outlet is that distributed autonomous control allows a homeowner with little technical expertise to manage loads and the utility to manage loads with less hands-on, and costly, human intervention.

“With the increased use of variable renewable resources, such as wind and solar, we need to develop new ways to manage the grid in the presence of a significant generation that can no longer supply arbitrary power on demand,” Lentine said. “The smart outlet is a small, localized approach to solving that problem.”