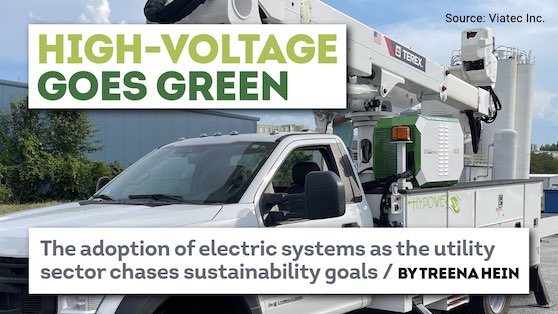 November 1, 2022 – Both private and municipality-owned utility firms are adopting electric technology across Canada and the U.S., and not just for ‘green’ reasons or by being forced to meet diesel emissions restrictions.

Ferri explains that conventional PTOs continuously burn fuel to operate whereas ePTOs draw power from their batteries only as needed. “This inherently saves a huge amount of fuel cost,” he says. “Fewer oil changes are required. In addition, with conventional trucks, the emissions-reduction systems regenerate periodically to burn off accumulated debris in the filters. This process doesn’t work well while parked and adds wear to the engine, shortening the vehicle’s life.”

On a maintenance efficiency note, Ferri adds that Viatec’s smart ePTO units “can be supported, reconfigured and updated remotely, such that Viatec can detect issues in operation before customers are aware and begin troubleshooting or monitoring as appropriate”.

Ferri also points out that hybrid trucks also cost substantially less to operate over their lifetime than conventional trucks.

Right now, Ferri puts the level of hybrid utility truck adoption across North America at maybe 5% or 8%, and all-electric at less than 1%. But, in his experience, Canada is leading the U.S. with both adoption rate and regulations. “In Canada, they clearly get the business case are committed to moving ahead,” he says. “They are keen to get it done and also provide feedback to make it work for them.”

Viatec ePTOs have been in Canada for over two years, distributed by Commercial Truck and Equipment Company of Canada. They are deployed in utilities that include Fortis, BC Hydro, Toronto Hydro and ATCO Electric.

SaskPower has purchased all-electric bucket trucks from Terex with the Terex Optima 55-foot aerial device, powered by the Viatec SmartPTO and mounted on an an International eMV Series battery electric 33,000 GVW chassis from Navistar. Introduced in June, they are the first all-electric bucket trucks on the North American market. They have a 217-km driving range, and the bucket operates for a full workday on a single charge.

Ferri explains that the maturation of ePTOs over the last eight years (in Viatec’s case, they are now universal to all platforms, quick to install and very reliable) has greatly accelerated the launch of the all-electric bucket truck sporting the Terex Optima.

“All-electric bucket trucks were expected to hit the market in 2024 but it happened in June 2022,” he notes. “A lot of effort and experimentation happened in the ePTO space over the past decade. The solution came into focus in 2017 with requirements from Duke Energy [in the U.S.] that propelled us forward.”

“They said ‘We need units that will last a full workday, are parallel [can’t take the truck down if they fail], are removable/transferrable [so that trucks can be re-sold without them] and that the crews like using.’ Then, Duke Fleet Management supported us in achieving that. Our ePTOs will be on all Duke’s material handlers by 2025 to 2027.”

Viatec has also released a 30-hp generator replacement for Duke’s stepvans this year, and will field-pilot them.

For its part, Terex has been working on green technologies for over a decade, says Joe Caywood, director of marketing. “As the technology evolved, we’ve integrated it into our product line,” he explains. “Bringing the electric bucket truck to market ahead of schedule has given customers a jump-start on meeting their electrification and sustainability goals. Many utilities have goals of 50% electric achievement by 2025, and 100% electric by 2030 to 2035.” 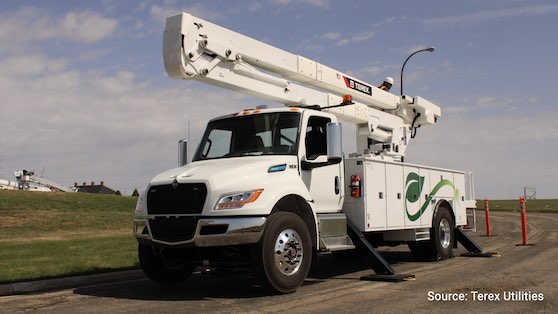 “Bringing the electric bucket truck to market ahead of schedule has given customers a jump-start on meeting their electrification and sustainability goals,” says Terex’s Joe Caywood. “Many utilities have goals of 50% electric achievement by 2025, and 100% electric by 2030 to 2035.”

Caywood notes that, back in 2007, Terex was part of the development of the first utility-focused ePTO hybrid system (called HyPower).

“At the time, the concept was right, but the technology was what was available at the time—but it needed to be simplified with less weight,” he says. “Our HyPower products continued to evolve, and we offered our plug-in hybrid PTO systems for both trouble truck (48V) applications and medium- to large-duty utility trucks. The HyPower solutions offered optional cab comfort systems in addition to running boom and outrigger functions from an advanced battery management system.”

The current Terex ePTO product—the HyPower SmartPTO by Viatec—is described as a plug-in system with simple connections to power all the hydraulic functions of the utility truck: from the outriggers to the boom of the aerial or digger-derrick. Like former HyPower solutions, the SmartPTO system also provides battery power to the chassis allowing auxiliary applications (e.g. lighting and optional cab HVAC) to operate while the truck engine is off.

The eMV chassis and SmartPTO are two completely separate systems, providing dedicated battery capacity for the truck rather than running the boom and outriggers off the chassis batteries.

“Like any battery-powered device, run-time varies significantly depending on usage and the choice of the battery package of the SmartPTO,” says Caywood. “There are four different battery sizes, and proper selection should ensure a full day’s use based on the customer’s use case.” Terex has a calculator tool to help with this.

For the electric utility segment, Navistar offers a battery electric medium-duty truck chassis with the truck bodies developed in partnership with manufacturers like Terex and Altec. 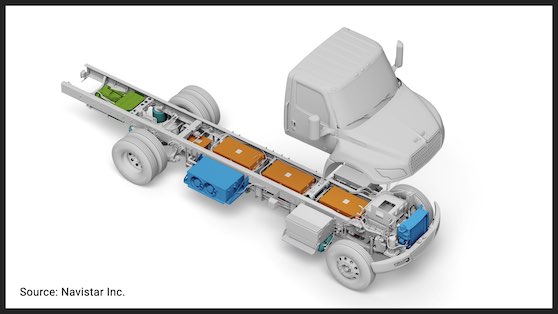 “Our research shows that battery electric-powered vehicles will be competitive with diesel across all key metrics and for all major applications,” says Shust, “to reach total cost of ownership parity.” Cost parity, in her view, will be the primary driver to higher adoption.

And Shust believes the adoption of electric technology will happen faster than expected. Savings with fuel and lower lifetime maintenance/operational costs aside, there are also various incentives and funding programs that will help drive early adoption.

In addition, Navistar offers a range of services for utilities and other customers to help them transition to electric vehicle use. These include route planning, grant writing and support for charging infrastructure.

“We also work with our body integration partners and other truck equipment manufacturers to continue to expand the capabilities of our products,” says Shust. “We are helping with integration on battery-electric vehicles, expanding ePTO coverage, constantly evaluating component offerings such as axles, suspensions and safety systems.”

Shust adds that the expansion of vehicle connectivity capabilities is also helping drive higher efficiencies. She says over-the-air software update capabilities that allow for repairs to be completed remotely are the next step toward maximizing uptime even further.

On the equipment side, Milwaukee has created an entire line of battery-powered products called MX to assist its customers in meeting emissions-reduction goals. Some examples of this are the 14-in. cut off saw, 1800/3600-W power source, breaker and coring drill.

In addition, the MXF041-1XC Rocket tower light offers an emissions-free alternative for those who have historically used gas-powered site lighting. It provides 27,000 lumens of task or area lighting that can be used inside or out, with 10 hours of run-time on one charge. Through field trials and testing, Milwaukee has shown use of this light can save customers up to $1300 a month over a diesel tow-behind light. 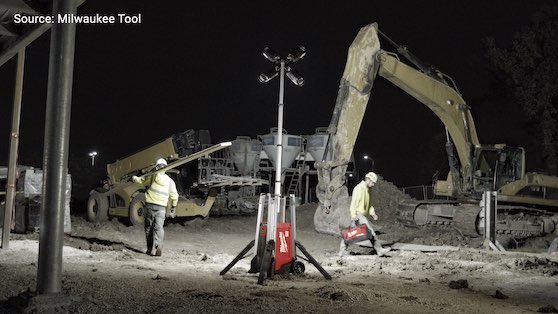 Milwaukee has created an entire line of battery-powered products called MX to help customers meet their emissions-reduction goals. The MXF041-1XC Rocket tower light offers an emissions-free alternative for those who have historically used gas-powered site lighting.

Mike Burke, manager, Core Trades for Milwaukee Tool, is confident the MX lineup will exponentially increase in the next five to ten years.

Reflecting on the current trend of electrification, Ferri believes a mindset shift is occurring; from seeing the role of the truck engine as the primary stationary power source at worksites to backup for electric power units.

“We can’t go all-electric in a world where the power still goes out, but fleets can eliminate half their current emissions and greatly reduce their cost of ownership with strategic electrification,” he says. “But, as electric technology becomes more common, we’ll also need lots more charging capacity and, therefore, grid capacity must be added.”

Shust agrees that “we need the supporting charging infrastructure to build up around it, but we are confident that, with the right incentives, it will be there to support this transition. It is important that as infrastructure is built out, that those involved keep in mind the needs of heavy-duty commercial vehicles”. She adds that improvements to the grid need to support larger vehicles, especially in charging lot layouts. Larger battery capacities imply the need for faster and higher-capacity chargers.

She predicts that, in less than a decade, zero-emissions vehicles will look more normal in the commercial space as they already do in the passenger car industry. “We will move beyond early adopters and regulatory-driven purchases to mainstream desire for these products,” Shust says.

In Shust’s view, autonomous technologies will continue to evolve as well, introducing an array of radar, cameras and sensors to further boost sustainability and efficiency. “Connected capabilities will continue to expand,” she says, “providing more in-depth insights and monitoring of vehicle operations and maintenance needs.”