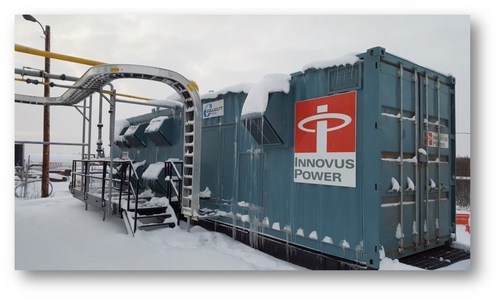 The northern community’s 300+ households are now being powered with Innovus’ 590kW converter-based VSG platform, which is expected to save around 80,000 litres of fuel per year. The technology is integrated with the existing 52kW solar PV system.

“With the launch of NTPC’s Aklavik project, we are witnessing the beginning of a revolution in smart power generation,” said Marc Hoffman, Innovus’ CEO and president. “Our technology brings proven efficiency, resiliency and dispatchability and we look forward to playing an important role in achieving climate change goals in remote communities across Canada and the U.S.”

Innovus says that at low engine speeds, the VSG platform provides low-load operation while achieving up to 40% higher efficiency. The platform also allows renewable penetration up to 90% without the added cost of storage normally required for grid stabilization.

At the core of the VSG is its proprietary-embedded software control system, configured to incorporate a range of engines, fuels and energy technologies.

According to a 2017 study by the Waterloo Institute for Sustainable Energy (WISE), which independently evaluated Innovus’ technology, pairing Innovus with renewable energy sources reduces fuel consumption by 53-83%.