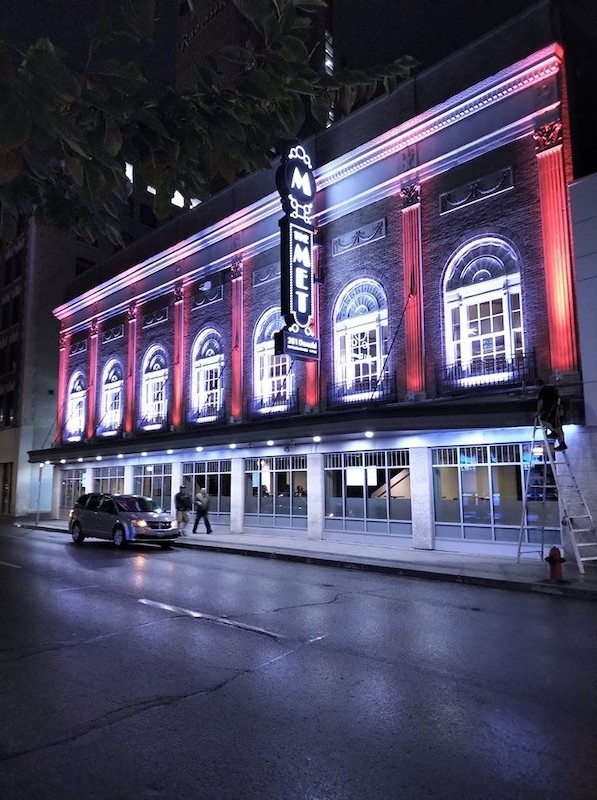 Lighting up the Met
The Met was designed by architect C. Howard Crane, built in 1919 and opened in 1920 as a movie theatre. After closing in 1987, it was restored by Canad Inns and reopened in 2012—but while its interior was once again opulent, plans for exterior lighting stalled.

Only with the heightened excitement of the Jets’ playoff games was sufficient interest generated in hosting fan events at The Met and, in turn, in updating its outdoor illumination. According to Economic Development Winnipeg, 120,500 fans attended nine street parties over six weeks. Christie Lites Sales spotted an opportunity to better show off the façade as it became a backdrop for national TV coverage with commentator Don Cherry.

“Our existing exterior lighting fixtures were out of date,” says Vance Masters, Jr., Canad Inns’ director of entertainment technologies. “They were not projecting enough to wash our building and there was not enough focus to show the true heritage of The Met’s architecture.”

Masters worked with Gary Sywake, Winnipeg sales and integration representative for Christie Lites, which by that point had supplied temporary street lighting for the street parties.

“Our task was to bring back a vibrant look representative of the movie-palace era by highlighting the front and top portion of the architecture,” Sywake explains, “to help position the Met as a showpiece for events and hockey games.”

The design and specification phase started in April 2018. To illuminate the architecture as desired, the fixtures had to provide precise beam angles, at least 400 lumens per foot and changeable colours—and this being Winnipeg, of course, they had to be able to perform at very low temperatures.

The 35-W floodlight reportedly provides more than 1,400 lumens, can be wirelessly controlled and operates at temperatures as low as -40 C. The linear fixture reportedly consumes 9 W per foot and delivers nearly 420 lumens per foot.

Once these specifications were complete, Mark Ectovich, president of Rite Lites in Saint-Laurent, Que., came on board to review the design and scope of the project. His company was able to offer local representation for technical support and service.

“The system enables the Met to quickly switch colours to reflect holidays and other special events, without jeopardizing the historic beauty of the building,” says Sywake.

“We have received a lot of fanfare and positive comments,” adds Masters. “Now we are ready for another playoff run from the Jets!”

From gaudy to gorgeous
The capabilities of the Acclaim Lighting products specified for the Met are becoming more and more common with the increasing trend of urban façade illumination, which often ties in with seasonal themes and events.

Also fuelling the trend is affordability. Now that almost every lighting application can be handled with LEDs, dynamic effects are feasible even with moderate budgets.

“There is no need to relamp or service the ballasts as frequently as in the old days,” says Brooks. “Luminaire maintenance is hardly required when LEDs can last thousands of hours.”
For the electrical contractors who install and service such projects, the long-term value can come instead from selling ‘lighting as a service.’

“You can manage your customer’s lighting for them over time just as you would with a maintenance contract,” Brooks says. “In many cases, the client wants dynamic illumination programming without having to touch it themselves. So, there is an opportunity for you to update the programming over time. The technology can let you store and ‘dial up’ the exact colour or colour temperature you want, whenever you want it.”

LEDs for landscapes
Beyond historic properties, public art projects and downtown cores, one of the areas with the most untapped potential for new outdoor lighting is the residential landscape market. Not only has the affordability of the technology brought it within reach for many homeowners, but the cold-weather performance of LEDs also makes them particularly well-suited for Canadian yards.

“LEDs love the cold,” says Todd Goers, national sales manager for WAC Lighting, who visited Winnipeg in February to speak at Grow 19, the Manitoba Nursery Landscape Association’s (MBNLA’s) industry conference. “Everything that used to be done with halogen lighting can now find an equivalent solution in LEDs. You can even retrofit halogen fixtures with LEDs and save 75% in energy.”

WAC Lighting, however, specializes in integrated—rather than ‘drop-in’—landscape lighting products.

“That way, we manufacture the fixtures, have full control over the system and can provide a long-term warranty,” Goers explains. “An integrated product offers better thermal management to survive a huge range of temperatures. Where a drop-in might have to be replaced after a few years, an integrated solution will require a lot less maintenance.”

Another important value-add is adjustability, which now means one type of fixture can replace a multitude of older ones, making it easier for contractors to source inventory to meet their customers’ specific needs.

“A lot of people aren’t really aware of such features,” says Goers. “One fixture can now offer different brightness levels, beam angles and even colour temperatures.”

Of course, there are still local factors to keep in mind. Homes near the ocean, for example need brass fixtures, not aluminum, to thrive in the salt air.

“Local electrical contractors really have an opportunity to pitch systems to new customers,” Goers says. “Too many homeowners don’t do enough due diligence. You need to set yourself apart from your competition through proficiency and craftsmanship.”

Indeed, there are many benefits of landscape lighting, from home beautification to nighttime safety. One of the lesser-known advantages of LEDs is they do not emit any ultraviolet (UV) light, so they do not attract mosquitoes or other insects.

“So, in addition to less maintenance, there are no dead bugs on the glass to clean up!” says Goers.

Finally, there is the potential of connected lighting. While still more novelty than practicality for the residential market at this point, one could easily foresee homeowners adjusting their backyard lighting with a tap of a smartphone screen.

With files from Acclaim Lighting, Traxon Technologies and WAC Lighting.

This article originally appeared in the April 2019 issue of Electrical Business magazine.