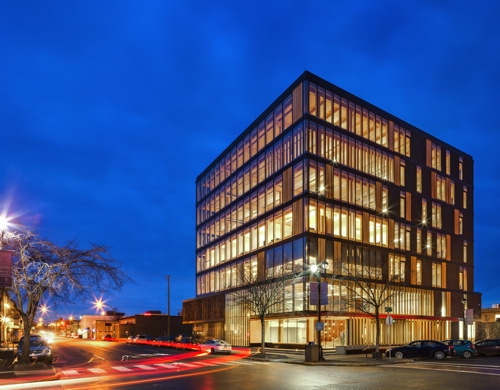 The LEED Gold-certified Wood Innovation & Design Centre at University of Northern British Columbia is the tallest cross-laminated timber building in North America. Naturally, owing to concerns over the combustibility of timber structures, the building has lightning protection (which can see at the skyline). Photo by Ema Peter, courtesy MGA

September 9, 2016 – Also known as lightning rods, conventional air terminals are remarkably simple in design… they are just electrically conductive metal rods as few as 10-in. tall with diameters as slender as 3/8 in.

Non-conventional air terminals compete in the marketplace with conventional rods; they are equipped with design elements that manufacturers claim improve their performance in the field.

Unfortunately, the considered opinion of almost all independent scientists and public safety authorities is that lightning protection systems (LPS) using non-standard products do not provide the advantages claimed. University of Florida lightning researchers, Uman and Rakov, for example, find

the suggested advantages of non-conventional methods over the conventional techniques are not supported by the available experimental data or by theory.

This article provides brief overviews of both conventional and non-standard systems, and summarizes real-world performance so you can be the judge.

Conventional LPSs have an exceptionally high level of reliability and performance. For example, Ontario’s Office of the Fire Marshal documented 11,000 lightning-related building fires from 1924 through 1938, and reported

In no case has a building rodded under the Lightning Rod Act been destroyed by lightning after having been inspected by the Fire Marshal’s Office.

An LPS using conventional air terminals creates a continuous, low-resistance network of pathways through which lightning can flow from the top of a structure into ground without causing damage to the building, its contents and occupants. Such a system consists of air terminals strategically located at high points on the building and connected through multiple conductors to ground electrodes.

These components are listed under UL 96 “Standard for Lightning Protection Components” and are sized to handle lightning surges that can be as powerful as 3 million volts. The LPS must be bonded to other building systems and metallic building components to create equipotential conditions that prevent arcing and side flashes. In addition, service entries into a building are typically equipped with surge protective devices.

A lightning strike occurs when static electric charges in the atmosphere and earth attract each other sufficiently to create a spark that jumps across space to connect each to the other. The striking distance across which the spark can form is key to determining the effective spacing of air terminals. Based on historical evidence, field trials and theoretical calculations, North American standards assume a 150-ft striking distance is 99% effective.

Engineers model this by visualizing a sphere with that 150-ft. radius being rolled over the exterior of a structure. Anywhere the sphere touches the structure is a point at which lightning can strike the building. Air terminals are installed above at-risk surfaces to intercept strikes and conduct the lightning safely into the ground. Creating this zone of protection generally means air terminals are required at high points and corners of roofs, 20-ft on-centre around the roof perimeter, distributed across the field of the roof, and on top of roof-mounted equipment.

Early streamer emission (ESE) air terminals have proprietary configurations or contain electrical charging capacitors. These so-called enhancements are advertised as providing a larger zone of protection than that of conventional air terminals and permitting the use of fewer air terminals, bonds, and grounds. The manufacturers claim that a single mast-mounted ESE device can protect even large buildings and open areas.

Manufacturers of ESE air terminals extrapolate data from laboratory tests to natural lightning, but static electric discharges made with manmade apparatuses do not scale to actual lightning strikes that can travel many miles before striking a building. Lab tests also fail to account for surrounding objects, weather and other external conditions.

Moreover, the research supporting ESE claims was published in journals that are outside the lightning protection field; its validity has been challenged by Canadian scientist Abdul Mousa and other researchers with bona fide expertise in atmospheric physics and the lightning attachment process.
Incontestable evidence proves lightning strikes have occurred well within the zone of protection claimed by ESE advocates. When, for example, conventional air terminals and ESE devices were both installed at a mountaintop research facility operated by the New Mexico Institute of Mining and Technology, all the lightning strikes attached to the conventional air terminals and none to the ESEs, proving the ESEs do not have an enhanced protective range.

In 2005, a U.S. District Court ordered ESE device manufacturers to stop making false advertising claims about the radii of protection provided by their products. The Court found unrefuted evidence that

Unfortunately, ESE air terminal manufacturers remain undaunted. One of their marketing tactics is to rebrand their products to stay ahead of competitors that do not make exaggerated claims. ESE devices were once sold as “radioactive air terminals” with the claim that radioactivity enhanced effectiveness.
When government agencies banned the radioactive components, the products were rebranded as ESE air terminals, but the performance claims were not adjusted to compensate for the loss of the radioactive agent. One company now promotes a “collection volume method” for the placement of its devices. New name, but the lack of results appears to be the same.

Adding to the confusion, ESE devices are now included in French and Spanish standards that are premised upon evidence that has been repeatedly rejected by the NFPA and other standards-development organizations (SDOs).

The LEED Gold-certified Wood Innovation & Design Centre at University of Northern British Columbia is the tallest cross-laminated timber building in North America. Naturally, owing to concerns over the combustibility of timber structures, the building has lightning protection (which can see at the skyline).

Another non-standard product is the charge transfer system (CTS). A patent [US 5043527 A] for one of these proprietary devices says CTSs

This is followed by the inventor’s confident claim these systems “provide up to 100% prevention protection from lightning [strikes]”. Instead of providing a path to safely conduct lightning into the ground, CTSs are purported to prevent lightning from even occurring in the vicinity of a structure equipped with one.

CTS products are also called lightning eliminators and dissipation array systems. They are fabricated with a large number of small metal points; some look like umbrellas wrapped with barbed wire and others like a dandelion or sea urchin with fine wires radiating from a hub. The metal points are said to leak ions from the earth into the atmosphere, thereby creating a corona that inhibits lightning.

The corona effect can be demonstrated in a lab but does not protect structures from forces acting under actual meteorological conditions. Nigerian researchers, Ette and Utah, for example, report palm trees are vulnerable to lightning despite having a corona similar to that of a CTS. As one lightning protection professional says

after travelling for miles looking for a place to attach to ground, lightning isn’t going to let a few metres of corona get in its way.

The Federal Aviation Administration (FAA), Kennedy Space Center, the U.S. Air Force and other authoritative sources have documented the failure of CTSs. Studies comparing similar buildings with and without CTS devices have found no significant difference in the frequency of lightning strikes.

Scientific and technical progress requires rigour to challenge long-assumed theories and beliefs. The lightning protection community has been ready to embrace findings emerging from new research techniques, such as rocket-triggered lightning strikes that enable LPS system testing with real lightning, and new techniques for monitoring lightning strikes with increased precision.

Benjamin Franklin—recognized as the progenitor of lightning protection—claimed tapered lightning rods are the most effective, and his theory held fast for two centuries. When tested with modern experimental techniques, however, researchers determined blunt-tipped air terminals were as good, or better, than pointed ones. The research was vetted by other scientists, analyzed in light of contemporary physics, tested under actual lightning conditions, and incorporated into internationally recognized codes and standards.

The same open-minded approach has been given to claims about ESE and CTS air terminals, but instead of embracing these alternative products, the overwhelming consensus of the worldwide scientific community and SDOs is

the characteristics of special air terminals are not superior to a simple rod for lightning… (Lee, et al).

Despite rejection by the scientific community and SDOs, non-conventional device producers continue to aggressively market their wares. The catchphrase caveat emptor—let the buyer beware—pertains to this market situation perfectly. If something sounds too good to be true, it probably is.

• NFPA 780 “Standard for the Installation of Lightning Protection Systems”.

Photos 2 & 3: The owner of this hotel expected a single early streamer emission (ESE) device rising above the penthouse to protect the entire building. It did not. A lightning strike hurled concrete roof tiles nine storeys to the ground. Luckily, no one was injured.
Courtesy East Coast Lightning Equipment Inc.

Photo 4: To model where air terminals are required, a 150-ft radius sphere is rolled over a building’s exterior. Points where the sphere touches the building(shown in red) are vulnerable to lightning strikes and need protection.
Courtesy lightningsafetyalliance.org.

Photo 5: Researchers at New Mexico Institute of Mining & Technology installed this charge transfer system (CTS) on a mountaintop and monitored its performance under actual lightning conditions. The device was struck by lightning, disproving the claim that CTSs prevent lightning strikes.
Courtesy Langmuir Laboratory for Atmospheric Research.