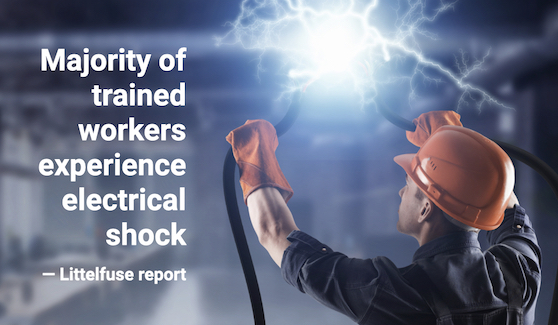 July 22, 2020 – The results of a survey recently conducted by Littelfuse Inc. show that most personnel who work directly with electricity have experienced electrical shock while on the job, half of which by more than 220 volts.

The survey asked almost 600 people who work directly with electricity questions about their knowledge of, experience with, and attitude toward electrical shock hazards. The results were then analyzed to help the industry gain an understanding of why worker injuries and fatalities occur each year from shock.

“The survey results indicate that even the most-trained employees—those who work directly with electricity—believe it is safe to work on or near equipment up to 500 volts, when in fact it’s not,” said Peter Kim, vice-president and general manager, Littelfuse Industrial Business Unit. “Too many fatalities occur each year due to electrical shock. Companies need to understand that human-based safety methods are not the most effective measures. Incident prevention requires more than PPE and safety training.”

A full report discussing the survey findings is available. Among those findings:

• 62% of those who said they consider up to 500V to be a safe working voltage reported having experienced electrical shock by more than 220V while on the job.

• 86% of those who said they have experienced electrical shock by more than 220V also rated themselves as either “Very Confident” or “Extremely Confident” in their ability to recognize an electrical hazard.

This report also provides an in-depth discussion of:

• Variables that impact the severity of an electrical shock injury, and the long-term injuries of the body.

• Safety by design and special-purpose GFCIs.

Littelfuse is a global player in circuit protection, power control and sensing.