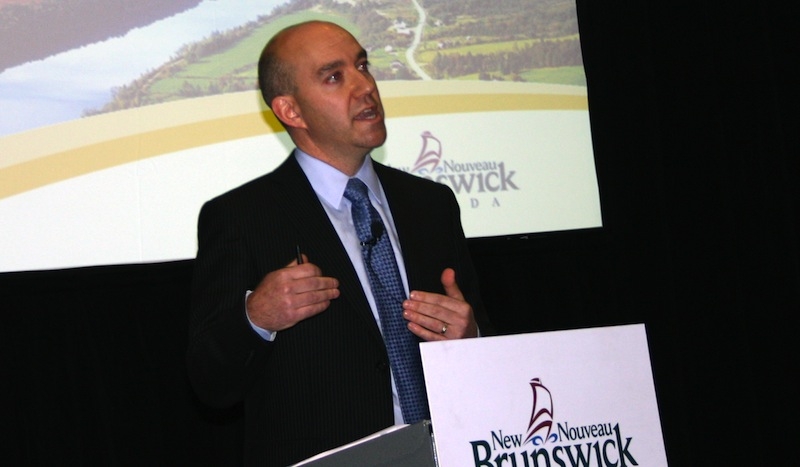 October 19, 2011 – Today, the Government of New Brunswick released the Energy Blueprint, which outlines a 10-year vision and 3-year action plan for the province’s energy sector. It was unveiled by energy minister Craig Leonard (in photo), and it serves as the government’s response to the final report of the New Brunswick Energy Commission (released back in May).

The blueprint outlines five key objectives that summarized the views of those who participated in the commission’s public engagement process:

These objectives are intended to serve as the foundation of a new vision for the provincial energy sector.

The commission’s 67 recommendations are integrated into a list of 20 action items the province intends to pursue during the next three years. Significant items included in the action plan include:

• The amalgamation of the NB Power group of companies into a single, vertically integrated Crown utility.
• A review of the natural gas distribution model to achieve lower rates.
• Subjecting all NB Power operations and rate changes to a strengthened and more transparent regulatory oversight system.
• The establishment of an office of the public energy advocate.
• An increased commitment to renewable energy sources.
• A new focus on energy efficiency and better managing energy demand.

“NB Power is an extremely valuable asset and will remain a Crown corporation owned by the provincial government,” said Leonard. “We are directing the utility to pursue an aggressive agenda that will see NB Power as a lower-cost, more efficient organization that is paying down debt and building equity but, most importantly, protecting New Brunswick families and businesses by keeping rates competitive and stable for the next decade.”

New Brunswickers have the lowest electricity rates in Atlantic Canada, says the province, and customers are benefiting from a three-year rate freeze. Still, the action plan recognizes the need for competitive electricity costs for large industrial users, so the provincial government will introduce the new Large Industrial Renewable Energy Purchase Program. This will effectively match Canadian average electricity costs for qualifying large industrial customers and provide incentives for New Brunswick companies to build their own renewable generation.

NB Power is also being mandated to pursue a significant increase in renewable generation. While New Brunswick obtains 28% of its in-province electricity demand from wind, biomass, hydro and other renewable sources, the provincial government will increase its commitment to renewable energy by ensuring that this amount is increased to a minimum of 40% by 2020.

By 2020, New Brunswick aims to procure at least 75% of its electricity from more stable-priced, clean, renewable or emission-free sources, including nuclear energy from the refurbished Point Lepreau generating station.

“More efficient use of energy is generally less expensive than building or buying new supply to meet future energy demands,” said Leonard. “Our success in reducing demand from existing sources will reduce future expenditures on new generation and help to ensure the affordability of energy for families and the competitiveness of our industry, while protecting the environment.”