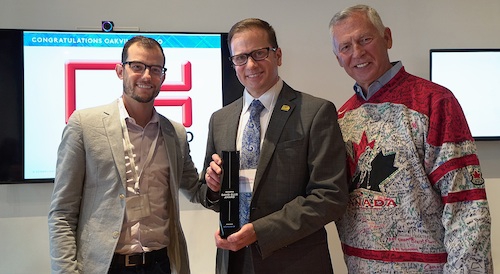 In memory of David Ellis, whose life was cut short at age 18 due to a preventable workplace accident, the award is granted to a Canadian company that has demonstrated the “utmost excellence” in workplace safety.

“As an organization that believes in empowering all of our staff, we are honoured to be the first recipient of such an important award,” said Rob Lister, president and CEO of Oakville Hydro. “The Davis Ellis award is particularly significant because it brings awareness and inspiration to the never-ending challenge of identifying and eliminating workplace hazards before anyone gets hurt.”

Just over a year after making a commitment to improving safety performance and rolling out eCompliance, the corporation says it has seen an increase in the number of safety activities performed across the company. Onsite employees are identifying and eliminating more hazards by performing more inspections and creating more corrective actions than they were previously, Oakville Hydro notes.

“Had my son, David, had the proper training, supervision or worked at a company where he was encouraged to speak up about unsafe worker conditions, he would still be here today,” said Rob Ellis, founder of MySafeWork and Jersey of Courage. “Our goal is to inspire companies to achieve greatness in safety culture. We want to see more companies respecting and protecting their workers like Oakville Hydro does.”

“Worker participation has been shown time and time again to be a leading preventative agent in reducing workplace accidents,” says Josh LeBrun, president and COO, eCompliance. “Companies like Oakville Hydro have given their employees the tools for success and have created an environment where workers are encouraged to participate in and contribute to the safety program.”