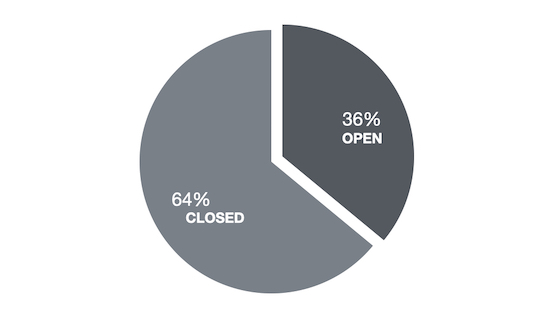 May 21, 2020 – The share of businesses that are fully open has begun to rise across Canada, as provinces restart their economies, according to the Canadian Federation of Independent Business (CFIB).

According to its latest survey, about 1/3 of businesses are now fully open—up from 21% a month ago. Alberta, Manitoba and New Brunswick now have the greatest number of small firms fully open, while Nova Scotia, Ontario and Newfoundland & Labrador are the least open economies.

(CFIB did not release any data on Canada’s territories.)

“While it is good news that more firms are beginning to open across the country […] there is a lot of uncertainty for businesses in the months to come, including how to recall laid-off workers, what new measures they should put in place to protect their staff and customers, and if reopening will even be financially possible if their sales are too low,” said CFIB president Dan Kelly.

• The top reasons for not fully opening are government-mandated closures (49%), sales too low to make it worthwhile (36%) and concerns over the health & safety of staff and customers (35%).

• 26% of small firms are concerned they may be forced to close their doors permanently.