His journey from working the line to president and CEO, and his favourite jobs along the way 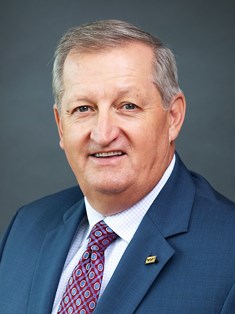 Rene Gatien, president and CEO of Waterloo North Hydro, is not the type of leader to direct from an ivory tower. In fact, Gatien got his start in the electrical industry as a line apprentice with PowerTel Utilities Contractors Limited (PowerTel) in 1975, a family business, after his first year in engineering school.

During his six years spent on the line, Gatien finished his engineering degree and, after graduating, earned a position at Brampton Hydro Electric Commission. When his father retired, Gatien moved back to PowerTel, this time as VP of operations, but the job took him away from home too frequently. From there, he went to Guelph Hydro Electric Systems Inc., where he happily spent the next 11 years as vice president of operations. When Gatien was offered the position of president and CEO at Waterloo North Hydro, he decided to take the leap. And what a leap it has been, as he has spent nearly two decades in the role.

I spoke with Gatien about his journey from working the line to president and CEO, his most cherished position in his career, and his advice for those entering the industry.

Q: What did you like about the industry when you first joined?

I really enjoyed the aspect of building things as a line person. It was quite challenging. We were always seeing new things, and there was a great sense of accomplishment. It was quite interesting and enjoyable to build stuff that brought energy to communities or to new businesses in the province.

Also, to me, the utility industry was a lot like a collegial atmosphere; there was lots of sharing of information. In the utility business, it was about working together for the good of the customers of Ontario, and I liked that.

Q: What were your favourite and least-favourite roles over the course of your career?

I think I enjoyed them all, for different reasons. I had a hard time leaving any of the places I’ve worked. My least favorite was when I was travelling for PowerTel. I enjoyed the business itself, but I travelled a lot and didn’t get to see my family a lot, and that’s eventually what won out.

Q: Can you describe the day-to-day duties of the president and CEO of Waterloo North Hydro?

I say to folks, I’m supposed to hire the right people, provide them with a good vision of where I think we need to go, make sure they’ve got the tools, knowledge and opportunity to use the talent and skills they have, and then get out of their way and be a coach.

Day-to-day, I spend a good chunk of my time looking after the board of directors by keeping them informed and getting documents and reports organized for board meetings. I work with our three shareholders to keep them up-to-date, find out how to solve any issues they have and communicate regularly with them so there are no surprises on either side.

Beyond that, I’m keeping up with my four vice presidents to see that they’re getting things done in terms of their budgets, help them with people issues, provide a little bit of coaching and talk about where we’re heading in the future.

I’m also quite an external representative. I work with the shareholders and the community around us, as well as with some of the groups that we have formed.

Q: How do you feel the industry has changed since you joined it?

It has changed tremendously! There have been some great advancements in technology, for example. The equipment, the computer systems, the amount of knowledge and data that we have now is phenomenal. The changes in systems and outage management systems is quite tremendous.

Also, I believe that all the utilities in the province used to work together to serve all customers. Now, there are a number of utilities that don’t willingly share information. During power outages, we all work really hard together and it seems to level the playing field, but in between that, I find we probably don’t share as much information as we used to when we weren’t in the marketplace we’re in now. I think it’s because we’re running quite hard to keep up with all the regulatory construct and rules that we’re under. Also, this is just my opinion, but I believe that there are some utilities that are more competitive and want to get as much benefit out of their ideas as they can before they pass them on to others. So, while they may get to others eventually, it takes time to get there.

Q: What are some other things that you’d like to see more of or change in the industry?

I’d like to see better value to the customers. For the regulation that we have, I think it sometimes doesn’t translate directly into either better service, better infrastructure or lower rates for the customer in a meaningful way.

I believe that the way the government is looking at trying to reduce costs is through consolidation and I’d sure like to see that changed. I’d like to see the government look at the entire power bill from top to bottom and realize that the biggest piece of the power bill is the energy bill. The biggest headache to customers is global adjustment. That whole piece is the biggest problem in the province, but they keep going after the utilities. I think the utilities should continue to do what they can to be more efficient, but for customers, the bigger thing would be solving the problem pf the price of energy and the lack of a true electricity market in the province.

Q: Do you have any advice you want to give to anyone entering the industry?

I never worried about my title or position, I worried about doing a really good job. I wanted to make sure that whatever work I was doing, that I did those things well, and that I proved how good I was, as opposed to asking for a promotion before showing how good I was. Generally, opportunities and promotions came along. I think the other thing is, make sure you establish meaningful relationships in the industry that you’re going to keep for a long time. I still deal with people that I have run into over the last 30 or 40 years that I can call up if I need help with a problem. They have been important in getting me to where I am, there’s no two ways about it.

Q: Is there anything else that you’d like Electrical Business readers to know?

I’ve taken a path of lifelong learning. I’m nearing the end of my career and I still feel that I don’t know enough. I think I was probably in my 50s when I did my MBA, because I wanted to learn about business. I’ve done my ICD to learn the proper way of running a board. I’m going through a course right now with all of my frontline people, and I’m enjoying it because it’s reminding me of things that I learned long ago and may have forgotten. I think that’s a big key; lifelong learning has helped me my entire career.

This article originally appeared in the February 2020 issue of Electrical Business.