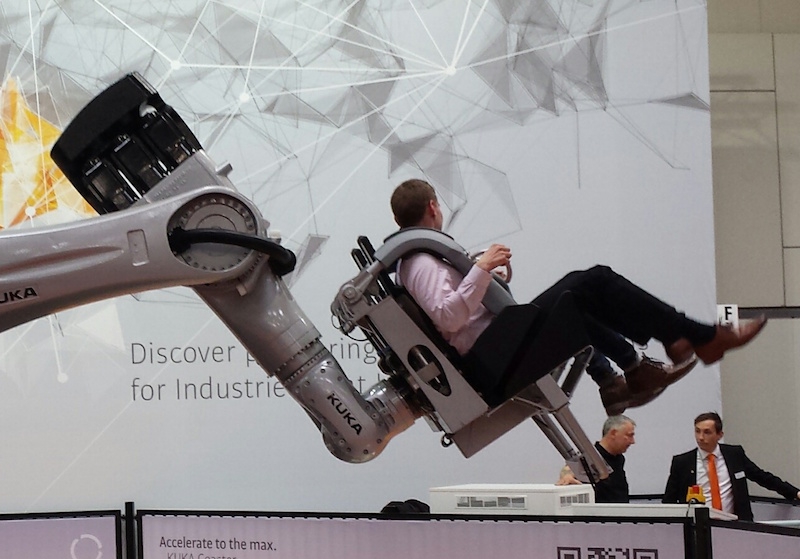 May 25, 2016 – This year’s Hannover Fair (Hannover Messe) industrial tradeshow proved that tradeshows are not at all dead, as over 190,000 visitors from all over the world tried to get a grasp of the latest technologies presented by 5200 exhibitors.

Over 5000 visitors came from the U.S. alone, but they were surpassed by the 6000-strong Chinese delegation attending the show. The booth of automation giant Siemens had a footprint of 42,000 sf… and that’s just one booth! And since 42,000 sf didn’t seem like enough, Siemens added a hospitality floor for engaging customers.

This year, the U.S.A. was the “partner country” of the tradeshow, so President Barack Obama himself visited several booths alongside German Chancellor Angela Merkel. Besides chatting with personnel at the booths of Rittal, Weidmuller and Siemens, the two also stopped by the Phoenix Contact booth to have a look “Back to the future”, where a time machine car was displayed to showcase the high-speed charging device that has been developed for electric vehicles.

At the IFM Electronic booth, they experienced the world’s smallest and most powerful 3-D camera, which will be built into cell phones in the near future (thanks to cooperation with Google).

The main focus of Hannover was Industry 4.0—the fourth industrial revolution. This movement has existed for over five years, but no other trade fair has ever featured so many real-world applications with smart technology for the world of manufacturing, thus making Industry 4.0 a tangible experience.

To draw people to their booths, several companies introduced Industry 4.0 through games and sport. At Pilz, a player in safety automation technology, the audience could play a foosball game (see photo) against a robot team. The robot usually won. The same happened at the Lapp booth, where a robot easily won basketball competitions against human challengers. At sensor company Pepperl & Fuchs, visitors raced against the machine with model cars. Omron, meantime, asked attendees to challenge their ping pong machine, while KUKA invited the adventurous to have a seat in their roller coaster robot (see photo).

The solutions on display at the fair ranged from retrofits of individual machines right up to full production-line integration, complete with data capture and analysis in the cloud.

“This marks the breakthrough for Industry 4.0,” said Dr. Jochen Köckler, member of the managing board of Hannover Fair. “Next on the agenda is the commercialization phase. The technology is ready to roll and about to make its way onto the factory floor.”

Industry 4.0 will lead to significant changes in manufacturing facilities. In the future, there will be data collection at numerous locations—from the work bench to maintenance, from production to packaging, and from warehouse to the sales department. Most importantly, a machine of the future will ‘know’ when and specifically where it will need maintenance.

This capacity for predictive maintenance will lead to significant productivity improvement. An important part of this is condition monitoring, which is the ongoing collection of data around a machine (e.g. temperature, position, oscillations) that will also help prevent unexpected downtime of equipment.

All of this is part of the ‘smart factory’: intelligent machines and products that communicate seamlessly without humans or personal computers. The basis for the smart factory is the networking of all relevant production data; not only on the plant floor, but also in the outside world. Machines know when they need parts to produce, and will order those parts from an outside supplier to receive them just in time.

Canadian manufacturers are still several years away from this scenario, but the time is now to start looking for parts and products that can accommodate the smart factory of the future. Canada’s productivity has been falling in recent years as compared to the U.S. and other G7 countries, and will fall behind further if our manufacturing facilities do not upgrade to Industry 4.0 standards.

— Andreas Sobotta is a senior business development leader in sales & marketing management, having worked with companies such as Siemens, Phoenix Contact, Festo and Davis Controls. Photos by author.