Features Articles
The job that David Bowers will never forget 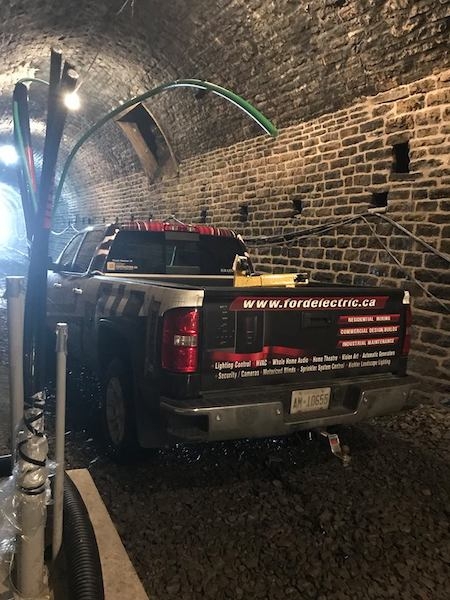 Installing the wires for another kiosk Courtesy Ford Electric

One of last year’s winners really stood out for its uniqueness: the Brockville Railway Tunnel. Ford Electric worked with Northern Cables Inc., Nedco Ontario and Philips Lighting Canada to re-purpose the Heritage Railway in Brockville, Ont., for the benefit of recreation, tourism and economic development.

The project was so innovative and eye-catching that we wanted to find out more about the design and installation process from the lead designer, David Bouwers, CEO of Ford Electric in Brockville.

David Laseur, a member of the Brockville Tunnel Committee, introduced Bouwers to the project. He asked Bouwers to visit the tunnel to see whether he had ideas that would make the tunnel a year-round attraction, rather than a one-time event (Canada’s 150th).

In May 2016, Bouwers visited the tunnel “in all of its cold, wet and damp glory”. Months later, when he proposed Ford Electric’s design and installation to the committee, he had no idea the city had already decided on a plan.

They were “going to tender a job which included running plain LED lighting along the ceiling of the tunnel with piping for security and emergency lighting taking up most of the ceiling,” Bouwers explains.

But after he presented his proposal to the committee, everything changed. “One member in the room literally picked up the original plain plan for lighting and tossed it on the ground,” he says. “That was the first notion I had that they were impressed with Ford Electric’s design and package.”

So what did Bouwers’ shocking proposal include?

Maintaining the beauty of the tunnel

His proposal covered a number of elements, most important of which was the safety and quality of the lighting fixtures.

“There was almost 16 inches of water travelling through the tunnel all the time, so the moisture coming off the walls would be a huge issue for any type of fixture that you try to put in there,” he explains.

“I knew whatever I chose had to be able to stand up to the rigours of the very wet environment… and stand up to abuse by the public,” he continues.

Additionally, he wanted to install the fixtures and infrastructure in a way that wouldn’t cover the tunnel’s ceiling, which would “ruin the whole façade”.

“The whole beauty of the tunnel is the different types of stone and the blasted section of the tunnel. It’s just amazing, and you don’t want to cover that up with infrastructure,” he elaborates.

To address this issue, he came up with the idea of adding clear stones to the base of the tunnel and installing piping underground.The clear stone was later designed and planned by Eastern Engineering. Additionally, he planned to install a concrete walk- way and curb structure to hide the piping and allow the water coming off the tunnel walls to flow into the clear stone.

Bouwers’ proposal also addressed the challenge of power source stability. With such a small space and only two exits, he planned to implement a power house and generation system at the north entrance to protect against power outages.

Additionally, he had to overcome the issue of voltage drop, explaining “we’re not allowed to have more than a 2% voltage drop over a line”. That’s where the idea of ‘kiosks’ came in: 13 stainless steel housing structures for the transformers for the lighting system.

“We brought higher voltage to each kiosk because, when you run at 600V, you don’t have nearly the amount of voltage drop, and then we dropped the voltage down for each kiosk,” he continues. “So each kiosk holds two enablers and 28 fixtures, each going both ways, north and south.”

But in such a constricted area, space has to be used efficiently. So the kiosks were built to serve multiple purposes. Every other kiosk has a panic button to ensure public safety, and they provide Wi-Fi, access points and cell boosters throughout the tunnel.

“We also wanted to have audio, not only for music in the tunnel, but also to work with the lighting and to be able to add public announcements if we needed to,” Bouwers says.

“I wanted the tunnel to be well-lit but also have an exciting light show happening without sacrificing safety to the general public,” he explains. The kiosks facilitated just that.

After his proposal was accepted, choosing the right partners to work with was paramount.

In choosing the lighting fixtures, Bouwers searched for manufacturers who could provide the type of linear RGBW fixtures he had in mind, and would work with the rigours of the tunnel.

“I was looking for IP66-rated fixtures; I was looking for a company with high quality and good warranty because there’s a lot of things going on in the tunnel. We have water, mineral deposits, families walking through there… I wanted a fixture that I knew was going to be safe for the public.”

Before the work could begin, the project had to be quoted.

“Quoting this job was very difficult — not only for the harsh environment, but also co-ordinating such a large project from only two entrances,” Bouwers says. “The planning of gravel slingers, concrete trucks, piping, drainage lines—all within such a confined space—was a battle in itself.”

During the installation, Bouwers says, four to six people from Ford Electric were working in the tunnel every day.

“This was a project [where] we were basically the general contractor; I was the designer and I was also there every day,” he shares.

Like any project, there were challenges during the installation. In fact, Bouwers and his team faced a challenge before they even began work.

Stone masons needed to do a year’s worth of repairs on the tunnel itself, and they were a month and a half behind schedule, he explains.

Ford Electric and their partners were supposed to begin work at the end of January 2017. Instead, they began in March. On top of that, they faced a tight deadline since the city already had a specific deadline, with a proposed opening date of August 12, 2017.

“So we had to organize not only the planning for the infrastructure and the gravel, but we also organized the concrete and all the other work that was happening inside the tunnel at the same time to make sure that everyone stayed to that schedule.”

Bringing the gravel and concrete into such a small space meant they had to work around the trucks and other workers to install lights, curbs and piping.

“It was probably the biggest challenge I’ve ever faced, but it was also the most exciting one too,” Bouwers says. “I mean, how often are you going to work on a 160-year-old tunnel?”

You might wonder how Bouwers came up with the idea of a light and audio show in a re-purposed railway tunnel.

His experience in home automation played a key role, but another experience also influenced his thinking:

“I’m one of those crazy Christmas light show guys that have lights to music, and it’s something that we’ve been doing for the community for years at our office and house,” he says, laughing. “I think that’s maybe why the tunnel committee had come forward to me.”

Bouwers says Ford Electric began doing home and office automation about 20 years ago; they work with these products every day, so their expertise aligned well with the idea of incorporating lighting and audio in the tunnel.

“Since that job, we’re already working on some other projects coming up,” he says. “We’re now what they call a ‘value-added partner’ for Philips, and we got special training for that as well. Our background with home automation, audio and video distribution has helped along the way with that, too.”

“A job that I’ll never forget”

Despite the challenges involved in such a unique job, Bouwers’ final takeaways are overwhelmingly positive.

Bouwers’ family has been involved in Ford Electric since the 1950s. He grew up hearing his father and uncle (who took over the business from Charlie Ford) share stories about their favourite jobs.

“I knew, even before we started, that this was going to be the job that I’ll never forget,” he says.

Since opening the tunnel, Ford Electric has designed different light and audio shows for events and holidays, such as Remembrance Day.

“The response from the community has been fantastic,” Bouwers concludes. “When you hear stories from people coming on a European trip to Canada and they had on their agenda to come to the Brockville Tunnel… it’s amazing.”

This article originally appeared in the July/August 2018 issue of Electrical Business Magazine.