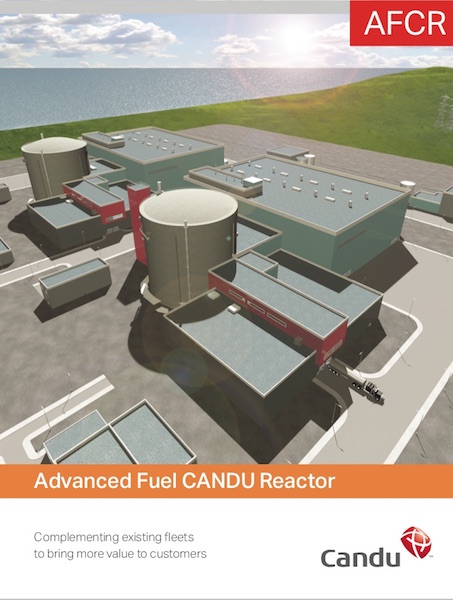 November 10, 2014 – Candu Energy—a member of the SNC-Lavalin Group—welcomed the November 8 signing of a Memorandum of Understanding (MoU) between Natural Resources Canada (NRCan) and the China National Energy Administration to advance collaboration between the two countries in the field of civilian nuclear energy, including the development of advanced fuel reactors and exports to third markets.

The same day, Candu Energy signed a framework joint venture (JV) agreement with China National Nuclear Corp. (CNNC) to build Advanced Fuel CANDU Reactor (AFCR) projects in China, and develop global opportunities for it (see brochure, below). This follows a positive recommendation from a Chinese Expert Panel Review on AFCR technology that concluded the proper time should be chosen to “initiate the construction of AFCR to unlock and utilize its various advantages”.

“Taken together, the MoU, framework JV and positive recommendation by a Chinese expert panel represents a new level of cooperation between Canada and China in the next wave of nuclear energy innovation,” said Preston Swafford, president & CEO, Candu Energy. “We look forward to working closely with CNNC in the development and pursuit of nuclear power generation projects in China and abroad using the new AFCR technology.”

Candu Energy’s AFCR is a 700MW Class Generation III reactor based on the CANDU 6 and Enhanced CANDU 6 (EC6) reactors with a number of adaptations to meet Canadian and international standards. Its fuel flexibility allows it to use recycled uranium or thorium as fuel. It has a heavy-water moderator and heavy-water coolant in a pressure tube design.