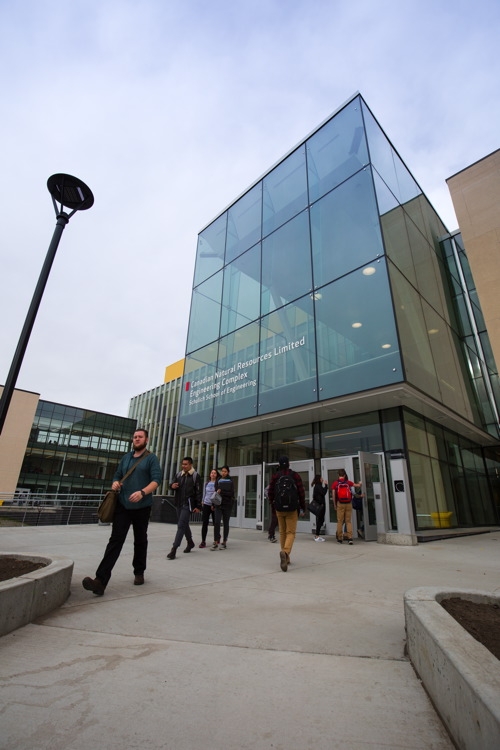 March 14, 2017 – The labs at the University of Calgary’s Canadian Natural Resources Ltd. (CNRL) Engineering Complex are not just any labs: they are brand-new, high-intensity research labs, designed to bolster a “collaborative learning space”, says Bill Rosehart, dean of engineering.

“It was critical in this new space to have the infrastructure to support research activities that tend to require more services from the building, like fume hoods, electrical demand, air circulation,” he continues.

That also meant a lot of cable, as you’ll soon find out.

The $174-million complex, part of the Schulich School of Engineering, opened its doors this past fall, adding 18,300 m2 to the engineering complex and renovating an additional 11,000 m2 of existing space within the Schulich facility.

A combination of renovated and new spaces, “the project is truly transformational to the entire school,” Rosehart adds, as it “holds onto tradition but, at the same time, walking through the new parts, there is an energy toward the future.”

Interconnection intricacy
Calgary-based Trotter & Morton, the electrical construction manager on the project, was involved right from the beginning, collaborating on the designs for cost savings and constructability issues, because “it was such a complex project,” says Russ Webb, Trotter & Morton’s project manager for the endeavour.

Trotter & Morton have worked on a number of other U of C buildings, like the 2012 EEEL (Energy, Environment, Experiential Learning) facility, which uses the sun for heating and less than 78% of energy as compared to other conventional laboratory buildings, the company claims. Even so, nothing has been as intricate as the CNRL complex, according to Webb.

Prior to construction, the complex was made up of a number of blocks (labelled A through F) in a shape loosely resembling a horseshoe. The addition—G Block—was erected in the hollowed out space in the centre of this horseshoe, then connected to the remaining blocks.

“There was difficulty in doing this because we were dealing with an operating post-secondary facility as we were building the new block; plus the fact we had to interconnect all the electrical systems from G Block to the existing ones and make it one big operating facility,” Webb says.

The team put in 600V switchgear as well as a new high-voltage switchgear to provide redundancy to the existing systems in the other blocks.

“So, at any given time, if the power is out or there is a maintenance situation, they can feed the old, existing building from this new G Block service,” Webb notes, adding no other building on campus features something like this setup. “And, so far, it’s been working flawlessly.”

Which came as a pleasant surprise to Trotter & Morton, as some of the engineering blocks are the oldest on campus, and the team was handling electrical gear from 60 years ago.

“To tie into something like that and make sure it’s up to code, up to standard and can stand up to new technology… we thought there would be more difficulties,” Webb says. “But there was very little downtime, which made the owner happy.”

Fluorescents welcome… with controls
The complex features a combination of LED (around 3000) and fluorescent fixtures, and a scalable Encelium lighting control system by Osram, which works in both hard-wired and wireless environments, can integrate into other BMSs (building management systems) via a BACnet interface, and boasts 3-D graphical control and reporting.

“In some areas you can control individual lights,” Webb notes, adding that each space—whether it was a lab, classroom or washroom—was modelled with lighting calculation software to determine appropriate lighting levels, fixture positions, etc.
Encelium relies on occupancy sensors, relaying information from 8-10 sensors in various areas of the complex back to the BMS. While Trotter & Morton didn’t work with the HVAC system, Webb mentions Encelium’s sensors could integrate with that, too, to control how heat/air-conditioning is pumped into certain rooms.

“When it came to the procurement of lighting products, we put it out to many different suppliers, and did an engineering and cost-savings process to see if we could match fixtures that were spec’d to an equivalent fixture for perhaps a lower dollar value,” Webb explains.

Regarding the decision to incorporate fluorescent fixtures, Steven Holland, electrical engineer and associate at SMP (which was also a part of the project), says a lot of people don’t realize fluorescents are more-than-capable of achieving decent energy savings.

“We’re able to achieve energy efficiency in fluorescents, not by necessarily lowering the wattage, but by using the control system we installed,” Holland explains.

LEDs were No. 1, he adds, but when it came to certain fixture demands, fluorescents were selected due to a cost-savings factor and to appease the architect’s vision.

“For example, corridors where we have hundreds of metres of continuous-run fixtures, we went [with] fluorescent,” Holland says.

Tons of wireless points & data cabling
Holland says one of the first things SMP did was lay out the design of the cable tray system—the routing and the pathways—because there is usually a lot of data cable at any university building. They had to ensure the tray layout allowed access to any part of the building without exceeding the maximum run length of the data cable.

This was then incorporated into the building design and co-ordinated with mechanical, architectural and structural expertise.
“So the cable tray system was built into the building as the core infrastructure for communication,” Holland says.
“I didn’t count how much cable, but there was a lot,” says Craig MacLellan, another project manager form Trotter & Morton involved with the build.

“It was a staggering amount,” Webb agrees.

“While there’s a lot of data cable, there’s a ton of wireless access points in the building, too,” Holland notes, which reduced the drops needed, cutting costs.

Glass with a “View”
Walking up to the CNRL complex from the south, you’re faced with a 6-storey, boxy tower of glinting glass: View Dynamic Glass, that is.

The façade on the west side of the building is also made up of this product, which automatically dims based on the external lighting levels thanks to nano-layers of electrochromic coating.

Each individual pane is, basically, a pixel, capable of being controlled independently and, according to Webb, the CNRL building is the first in Canada to boast this particular brand.

Giving them the power to learn
Medium-voltage rings circulate the entire campus, Holland notes and, like the other facilities, the CNRL complex has a redundant MV system, but it also taps into the high-voltage ring with two 2500kVA transformers, “which are sized individually to be able to handle the entire load of the complex. In normal conditions, each transformer is essentially half-loaded”.

Energy-efficient lighting, reliable electricity and View Glass aside, the enhanced engineering facility benefits the entire school, according to Rosehart.

“It’s all part of a culture of stronger, collaborative learning spaces,” he says. “One of the important tenets of the design of the building is to support student success, and one way to do that is to give students space, and as you approach the building and see it all lit, students moving throughout, you see that physical space has done so much for enriching our community.”

* This article also appears in the March 2017 edition of Electrical Business Magazine. Check out our ARCHIVE page for back issues.