“The electrician must take what is available, or risk getting nothing at all.” 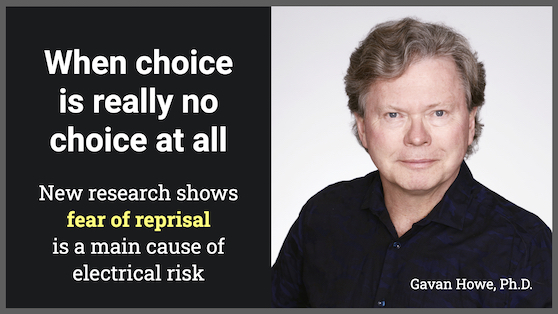 February 24, 2022 – I first met Gavan Howe over a decade ago when he was involved in the launch of Electrical Safety Foundation, Canada, along with a group of industry stakeholders, including Electrical Safety Authority’s then-chief public safety officer, Peter Marcucci.

For some two decades, this independent health and safety researcher has been studying the psychological, sociological, and organizational forces at play with regard to risk and safety in electrical work.

“It started actually quite a long time ago,” Gavan recounts, when he was involved in a focus group on electrical safety. In looking at the research involving live work—specifically, the leading questions being asked—he could see the results were a foregone conclusion.

“And that inspired me to pursue a Master’s so I could research and understand live electrical work,” Gavan says. In fact, his Master’s thesis in 2008 examined occupational risk-taking and risk communications in electrical work.

But Gavan faced a new problem… that of communicating the risks in the electrical trades.

“The data shows that severe death or injury to electricians or apprentices is based upon dynamic complexity, not simple or linear complexity,” says Gavan or, to put it simply, “There’s no root cause for electrocution in the electrical trades.”

Underlying the problem, as Gavan sees it, is an outdated, 90-year-old safety model called “Heinrich’s domino model of accident causation”. Picture five dominoes, all lined up, left to right: the 4th domino is an “Accident” while the 5th domino is an “Injury”. Remove one of the preceding dominoes, and you’ve avoided accidents and injury.

“I argue this is a flawed model, because underpinning Heinrich’s model and research is the notion of human error; stop the error and there is no injury, or ‘blame the victim syndrome’,” says Gavan. “My early research—and the research of others—shows that while some electrical workers willingly take the risks of live work, not all electrical worker death and injury is based on risk-taking, per se.”

Gavan recognized a gap in the research. “If these highly trained and highly skilled experts were still getting killed and injured by live work, I had to set out and examine the other half of electrical risk—something I later called occupational risk-bearing.”

Last year, Gavan completed and defended his doctoral dissertation “Energized work: when choice is really no choice at all”, which explores this new concept of risk-bearing by electrical workers. While nuanced, the concept does, in fact, differ from his earlier work on risk-taking… but how?

In research involving hundreds of electricians and apprentices in 2008, 2015, 2016 and, again, in 2020/2021, Gavan’s findings showed many factors that make electricians concerned about their safety at work; among them, pressure to speed up/work faster, unlicensed workers, injury under-reporting, the lack of risk communications, relaxed apprentice ratios, reduced certification inspections, and fear of reprisal for refusing live electrical work.

Gavan says the number one risk as identified by electricians in 2008 was the work environment and pressure to speed up. In 2016, it was the “trunk slammers”—workers who are neither certified nor licensed—and the fear of working on a system a trunk slammer may have touched. In 2020, the number one risk to electricians and apprentices was the pressure to speed up, followed closely by fear of reprisal.

“This situation of trunk slammers causes great anxiety and great risk,” Gavan notes. “A recent CBC exposé found that Ontario College of Trades inspectors documented over 4200 people working without proper certification in licensed trades in 2015 and in 2016. But since 2018, zero tickets have been issued. Why is that?”

According to Gavan’s rough calculations, at least 15 construction deaths took place in Ontario from November 2020 to February 2021.

“Did zero inspections play a role?” Gavan asks. “This lack of certification inspection, subsequent fines and penalties is just the tip of the iceberg of that dynamic complexity I mentioned earlier, and which contributes to occupational risk-bearing.”

Gavan concludes that highly skilled electrical trade workers are bearing the risk from this combination of pressure to speed up, under-reporting of injuries, trunk slammers, unsupervised apprentices, competition from companies employing unlicensed trade workers—not to mention the pressure to work live or possibly face reprisal.

“It’s a Hobson’s choice,” says Gavan, meaning no real choice at all. “The electrician must take what is available, or risk getting nothing at all. And that’s why I call this situation occupational risk-bearing.”

He likens it to frontline hospital workers who, in many situations today, are working with fewer resources, limited ICU capacity, massive overtime hours, burnout, anti-vax pushback, truck blockades, along with large numbers of their colleagues away sick with Covid. These professionals are bearing the risks of Covid and its systemic impact on our lives.

Is any vocation truly risk-free?

As Gavan and I chatted, I decided play devil’s advocate. I pointed out that, to greater or lesser degrees, every job—every activity—will have some element of risk, some associated hazard. That’s why we perform hazard/risk assessments. Is he advocating for a life completely free from risk? Is that even possible?

“There will always be risk in the electrical trades,” Gavan agrees. “With electricity, there are many situations where live work is the only solution; powerlines for example, troubleshooting and service work are other examples.”

Ontario’s Minister of Labour, Training and Skills Development Monte McNaughton likened an apprentice’s journey map to the “Tokyo subway map”, Gavan says, “And he’s right. The construction trades are an extremely complex system of systems with many moving parts. I am advocating for changes in the system.”

One of those changes could include tackling the issue of under-reporting of construction and electrical injury which, Gavan believes—along with scholars such as Kreshpaj et al (2021)—is still a massive problem.

Most ICI electricians work on a project-to-project basis and are not prepared to rock the boat and risk future shifts. A key indicator of precarious employment is income insecurity.

“Scholars such as Fagan, Probst, Azaroff, Tucker and others state the percentage of injury under-reporting at work may be much higher than 50%,” Gavan warns. “After conducting electrical safety research over two decades with hundreds of electricians and apprentices, I can say unequivocally that fear of reprisal is a main cause of electrical risk, and a powerful motivation for electrical workers to under-report injury.”

Root cause analysis plays a tremendous role in injury analysis, Gavan admits, “but it doesn’t factor in a lot of those human elements”.

“So I believe fundamental change is important. We have to carefully analyze this tight interplay between organizational risk factors, and human risk factors to look at the below-the-line risk factors in electrical work,” Gavan says. “We need a fresh approach to under-reporting of electrical injuries.”

Where does this research lead?

With his dissertation completed, Gavan hopes his research will lead to several changes in both policy and industry, starting with lawmakers, regulators, and inspectors.

Gavan wants to be clear: this is not a blame game. Our occupational health & safety system inherited dated models that continue to blame the worker instead of digging deeper into those “hidden or below-the-line risk factors that continue to cause death and injury of electricians”.

“We must examine closely the dynamic complexity of all those human, environmental, legislative, economic, and organizational systems at play that continue to make construction and maintenance work dangerous for electricians,” Gavan says.

To that end, he has put forward five calls to action to start improving electrical safety.

1. Today’s OHS laws and regulations are based on flawed accident data, says Gavan. “This has to change. Though difficult, we must find a way to reward everyone who reports all serious and non-serious injuries to better understand the actual scope of construction injury.”

2. Recognize that, in many risky situations, construction workers feel they have no choice but to comply. Over 15 years of research has shown a prime cause of occupational electrical risk is fear of reprisal, and recent data shows this factor to have increased significantly during the past decade.

3. Respect the power worker: Electrical work is precise and logical. “Electricians tell me that when they’re thrown off their normal pace, safety is compromised,” Gavan notes. When electricians rush a project, mistakes happen, and accidents take place. “Give these subject matter experts the respect they deserve and let them do the job properly.”

5. “Lastly, I call upon Minister McNaughton to create a task force of industry actors and experts to develop new rules and regulations for reporting and recording all construction injuries that encourage and reward trade workers and their employers.

“Some may argue that it’s the electrician’s choice to risk live work or not but, as with any Hobson’s choice, this choice is often no choice at all,” Gavan says.

You can download Gavan’s dissertation “Energized work: when choice is really no choice at all” below. And while the paper is done, Gavan’s research is ongoing. If you’re interested in having a deeper conversation with him or have stories of your own to share—you can connect with him at gavan@ebranders.com.