News
95 years ago, Tykociner showed us how movies could talk 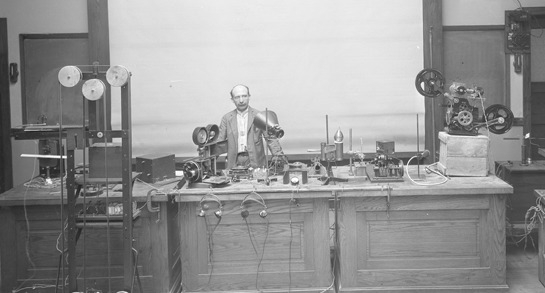 June 21, 2017* – 95 years ago this month, University of Illinois professor Joseph Tykociner showed us how movies could talk. On June 9, 1922, he gave his first public lecture and demonstration of his sound-on-film apparatus. A film of his demonstration was one of the first to successfully incorporate sound.

Tykociner devised one of the first optical sound tracks—in which sound is converted to a light pattern on motion picture film—so it can be played back in sync with the movie.

Although the demonstration film attracted a great deal of attention for Tykociner, patent disputes with the university and skeptics ended his plans of patenting and commercializing the invention.

The original sound has been restored thanks to a grant from National Film Preservation Foundation to preserve the motion picture film elements and potentially restore unknown sound elements from Tykociner’s experiments.

— With files from Meaghan Downs.

— Updated July 7, 2017. When initially published, this news item featured restored archival film of Tykociner’s demonstration, courtesy University of Illinois Archives. Unfortunately, the university liaison did not have the necessary permissions to make that video file available to be published to YouTube. The video has since been removed, and we’re hoping to get another link.