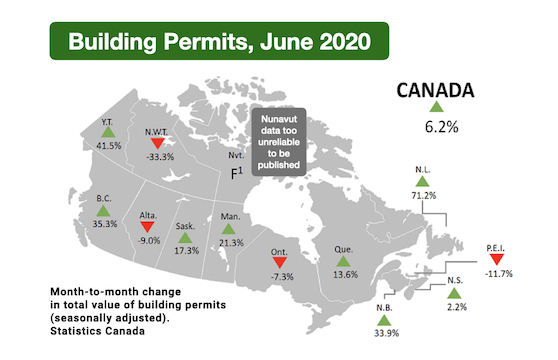 August 18, 2020 – At the end of July, Statistics Canada released its June 2020 building permits report, which confirms much of what we already know…

The second quarter of 2020 started with record declines in April, following the implementation of covid-19-related measures by businesses and governments.

The easing of those measures in May allowed construction intentions to bounce back and continue to advance in June. However, despite the rebound seen in the last two months of the quarter, the value of building permits was down 12.8% compared with Q1—a fourth consecutive quarterly decline.

The second quarter decrease was the largest reported since the fourth quarter of 2008, during the financial crisis.

Compared to the second quarter of 2019, the value of permits declined 17.4% nationally. Losses were reported across all provinces and territories except Newfoundland & Labrador, where quarterly gains in the institutional sector drove the increase in the total value of permits of 25.0%.

Getting into the national numbers

The $687-million dollar Oakridge Centre mixed use redevelopment project in the City of Vancouver helped raise the total national value of building permits 6.2% to $8.1 billion in June, to a level comparable to pre-COVID levels. Overall, seven provinces reported gains for the month.

The value of permits issued for multi-family dwellings rose for the third consecutive month, up 7.3% to $3.2 billion, largely due to major projects in the census metropolitan area of Vancouver (+43.8%).

Meantime, the value of non-residential permits rose 4.6% to $2.7 billion in June.

StatsCan provides even more information, including the value of building permits (seasonally adjusted) by province and territory, and by census metropolitan area.