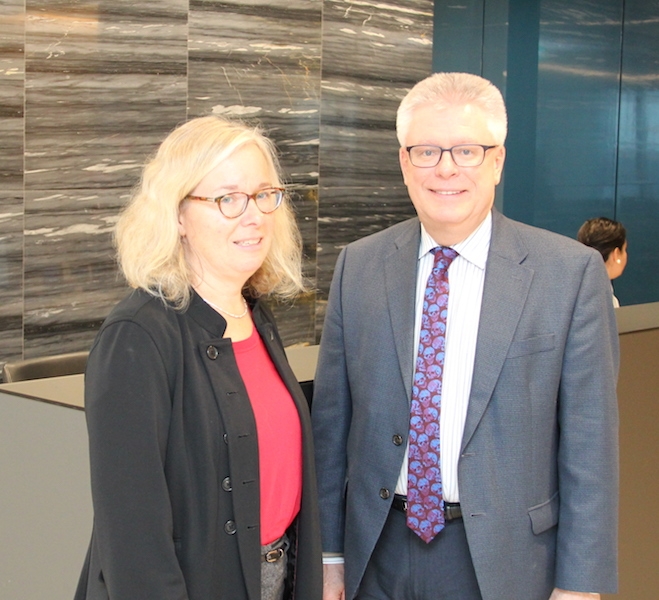 February 4, 2017 – When the Ontario government shelved the concept of Bill 69 (a.k.a. Prompt Payment Act) and, instead, decided to launch a review of the entire Construction Lien Act [CLA], Eryl Roberts—then executive director of ECA of Ontario—argued:

“The Lien Act deals with security of payment, not the speed of payment,” Eryl explained, adding that most contractors don’t have the time or resources to employ the Lien Act, so while a review of the act would be good, shelving Bill 69 is not. (EBMag January 2015, p.3)

For that review, the province retained construction law experts Bruce Reynolds and Sharon Vogel of Borden Ladner Gervais LLP, who conducted numerous meetings to explore the issues with industry stakeholders. The result of all their efforts was a report entitled “Striking the Balance: Expert Review of Ontario’s Construction Lien Act,” released by the Office of the Attorney General in September 2016.

Now, it’s important to keep in mind the resulting report is just that… a report. It is not legislation. It only speaks about things that could be, not necessarily will be. Another thing to note is the report itself is nearly 600 pages-long, so there’s a lot to digest.

As such, when we received an invitation to interview Sharon and Bruce, I and a couple of my colleagues jumped at the opportunity to learn about the review and its key points from those who were in the trenches actually researching and writing the thing.

Finally, I wanted to use that opportunity to ask them whether they think their recommendations address the concerns put forward by both Eryl and the proponents behind Prompt Payment Ontario.

Stakeholder transparency and collaboration
“When the review was announced, the impetus behind [it] was Bill 69. That was how the pressure to have a wholesale review of the [Construction Lien Act] came into being,” Sharon noted. “But Bill 69 only dealt with promptness of payment [which is] the local manifestation of a global movement.”

In fact, there was a need to modernize the CLA altogether, as there were additional issues to address. So when it came time to start identifying and meeting with stakeholders, Bruce said, “We had instructions to be transparent, collaborative, approachable… you know, to take a very open and welcoming approach to the entire process”.

When he and Sharon first sat down to tackle the review, Bruce admitted, “We thought, OK, so how many issues could there be? We thought there might be a couple of dozen,” but as they “moved through the process and arrived at the end of the stakeholder consultation meetings, there were 90 issues which, in the report, generated 100 recommendations.”

“If you look at [construction lien] across the country, you’ll see that there is a need for modernization,” said Sharon, pointing to the fact that all of Canada is pretty much out of date (out of touch, perhaps?) with its construction lien acts. That’s why, Sharon explained, “The rest of the country is watching Ontario; watching and waiting to see what we do”.

Canada-wide lien act modernization is particularly desirable for those stakeholders who work across the country, not just in Ontario.

Eventually, the summaries of all the stakeholder meetings were put up on the CLA Review’s website, but three issues dominated the conversation:

Being construction law specialists, Bruce says he and Sharon knew of these three key issues from the outset, but admits the stakeholder consultation meetings brought the issues home.

“What we learned, in part from the stakeholder consultation process, is that these inadequacies were affecting people in their lives; you know, workers who needed to be able to support their families,” Bruce said.

I got the impression Bruce and Sharon took their mandate very seriously, especially when Bruce said, “The recommendations that we would be making would affect real people, real Ontarians… people working on construction projects who have families, and health plans, and pension plans…”

How did payments/disputes get so screwed up?
So how did things get so screwed up with the CLA—an act that, according to Bruce, “was a revolutionary piece of legislation in 1983, and quite well thought-out for its time”?

He admits the normal payment cycle on a construction project has, without question, become elongated over the last 35 years, citing “the increased complexity of construction contracts [and] projects, and financing, and the introduction of paperless construction projects… which have amplified the number of documents that get generated”.

Plus, sign-offs for payment certification that may have required just one or two signatures  35 years ago now require perhaps four, five or six signatures, “and that has the collateral effect of slowing down payment”.

But there’s another aspect to the problem of getting paid in a timely manner, and that’s when you enter what Bruce calls “the gridlock aspect of promptness of payment”, like when a project enters dispute territory.

“If you find yourself in that country, you’re going to be residing in a country that’s mainly populated by lawyers, claims consultants [and] members of the judiciary who are trying their best to resolve that dispute,” Bruce explained. “The very powerful feedback that we got from stakeholders on that side of things was that it was an enormous frustration with the time it takes to resolve a dispute through the existing construction lien action process, and an enormous frustration with the cost—the legal cost and the consulting cost—that goes with that”.

“There seemed to be a consensus that, when you’re thinking about promptness of payment, you have to take both those things into account, and so we very much tried to do that in our recommendations,” Bruce noted.

“In regard to promptness of payment, we’re recommending that commercial parties remain free to enter into the types of payment arrangements that currently exist,” Bruce said, citing milestone payments, as an example. “One of the concerns around Bill 69 was that it would impose aspects in the nature of regulation of the payment process that would have precluded milestone payment structures.”

In their report, Sharon and Bruce recommend parties remain free to agree to the payment structures of their choosing; however, “Once a proper invoice is issued, then there is a regulated time period within which payment must occur,” Bruce said.

This means current payment processes (e.g. draw requests) will need to be re-engineered, Bruce insisted, because one of the reasons for the elongation of the payment cycle involves checking invoices against site conditions to determine whether the milestone, or percentage of work, has actually been achieved.

“That is the point at which we regulate and say, ‘You have a fixed number of days within which to perform that process i.e. verify the work was done to issue payment’,” said Bruce.

The other area where Sharon and Bruce propose regulation is in the area of dispute resolution.

“Right now, you’ve got dispute resolution provisions within construction contracts which can extend over hundreds of days, and your recourse—if you don’t like the provision in the contract—is to preserve a lien and commence a lien action. There’s huge frustration with the time associated with having to pursue your remedies through the lien court,” Bruce conceded.

This is why they recommend the industry adopt a dispute resolution mechanism called Adjudication, which started in the UK some 20 years ago, Bruce explained, and has since migrated to other common law jurisdictions. Briefly, Adjudication gives you an interim binding determination within 42 days of the issuance of a Notice of Adjudication.

But that does not mean what’s done is done. Bruce explained that, even with Adjudication, parties can circle back after the project to seek stronger remedies; however, experience from other jurisdiction shows they tend not to.

Re-defining “Improvement”
The subject of IT infrastructure came up in the stakeholder meetings, Bruce and Sharon explained, particularly among electrical contractors who perform information technology work. As it turns out, there is a lot of confusion surrounding IT work, and the definition of IT work itself varied from person to person.

“Time and time again we heard [owners] struggled to understand whether that work was lienable or not; whether they should be keeping holdback; whether those installers had a right to lien, what they should do,” Sharon said.

Ultimately, Bruce and Sharon decided not to have a recommendation specific to IT in their report. Instead, they recommend the definition of “Improvement” be amended to distinguish between a Capital Expenditure versus an expenditure for periodic maintenance.

“We think that it should be of assistance to IT providers,” said Bruce, “to either bifurcate their contracts into a capital contract and a periodic maintenance & support contract or, even if you have only one contract, you differentiate your pricing.”

Like the name of the report itself, Sharon said, “We did try to strike a balance within the report to take into account the differing needs of the differing participants in the construction industry, which included generals, owners, subs, suppliers, design consultants”.

And while Bruce and Sharon’s names are on the report, Sharon graciously points out it was a team effort, especially where the stakeholders are concerned. “We’re so grateful to the stakeholders for the time and effort and input they put into the process, because it wouldn’t have worked without stakeholder input,” said Sharon. “Those 70 stakeholder submissions that we got—many of them—were just really so carefully researched and considered, and well thought-out.”

The construction industry is vast and complex, involving a number of trades and professionals: “Which is one of the reasons we suggest a periodic review of the act [as well as] industry education, because people in certain sectors don’t understand the act, and don’t understand how it applies to them now,” Sharon said.

So, again, let’s refer back to Eryl’s comment at the start. I asked Bruce and Sharon whether they feel their review (and subsequent report) addresses his concerns.

While the recommendations in the report relating to promptness of payment differ from the words of Bill 69, Bruce and Sharon feel they’ve made specific recommendations that will help address that concern, such as implementing new provisions in the CLA for payment to be made (within 28 days of receipt of a proper invoice) from owner to general, then general to sub one week thereafter.

“I’m oversimplifying, but that suite of recommendations was designed to address a concern about elongation of payment without the need to resort to registering a construction lien,” Sharon added. “I think we have addressed Eryl’s concerns.”

“I would emphasize that promptness of payment is a real issue,” Bruce conceded. “It’s a national issue, it’s a global issue, and PPO [Prompt Payment Ontario], I hope, is comfortable that we’ve recognized that in our report.”

SEE ALSO What does Ontario’s Construction Lien Act Review mean to you? A recording of the webinar delivered by EBMag’s Legal Desk columnist, Dan Leduc, November 2016.