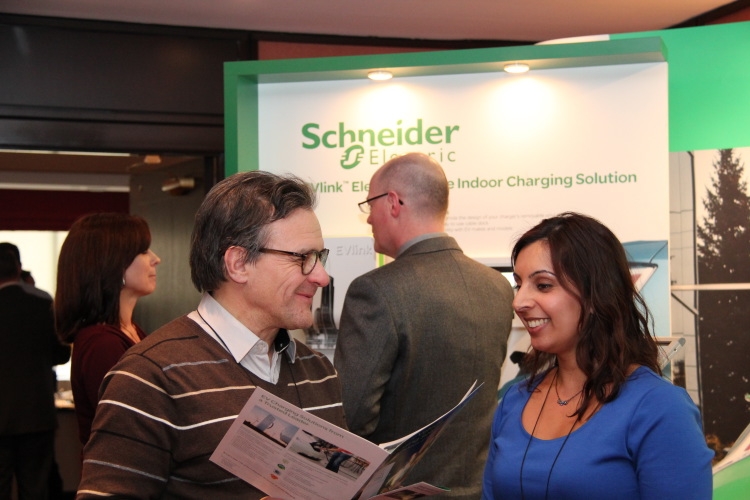 Cara Clairman, president and CEO at Plug’nDrive Ontario, kicked off the conference with an overview of EV infrastructure in Canada. Calling our current EV charging market the “The Wild West”, she noted too many charging station business methods are currently being tested (which include: free, pay as you go, membership, solar, and battery swap), and predicted consolidation. She also noted that as of December 2012, 2350 EVs were sold in Canada—1650 hybrid plug-in and 700 pure electric. While the numbers appear low, Clairman pointed out that the Toyota Prius did not sell well when it was first released.

Martin Rovers, senior advisor, Smart Grid at PowerStream, presented an interesting take on the effects EVs brought to utilities, by highlighting both risks and opportunities. To address two infamous EV utility risks—unplanned asset loading and additional peak demand—Rover proposed time-dependent electricity pricing (peak vs. “super” off peak) and smart charging, where the charging rate would vary to align with spare capacity on the grid. He noted new grid services, potential storage and high asset utilization as a result of night charging as several EV utility opportunities.

A crowd favourite was speaker Ricardo Borba, a software engineer at IBM Canada, who is also the owner of the first Nissan Leaf in Canada and member of the Electric Vehicle Council of Ottawa, Ont. The enthusiastic EV owner proclaimed the Leaf as “extremely fun to drive”, saying it was the “most comfortable car” he has driven in the cold. Borba drives the Leaf for his usual 34km commute and, after 16 months of ownership, said he has noticed $2150 savings in gas, oil changes and car insurance.