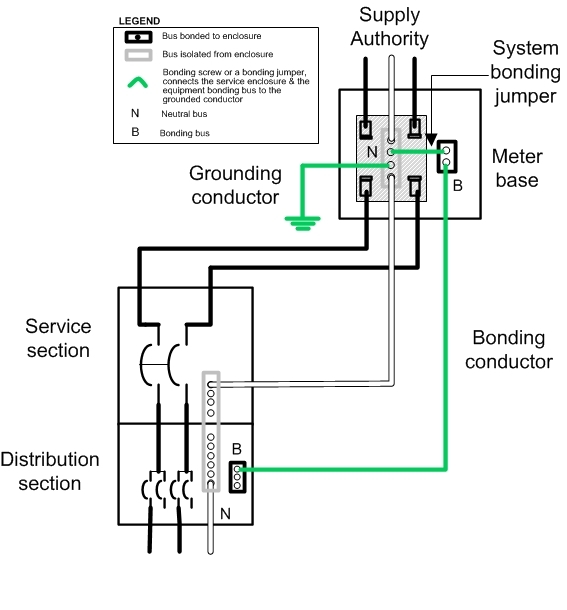 June 20, 2018 — One of the major changes in CE Code 2018 is a revised Section 10 “Grounding and bonding”. This Section has been misunderstood by many in the past, with some of its requirements considered controversial and confusing.

As a member of the Section 10 Subcommittee, I want to acknowledge its members and chair Rene Leduc’s hard work and dedication during its rewrite. The 2018 changes aim to clear up some of this confusion, starting with its reorganization to help you navigate more intuitively:

A new definition is equipotentiality: the state in which conductive parts are at a substantially equal electric potential. This definition clarifies the concept of “bonding” versus “equipotential bonding”.

A good example of equipotential bonding is swimming pool bonding required by Rule 68-058(1). Bonding together metal parts of the pool and non-electrical equipment associated with the pool establishes an equipotential plane.
Solidly grounded system is an electrical system in which a point is connected, without inserting an impedance grounding device: a) to a system bonding jumper, and b) by a grounding conductor to a grounding electrode or to a conductive body that extends the ground connection.

Solidly grounded system is an electrical system in which a point is connected, without inserting an impedance grounding device: a) to a system bonding jumper, and b) by a grounding conductor to a grounding electrode or to a conductive body that extends the ground connection.

System bonding jumper is a connection between the system grounded point and the non-current-carrying conductive parts of an electrical system to establish a solidly grounded system.

For service grounding, as identified in the new Appendix B Diagram, Figure B10-5, the service box is required to be supplied with a bonding screw or bonding strap as a bonding jumper, as per the applicable Canadian product standard requirements. A bonding connection is required between the service box and meter mounting device and this new requirement will be discussed in future articles.

However, when grounding is done at the meter mounting device (as identified in the Appendix B Diagram, Figure B10-4), the system bonding jumper is required to be field-installed and sized in accordance with new Rule 10-614 (if not provided as part of the meter mounting device). As per the new Appendix B Note, it is important to understand that even when the neutral bus in a meter enclosure is connected to the enclosure, the manufacturer’s instructions should be consulted to determine whether the solid connection to the enclosure is suitable as a system bonding jumper.

CSA standard, C22.2 No. 115 “Meter-mounting devices” does not include service entrance requirements, and changes are required in the standard to include design, testing and marking requirements applicable to the service equipment.

In this case, the bonding jumper that is part of the service box would be removed, and a bonding connection between the service box and the meter mounting device is required (Figure 1).

Tatjana Dinic, P.Eng. is a Code Engineer at Electrical Safety Authority (ESA) where, among other things, she is responsible for code development and interpretation, and improving harmonization between codes and standards. She is a Professional Engineer with an M. Eng. from the University of Toronto, and a member of CE Code-Part I, Sections 4, 10 and 30. Tatjana can be reached at tatjana.dinic@electricalsafety.on.ca.

This article originally appeared in the May 2018 issue of Electrical Business Magazine.