Features Articles
Chadwick Electric: a “Mac’s Milk without the milk” 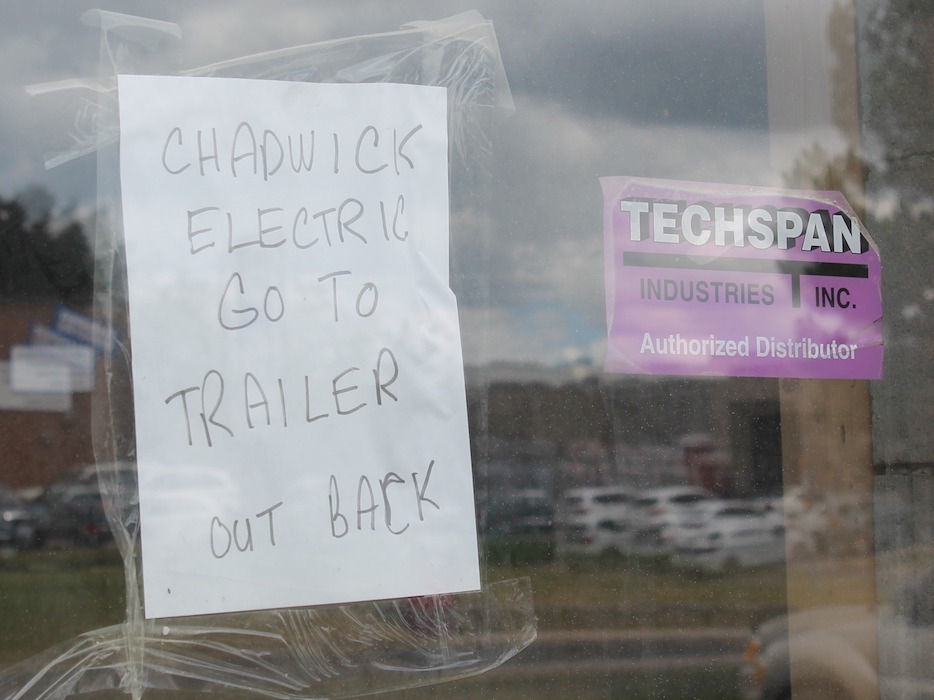 Tyler Chadwick and Craig Chadwick, owner of Chadwick Electric Supply, have called the trailer in the back lot home for the past several months.

July 21, 2016 – “I know more about insurance than I care to,” said Craig Chadwick as we chatted about the total-loss fire of February 12, 2016, that nearly erased 25 year-old Chadwick Electric Supply from the Hamilton, Ont., landscape.

The fire happened in the late afternoon as Craig, the owner of the distributorship, was on his way to the cottage. He got a call from his security company, and figured it was just another annoying false alarm call. He was wrong.

After the firefighters had done their work, Craig’s son Tyler was the first to enter the building at 65 Nebo Road, where he started taking some pictures and assessing the damage. When Craig finally entered, he didn’t initially grasp the severity of the blaze. “I didn’t think it was that bad. But then I noticed the stink, and everything was covered in soot.”

His distributorship was burnt; about 6000 sf to 7000 sf (including the mezzanine) were a mess, and Craig lost about $600,000 in inventory. (Read the Hamilton Spectator story) To this day, the cause of the blaze remains a mystery.

A story of rebuilding
But this isn’t a story about loss and hopelessness. In fact, what got me interested in Chadwick’s story was the following from an email exchange I had with Craig a short while ago:

I write this from a jobsite office trailer after suffering a total-loss fire on February 12th. We anticipate being entirely back up and running in 4-6 months. It is an experience I would not wish upon my worst enemy […] If nothing else, [my story] will show the necessity of good insurance and the fantastic co-operation we have had from some of the biggest manufacturers in the world.

As we chatted, Craig explained the importance of being “right-insured”; after the fire, he discovered Chadwick Electric had, in fact, good insurance.

Tyler Chadwick and Craig Chadwick, owner of Chadwick Electric Supply, have called the trailer in the back lot home for the past several months.

“Insurance is confusing,” Craig admitted, but he “quickly learned how to read the policy”. There was going to be a loss, “but we were going to be OK”.

“The best thing is to have open, honest discussions with your insurance. No fighting. Do what’s fair in the process,” said Craig, acknowledging that, “when they’re cutting cheques, they have to be careful.”

“Make sure you review your policy, especially for business interruption,” Craig advises. “It would be very hard to restart without it. It’s better to have it and not need it, than not have it and need it.”

Getting by with help from your friends
To save costs after the fire, Craig, his son Tyler, and Tyler’s rugby friends helped empty the contents of the fire-damaged building. Even then, the clean-up cost Craig about $5000.

But what about business continuity? “For the first two weeks after the fire, no one was answering the phones,” Craig confessed, so the team kicked into high gear to reach out to all of their accounts. “We’ve maintained 75% of our business,” said Craig, who has two full-time reps on the road.

“The staff here [myself, Tyler, Kim, Joe and Gary] have been fabulous,” said Craig proudly, who wanted to instil and maintain a business-as-usual workplace. Part of that includes ensuring everyone still takes their vacation.

“And our customers have been great,” said Craig, noting they’ve been paying on time rather than taking 60 to 90 days.

But their current location—the jobsite trailer in the back parking lot of 65 Nebo Road—doesn’t offer a lot of room for inventory.

“We’re like a Mac’s Milk [convenience store] without the milk!” noted Craig, which is why manufacturer support has been so helpful and appreciated.

“Our manufacturer partners worked with us on freight charges. It is in everyone’s best interest to give us help to stay in business,” said Craig, adding, “In fact, I can’t think of any manufacturer who didn’t help us out to get back on our feet. Each one chose to do it their own way, but they all stepped up to the plate.”

Looking forward to reopening
Craig is thankful for all the customers, employees, manufacturers—and, yes, even the insurance folks—who have stood by the distributorship during its time of crisis.

“We are fortunate in that we minded our manners in the past,” Craig said.

“I think we’re over the worst of it,” said Craig, hopefully. By the time you read this, they should have settled all their permits and started rebuilding. “The building should be finished by Fall 2016, and we move back in.”

He says they’ve done all the purchasing for things like computers and furniture, only “there’s nowhere to put it yet”.

They aim to “grow” their inventory rather than replace everything all at once, Craig notes, “and our manufacturers are just waiting on word from us to come in with their displays.”

Tyler, meantime, continues to learn the electrical distributor ropes, so to speak, building friendships and learning the products they sell. He cites one specific piece of advice that helps him whenever he feels overwhelmed by the sheer breadth of electrical product:

“Learning a business is like drinking a two-four of beer… you drink ‘em one at a time”.

“There’s still doubt in the industry as to whether we’re going to come back,” Craig admits, so what makes him think an independent like Chadwick Electric Supply can survive? “We can service our accounts! We have to service our accounts—that’s the reason we’re still in business.”

While he admits there have been times—especially at the beginning—when he thought about just throwing in the towel, Craig—along with Tyler and his team—are throwing everything they have into reopening Chadwick Electric Supply.

“The fire is an opportunity to start over… to push the Reset button,” Craig said, with Tyler adding, “I think our customers will also be excited.”