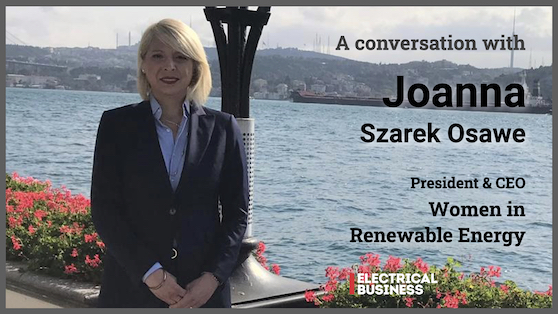 June 22, 2021 – When I first met Joanna Szarek Osawe somewhere around 2014, Women in Renewable Energy (WiRE) was just a budding organization with big plans… and an even bigger heart.

Joanna is WiRE’s president & CEO. Founded in 2013 in her backyard of Toronto, WiRE’s mission “is to advance the role and recognition of women working in the energy sector, inclusive of all renewable energy and clean technologies”.

For the past 15-plus years, she has worked at leading renewable and energy sector companies in Canada and the United States. And recently, Joanna was appointed to the Federal Sustainable Development Advisory Council, which is led by Jonathan Wilkinson, Minister of Environment and Climate Change.

I decided this was the perfect time to catch up with Joanna; to chat a bit more about WiRE and see how far it has come since those early days, and to find out a little more about this advisory council.

During her time in the renewables and energy sector, Joanna noticed “there are not a lot of women, minorities, or LGBTQ in our sector”.

“Whether it’s in the boardroom or on the construction site, I’ve typically been the only female there,” Joanna recalls, “and I really wanted to see that number elevated.”

It was the desire to change these demographics that drove her to Women in Renewable Energy in the first place.

“One of my biggest champions has been my husband, who really pushed me toward WiRE,” Joanna says. “He deserves tremendous applause for his patience and ongoing support.”

Since its launch less than a decade ago, WiRE has grown by leaps and bounds. Its programming includes “capacity-building field trips, networking meet-ups, awards recognition programs, student bursaries, speed mentoring and more”.

“We are now in every single province, as well as the territories,” says Joanna proudly. “We also have chapters in the MENA Region [Middle East and North Africa], and also Turkey, Azerbaijan, UAE, and Georgia. And we’ll soon launch in Italy and Africa.”

“We have a fantastic leadership; a board of directors I’m very happy to lead with Aisha Bukhari and Julia Cushing, plus an excellent advisory committee that assists and provides recommendations.”

And the results of all these inputs are initiatives like WiRE’s distinction awards, in which the group works with companies in the energy industry “who wish to recognize and celebrate people who go above and beyond to help the role and recognition of women in the energy sector”.

“Right now, we are working on launching an Indigenous Community award, so we’re very excited,” she adds.

Besides the field trips to various energy installations, WiRE’s signature initiative (to my mind) is its speed mentoring.

“This is really a fascinating program, similar to speed dating,” Joanna explains. “It’s typically done at conferences where we partner decision-makers with emerging professionals looking to enter the sector.” This gives industry newcomers the opportunity to have informal conversations with veterans and really “get to know” a sector. And, of course, it’s a great way to meet people and expand one’s network.

WiRE also provides speed interviewing, profiles industry champions in its communications and, like others during this pandemic, “We have a ton of webinars”.

“We are a volunteer-based, volunteer-run not-for-profit organization, so I’m overjoyed with the fantastic support we continue to get from our sponsors, which help keep the lights on!” Joanna says enthusiastically.

And that, naturally, leads to the importance of partnerships to both Joanna and WiRE.

“Whether it’s government, industry, etc., I’m extremely proud of our partnerships; they are win-win for both organizations, and we complement each other’s messaging,” notes Joanna, explaining it’s easy when partnerships are aligned with WiRE’s mission and vision.

Just last year, WiRE started launching Student Chapters. “Right now, we are working with Ontario Tech University, as well as University of Windsor. And we will be launching at Western, York and other academias [sic] in Ontario in the coming months.”

And while WiRE is now international, Joanna insists the organization remains glocal: “Be global, but act local”. For example, some programs and initiatives that work in Canada may not apply in other jurisdictions. “So we work with the women in those countries to better understand what their needs are.”

So what is this Federal Sustainable Development Advisory Council to which Joanna has been appointed?

“Led by Jonathan Wilkinson, Minister of Environment and Climate Change, the council is made up of members of the Canadian public so as to represent the views of different provinces and territories, Indigenous peoples, as well as environmental non-governmental organizations, such as WiRE, and business and labour organizations.”

“And, for the next four years, we will provide advice and work to develop policies around climate change,” Joanna continues. “Because of the immense wealth of experience among WiRE participants, I’ll be relying on their participation and advice to ensure our voices are heard as the federal government drafts sustainable development strategies.”

“It’s fantastic to have a seat at the table, but it’s not just my voice… it’s really all of our voices, combined, at that table.”

I asked Joanna to look back over the last eight years since WiRE’s founding and highlight for me any moments that really stand out for her.

“I’ve received a few standard questions or remarks over the years that have definitely not sat well with me,” Joanna admits, reinforcing the notion that something like WiRE was needed in the industry.

“When we started WiRE, we would hear comments like ‘Do I have to put on a wig or skirt to join?’ or ‘Is this an anti-men group?’ or even “Aren’t you just segregating everyone?’,” Joanna remembers. “And my standard response is that WiRE is open to all. We are about bringing everyone together.”

And, to ensure there is no ambiguity, I asked Joanna to confirm what I already knew: that WiRE has always been open to everyone.

“As a matter of fact, our CFO is a gentleman, as are a lot of our volunteers. So, yes, and we continue to make sure we include everyone.”