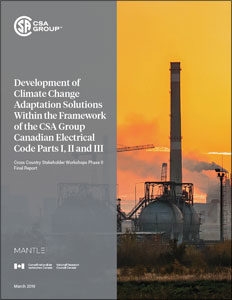 The Conference Board of Canada estimates $347.5 billion will need to be invested in electricity infrastructure to maintain today’s level of system reliability in the face of climate change and its associated impacts, including flooding, wildfires, permafrost movement and heavier ice, wind and snow loads.

“The infrastructure we rely on daily must remain resilient to more damaging and frequent extreme weather events,” says Mary Cianchetti, president of standards at CSA Group. “Standards play a critical role in making that happen.”

The report, Development of Climate Change Adaptation Solutions within the Framework of the Canadian Electrical Code Parts I, II and III, is one of seven projects launched by CSA Group as part of the National Research Council’s (NRC’s) Climate-Resilient Core Public Infrastructure program. (To download the report, click here.)

With support from NRC and funding from Infrastructure Canada, CSA Group held workshops across the country to identify any gaps in current electrical standards, best practices for climate adaptation and recommendations for future updates to the CE Code.

Some of these recommendations include:
– Emergency response guidance.
– Improved weather and loading maps to help inform updates to equipment requirements.
– Guidelines for exposed installations.
– Region-specific compliance paths to address extreme weather.
– Co-ordination with other codes to help ensure all infrastructure, not just electrical, is resilient against a changing climate.

The recommendations have been analyzed and another report—expected to be released this spring—will put forward 50 standards project proposals. These two studies will inform technical working group discussions in the next cycle of revisions to the CE Code, Parts I, II and III.