Cleantech Features Articles Blog Cleantech In-Depth
Digitalization and sustainability – not so nebulous, after all

Compared to days gone by, “We’re working in a much more collaborative environment”. 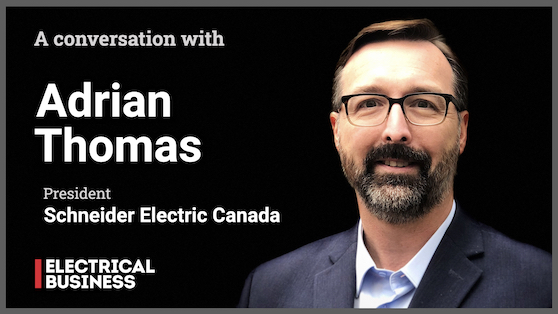 November 28, 2021 – Over the years, I have found concepts like “sustainability” to be ill-defined, if defined at all. Instead, they seem to be invoked with the purpose of conjuring an interpretation—a vision—in the mind of the reader or viewer, which may not remotely align with someone else’s vision.

One of the terms that’s been rising in popularity is “digitalization” and, much like “sustainability”, I wondered: is this another possibly nebulous catch-all that defies definition, or does it mean something concrete?

Enter Adrian Thomas who, besides being president of Schneider Electric Canada, also possesses over 20 years of experience in the electrical and automation industry; meaning, how should know a thing or two about these subjects.

During our conversation at EBPowerCon 2021, “Sustainability, Digitalization & Diversity for 21st Century Success”, I asked him to expound these two concepts—Sustainability and Digitalization—with the aim of making them understandable and actionable.

When we hear “sustainability”, Thomas said we all probably conjure the same image in our minds: “You know, trees with with green leaves.”

“But, when you step back, [Schneider Electric] takes a more broad view of sustainability, and it’s built upon the UN’s 17 sustainable development goals.”

Those 17 Goals do, in fact, include trees with green leaves, but also things like Decent Work and Economic Growth, Affordable and Clean Energy, Good Health and Well-Being, Gender Equality… and 13 others.

A key facet of workforce sustainability is diversity, equity and inclusion, Thomas continued, and how you partner with other people, other stakeholders.

In short, it is more than just our common vision of trees with green leaves, and there are both local and global imperatives for jumping on the sustainability train.

“This is been in discussion for many years, from the Kyoto Protocol to the Paris Climate Accord in 2015,” Thomas reminded me. “As society, there is the belief that we need to do something about climate, and we’re seeing that reflected in public policy. Just in December [2020], the government increased the cost of carbon. And that’s going to lead into the second force, which is financials. There is now a cost to emitting carbon.”

That said, Thomas is quick to point out there are also numerous opportunities for making one’s operations more energy-efficient and for reducing waste.

Diving into the the subject of digitalization… are we just looking at being able to monitor and track the performance of, say, a motor? Are we talking about the cloud, and whatever lies therein?

“I would sort it into two basic groups. The first is digitizing the information that’s available from the equipment in the buildings we are already using,” Thomas explained. “So your concept on motors… are we able to bring back energy data into a system—into a place—where we can use that information to give us some insights?”

This brings us into the realm of IoT and sending data to the cloud where it can crunched into something useful.

“The other piece to digitalization is virtualizing,” Thomas continued.

Schneider Electric, he explained, invested in a software company that helps stakeholders virtualize an entire building project, from construction to operations and maintenance.

“When you can virtualize that [building], you have the opportunity to optimize it [and so] reduce costs, manage the timing better…” All things you can do in a virtual world without impact in the physical world.

To flesh out digitalization even further, I asked whether all this information extends—or should extend—to general contractors or the trades involved in constructing or maintaining that building? Do you see this data, these insights, extending across the whole construction team, I asked.

“Absolutely,” Thomas said without hesitation, noting that some trades have already begun adapting resources inside their organizations to become more familiar with the modelling. “And those trades will be more effective and more successful in terms of being able to quote projects accurately, understand their costs, be profitable, and do things in shorter time.”

Once the digital infrastructure is in place, there are additional service contract opportunities for the trades.

“So the moment that, say, a breaker trips or there’s a situation, you’re alerted at the same time as the user, and you can dispatch and provide better service. So I think there are a lot of ways the contracting industry can really leverage this new technology to differentiate [themselves].”

The tricky part (okay, there are many) is figuring out who ensures that digital infrastructure is not only in place, but works as intended.

“Everyone has developed some digitization within their domain. So we have these silos of digitization—we have these systems—which are giving us great value. But sometimes, during the implementation, there’s no one there to plug it all together.”

So there’s still a gap, said Thomas, in terms of who owns the system of systems.

“It’s something that, if you’re doing a project, you have to pay attention to… these systems don’t magically self-connect.”

That said, Thomas is by no means pessimistic about the situation. Compared to days gone by, “We’re working in a much more collaborative environment”, he said.

“So, really, we have to bring together the user of the building, the contracting firm, and some of the solutions and technology providers to solve a problem effectively.

This article presents highlights and takeaways from my discussion with Adrian Thomas during the session “Sustainability, Digitalization & Diversity for 21st Century Success” at EBPowerCon 2021. You can watch the entire conversation below. Remember, EBPowerCon launches January 17. Visit EBPowerCon.ca to Register (free).

This feature—plus more great content—appears in the December 2021 edition of Electrical Business Magazine. Even more back issues are located in our Digital Archive.