A case study in collaboration and smart construction 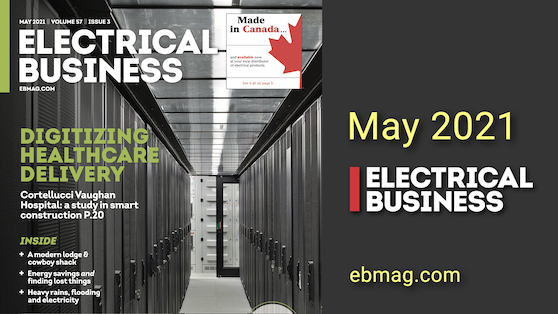 June 9, 2021 – Nowhere has the trend toward optimizing digital integration within a building been more realized than in the healthcare sector, where large public-private-partnerships provide the scope and resources to combine leading-edge clinical technology with intelligent mechanical and electrical services to provide the ultimate in patient-centred care. At the same time, these billion-dollar projects enable general contractors and their trade partners to flex new muscles and incorporate the best of new building techniques to provide workflow and scheduling efficiencies.

The new Cortellucci Vaughan Hospital is the first hospital built in the City of Vaughan—located just north of Toronto—and is the first all-new hospital constructed in Ontario in more than 30 years.

In late October, 2016, Infrastructure Ontario and Mackenzie Health awarded the Plenary Health team a contract valued at approximately $1.3 billion to design, build, finance and maintain the 1.2 million-sf hospital on a 40-acre greenfield site, with a completion target of 2020. The construction team for the project was led by PCL Construction, a group very familiar with P3 healthcare projects in the province. Their primary construction partners included Modern Niagara on the mechanical side and Plan Group on the electrical.

The client, Mackenzie Health, identified their Smart Vision for the hospital early on. “Smart devices, or smart technology and applications, are integrated into our everyday lives with smart phones for example, so we asked “How can we bring this technology into the hospital environment and give that kind of experience to our patients and also to our physicians and clinicians,” says Felix Zhang, chief technology officer with Mackenzie Health.

To achieve that smart hospital vision required a high level of integration, converging the hospital IT network with the building systems. Together with PCL—and teams with expertise in information, communication & automation technology (ICAT)—the client was able to design and develop the necessary converged network backbone that props up the completed smart hospital.

“The P3 model requires a lot of collaboration on the front end,” says Andre Bohren, the construction manager with PCL who oversaw the Cortellucci Vaughan Hospital (CVH) project. “We really do have to build our partnership with our mechanical and electrical contractors, and in this case an additional third-party [Compugen] on the IT side.”

Because connectivity and intelligence are integrated with so many of the different devices and systems in a hospital setting, a high level of teamwork early on in the design was required to ensure the physical infrastructure would be in place to connect all the pieces together.

“The level of collaboration was very high on this project due to the fact that the smart hospital vision touched all of the major systems,” says Steve George, construction director (ICAT) with Plan Group.

Focus group meetings with were held weekly during the design phase and all stakeholders including the hospital, PCL and the trades were included to understand all the inputs and outputs involved in the converged network.

“In terms of the base infrastructure of this building, it’s not that different from other P3s in concept, but then we do have all this integrated mechanical that’s also speaking more to the client’s front-end system, which make this a bit smarter than other builds,” Bohren notes. “There’s more user interfaces, like through patient iPads that can control lighting, the blinds, room temperature and more, and that’s more ‘smart’ than I’ve seen on past projects.”

Peter Cole, district building systems manager with PCL, has been working on hospital P3 projects for over 10 years, and he’s witnessed the evolution of digital integration leading to today’s ICAT sophistication. “Ten years ago we were just touching a little bit on network design. We put a network in a hospital and we called it IT, and then it grew into ICT [information & communication technology], and then all of the sudden they added the automation.”

Bohren recalls the first major hospital project he worked on and installing copper lines for fax machines. “And that was supposed to be one of the more advanced hospitals trending toward paperless. Fast forward three or four hospitals later, and this is the most I’ve ever seen in terms of a hospital venturing into paperless and a user-facing system to this degree. That’s what’s unique at CVH compared to other hospital projects I’ve been involved with in Ontario.”

Today a smart build requires digital technology at all stages, and PCL has built a lot of capability around Autodesk’s building information modeling (BIM) technology for collaboration on design documentation. The trade partners can access the 3D BIM model, and then they can pull out and add pieces where required.

According to Mark Sayers, construction manager for Modern Niagara (and another industry veteran who has worked on P3 hospitals with these partners in the past), this was the first major project incorporating 3D modeling early on. The construction team took the design-level 3D drawings from the architect and consulting engineers and added the construction level of detail.

“That whole process, especially with it being done using the same software model, was unique. It’s now becoming more standard in the industry, but definitely at the start of 2017, it was the first job I was involved with that did that,” Sayers says.

PCL also uses the Autodesk BIM 360 field system for communicating progress. “And we’ve layered on PCL’s own services with a [Microsoft] SharePoint backbone and it gives us a seamless window into those things. I’ve got to say, the collaboration piece in these tools, quality checking, progress photographs, is all shared in real time,” Bohren says.

PCL also has an online delivery tool used to communicate with the client in terms of scheduling deliveries onsite to optimize time, and they use a cloud-based PDF system for collaboration on document review so everyone can do their shop drawing reviews in real time together.

Sequentially, one of the first elements completed onsite was the Central Utilities Plant (CUP), a structure that houses the mechanical room along with power distribution and backup generator. Typically, utility plants are positioned in the penthouse or midway up a building; the CUP was constructed on ground level outside of the main building, providing multiple smart benefits.

“We were able to start building the CUP in advance and in parallel, and start adding in critical systems such as generators, boilers and the major electrical distribution, all while we were still putting up the building,” Bohren says. Commissioning on the CUP was also started well ahead of the main building.

“It was a real advantage for us,” Sayers adds. “We usually have to wait for the entire building to be built before we can start working on the plant, and then it becomes a critical path item at the back end of the schedule.

From the client’s perspective, building the CUP outside of the main building saved on valuable real estate inside the hospital allowing more room for patient care, and it also isolated any noise or heat generated at the plant.

Another element placed outside the main building is the hospital’s data centre. The brains of the hospital information systems and an essential piece of the building’s operations, the data centre was positioned close to the CUP, convenient for connecting with power and cooling sources.

Mackenzie Health elected to go with a prefabricated solution that consists of two identical container-like enclosures that were built and completely outfitted inside at a factory in Southwestern Ontario and then transported to the site.

“We were involved in the planning of the data centre with the supplier based on a specific set of specifications from the client, and we did regular inspections in the factory as it was being built,” says Steve George with Plan Group. Once onsite the team performed some finishing work from an electrical and IT standpoint, including connections to all of the main electrical feeders. The enclosures have their own self-contained uninterruptible power supply (UPS) and backup cooling systems. The enclosures are twinned and, for additional redundancy, they are connected by a fiber network to a data centre located within another Mackenzie Health hospital in nearby Richmond Hill.

Smart benefits of positioning the modular data centre outside of the building, aside from space savings inside, include flexibility for future expansion or even downsizing. “Right now everyone’s talking about cloud services and, who knows… 10 or 20 years down the road we may leverage more cloud services and may not require a huge outside data centre anymore,” says Zhang. “It’s much more cost-effective to do that if it’s outside of the building.”

For construction efficiencies, contractors like PCL seek opportunities to incorporate modular elements into buildings. This project included some 290 prefab patient washroom pods, each around 100 sf and weighing 5000 lb.

“There was an early collaboration with the design team and our trade partners to figure out how to streamline the washroom designs, reducing the number of variations required,” Bohren says. Once the pods were designed, the trades worked in PCL’s controlled factory environment. There are obvious scheduling benefits, working in parallel to the main build and not having to wait for slabs to be poured and the building enclosed. Once delivered, the trades also performed the final connections onsite.

Another example of an offsite modular project included the pre-assembly of all the large chilled water, heating water and condenser water pipes onto structural steel pipe racks. This was performed in Modern Niagara’s fabrication facility. The pipe racks were then shipped on trucks and lowered into a tunnel connecting services from the CUP to the hospital.

PCL and its partners hit important milestones along the construction path and achieved substantial completion of the project in August 2020, amidst the Covid-19 pandemic.

The high level of collaboration among all partners that began at the onset of the project proved critical when the pandemic was first announced. Safety precautions were implemented onsite, and there were no Covid outbreaks. And, after close to 4 million worker hours completed throughout the project, there was not a single lost-time incident. “That speaks a lot to the professionalism of the skilled people we had working on the project, and the safety culture on the project,” Bohren says.

Officially opened on February 7 of this year, the hospital is currently supporting Ontario’s fight against Covid by providing critical and acute care support. Once the pandemic is over, the hospital will serve as a full-service community hospital with the capacity to operate 350 beds with shell space to add more floors of additional capacity. According to Zhang, the greatest reward so far has been the positive feedback from patients… the ultimate goal of their smart vision.

Doug Picklyk is the editor of HPAC magazine, hpacmag.com.

This article appears in the May 2021 edition of Electrical Business Magazine, in our special section “Smart buildings: connecting components and the trades”. Even more back issues are located in our Digital Archive.