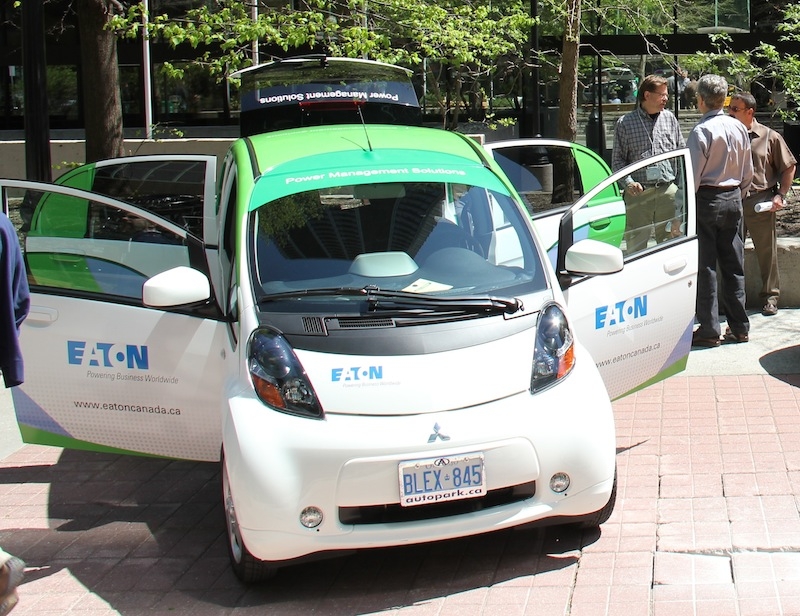 May 14, 2012 – Mitsubishi Motor Sales of Canada today moved a step closer toward faster charging of its electric i-MiEV hatchback with the installation of a DC quick-charge station at its headquarters.

The Eaton-manufactured unit provides i-MiEV an 80% charge in less than 30 minutes. Moreover, Mitsubishi is offering free battery charging from the CHAdeMO-compliant unit to electric vehicle (EV) owners in the Greater Toronto Area (GTA).

(CHAdeMO is a trade name of quick-charging method the CHAdeMO association is proposing as a global standard. ‘CHAdeMO’ is an abbreviation of ‘CHArge de MOve’, equivalent to ‘charge for moving’, and is a pun for ‘O cha demo ikaga desuka’ in Japanese, meaning ‘Let’s have a tea while charging’ in English.)

Eaton says Mitsubishi’s quick-charge station is the first of its kind installed in Canada, and available to the general public at no cost. The DC quick-charger is one of three methods of providing electricity to i-MiEV’s 16-kWh battery pack. Level 2 AC charging—available to home- or business-owners—is a 240V system that offers a full charge from empty in seven hours. To date, over 76 Eaton Level 2 chargers have been installed at Mitsubishi i-MiEV-certified dealers in Canada, and more in the homes of i-MiEV owners. Level 1 charging employs standard 120V receptacles and requires up to 22 hours to charge from empty.

“We are committed to supporting the growth of an electric charging infrastructure, all of which paves the way for greater convenience to our i-MiEV customers,” said Shin Fujioka, president and CEO of Mitsubishi Motor Sales of Canada. Since going on sale last December, Mitsubishi says it has delivered 69 i-MiEVs across Canada.

Among early adopters of i-MiEV are Hydro-Quebec, the Government of Quebec, Transport Canada, the City of Calgary, B.C.’s Saanich Police Department and SaskPower. In addition to fleet deliveries, most i-MiEV sales have been to consumers who have taken delivery throughout the winter.

The Mitsubishi i-MiEV is a five-door, four-passenger, subcompact hatchback with a range of up to 155 km, and offers a DC quick-charge port as standard.