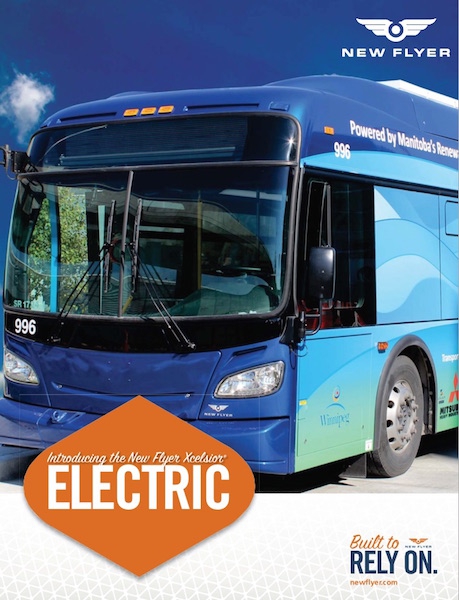 “We didn’t want an easy route,” said Paul Soubry, New Flyer’s president & CEO. “We encouraged Winnipeg Transit to select a route that would showcase the technological capability of our Xcelsior battery-electric bus in a real life in-service situation that will experience a wide range of weather and traffic conditions.”

The buses will be in daily operation on a 40-km, two-hour route starting at Winnipeg Richardson International Airport, making their way through the city centre to East Kildonan and returning to the airport. This route was chosen because its length, speeds and loads are typical of many central business district routes in Canada and States, says New Flyer. (Winnipeg Airports Authority permitted New Flyer to install a high-power charging station at the airport.)

How will the system work?

At the airport, the bus drives up to the charging station and, while passengers are loading or disembarking, a roof-mounted pantograph connects with the overhead charger interface, Soubry explained. “After approximately a 10-minute charge, the bus has fully replenished the energy consumed in the previous two-hour route. For added operational flexibility, the battery capacity allows the bus to operate for five hours without recharge and, by charging en route, the bus can maintain service for more than 20 hours a day, seven days a week.”

CHECK OUT THE VIDEO.

The project is a continuing collaboration between New Flyer, the Province of Manitoba, Manitoba Hydro, Mitsubishi Heavy Industries, Red River College and Winnipeg Transit. The project team (which started the effort in May 2011) received additional assistance in October 2012 when Sustainable Development Technology Canada (SDTC) announced funding on behalf of the Government of Canada of $3.4 million to take the project from prototype to full production and field demonstration. In 2014, Manitoba’s Vehicle Technology Centre provided an additional $94,000 for charging station development.