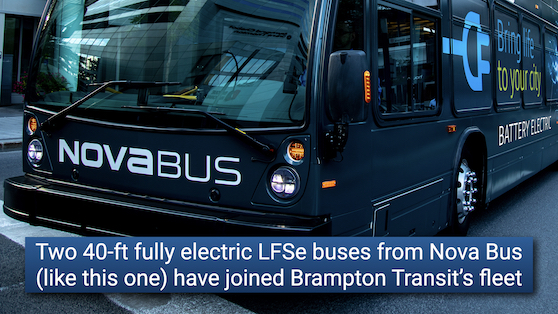 May 4, 2021 – Brampton Transit in Ontario has the distinction of deploying the world’s largest fleet of interoperable and standardized battery electric buses (BEBs). 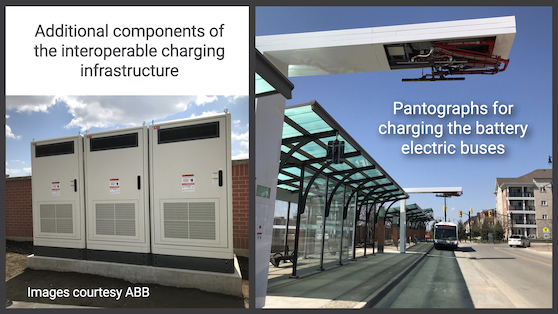 Brampton’s deployment differs from other deployments where buses can only charge at designated charging depots. Brampton’s depot and on-road charging options allow for an increase in daily travel ranges on the electric buses.

The deployment is part of the Pan-Canadian Electric Bus Demonstration and Integration Trial, which was launched in 2017 and is spearheaded by the Canadian Urban Transit Research & Innovation Consortium (CUTRIC).

The initiative is the first in the world where vehicles and chargers from different manufacturers can be used in fully interoperable form, meaning they can plug into one another’s charging infrastructure to gain a charge.

Having achieved its initial goal of deploying 18 BEBs and seven chargers in Vancouver, York Region (Ontario) and Brampton, the trial is expanding to include hundreds of BEBs across seven cities as part of a national joint procurement initiative, says CUTRIC, “using an innovative funding and financing solution from the Infrastructure Bank of Canada”.

According to Catherine McKenna, federal Minister of Infrastructure & Communities, Ottawa is committed to adding 5000 zero-emission buses over five years.

All three transit agencies involved in the trial to-date have agreed to collect real-time BEB and charger data, and share those data sets with each other to support evidence-based electrification procurements in the immediate future.

CUTRIC, meantime, is currently collecting data from all operational vehicles and chargers to support empirical analysis and interoperability testing, and to build a Canadian E-Bus Big Data Trust for municipalities across the country.

“The growth and progress of the Pan-Canadian Electric Bus Demonstration and Integration Trial is shifting the entire zero-emission transit industry toward interoperability and standardization which, in turn, will help ensure that transit agencies and all levels of government benefit from a competitive marketplace,” Petrunić said. “This is good news for taxpayers, and great news for transit riders.”

This article—along with other great content—also appears in the June 2021 edition of Electrical Business Magazine. Even more back issues are located in our Digital Archive.