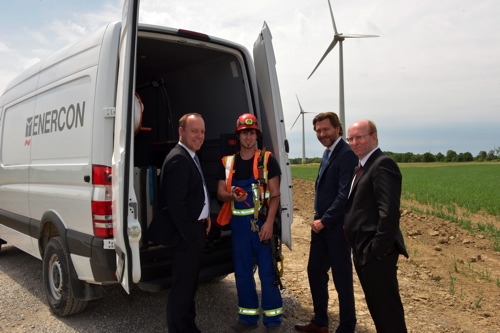 Representatives from Mercedes-Benz Canada and Enercon gathered in Smithville, Ont., to celebrate the beginning of a Canadian partnership that saw 20 Sprinter 4x4s added to the fleet of service vehicles that support Enercon’s wind farms across the country. Photo courtesy Mercedes-Benz Canada.

November 7, 2016 – We continue to bring you the goods from this year’s Work Truck Show in Indianapolis. Check out a few more gold-star finds when it comes to building a “game changing” fleet. We also bring you news of a unique Canadian partnership between Mercedes-Benz and Enercon, who have joined forces to develop a new, specially tested Sprinter 4×4 fleet.

Enercon takes delivery of new Sprinter 4×4 fleet
After two years with a single 4×4 prototype based on a standard RWD Sprinter built in Germany to Canadian specs, Mercedes-Benz Canada (www.mercedes-benz-vans.ca) and Enercon Canada VIPs officially hailed the beginning of a Canadian partnership that will see 20 Sprinter 4x4s added to the fleet of support vehicles serving Enercon’s wind farms across the country.

Enercon tested the prototype at sites across Nova Scotia, Ontario and Quebec over a period of six months, covering a total of 7984 kilometres in the process. To establish the correct technical specs for Canada, the prototype was outfitted with equipment to monitor its engine module. Real-time results were transmitted by GPS back to Mercedes-Benz Global HQ in Stuttgart where they were used to verify and tweak engine programming for the production Sprinters.

“The Canadian climate and turbine locations required some adjustments, which we are proud to share have been successfully addressed by Mercedes-Benz,” said Volker Kendziorra, head of service of Enercon Service Deutschland.

Even with the added weight of the 4WD system, Mercedes-Benz says this Sprinter retains its payload capacity and fuel efficiency. It can also be equipped with an optional low range gear that makes it more sure-footed in difficult terrain. Downhill Speed Regulation can be added optionally to slow the vehicle to a set speed during downhill grades.

The Sprinter 4×4 will open up new markets and opportunities, says the automaker, and provide its customers with an expanded choice of commercial vans.

Enercon Canada Inc. (www.enercon.de) has over 600 employees with offices located in Montreal, Toronto and Dartmouth, service stations coast-to-coast, manufacturing sites in Matane (Que.) and Beamsville (Ont.), and a dedicated training and warehouse facility in Boucherville (Que.). It currently has over 2000MW installed throughout seven Canadian provinces and territories.

You had to look way up when at the XL Hybrids booth at the Work Truck Show. Raised high above your head was an AmeriPride Ford F-59 service truck, upfitted with the XL3 Hybrid electric drive system (www.xlhybrids.com).

Hybrid-electric F-59 trucks are the latest on-road deployment of XL Hybrids technology by AmeriPride, which noted it already operates a fleet of other service vehicles with XL3 systems in Canada.

In a nutshell, the XL3 system transforms an OEM vehicle into a hybrid by adding an electric motor, a lithium-ion battery pack, and control software. It is compatible with Class 2, 3, 4, 5 and 6 vans and passenger wagons, commercial vans and shuttles, box trucks and delivery vans. Installation takes about six to eight hours.

“Our XL3 hybrid system provides up to a 25% increase in MPG with minimal impact to fleet operations, and no driver training or charging infrastructure requirements,” added Clay Siegert, XL Hybrids co-founder.

Isuzu’s 2018 FTR welcomed to Class 6
Isuzu (www.isuzutruck.ca) caught a lot of attention when it dramatically introduced the “game changing” 2018 FTR with a sweep of a silky black sheet off this new entry in the Class 6 medium-duty offering.

Isuzu—which celebrates its centennial this year—noted this vehicle is powered by a 4HK1-TC 5.2L turbocharged four-cylinder diesel engine—a first in the segment.

Although horsepower and torque ratings have not been finalized, the company said the 4HK1 engine is well-known for its high torque output. The powerplant will be mated to an Allison 2000 Series automatic transmission, and the engine carries a B10 durability of about 498,897 km—meaning that 90% of engines should reach that mileage before requiring an overhaul.

There will be eight wheelbase configurations for bodies ranging from 16 to 30 ft, with a 50-gal or 100-gal aluminum fuel tank. “It will be stingy at the pump while still providing the capability you want in a Class 6 truck,” Skinner added.

The dock-high truck with 11R22.5 tires is slated for North American production in mid-2017, the same time more information on pricing, power ratings and configurations will become available.

“The overall concept of the FTR is to bring to our customers the next generation medium-duty low-cab-forward truck—one that features a clean, durable, highly efficient four-cylinder engine and is the best Class 6 choice for pickup and delivery in cities,” Skinner concluded, adding, “The letters ‘FTR’ don’t stand for ‘future’, but this truck represents the future, and it will be here—soon.”

Representatives from Mercedes-Benz Canada and Enercon gathered in Smithville, Ont., to celebrate the beginning of a Canadian partnership that saw 20 Sprinter 4x4s added to the fleet of service vehicles that support Enercon’s wind farms across the country.