Features Articles Test & Measurement
Got ghosts? Troubleshooting the things that make our equipment go bump in the night

Everyone expects the utility to provide clean, reliable power to their homes and businesses, but reality does not match expectation. 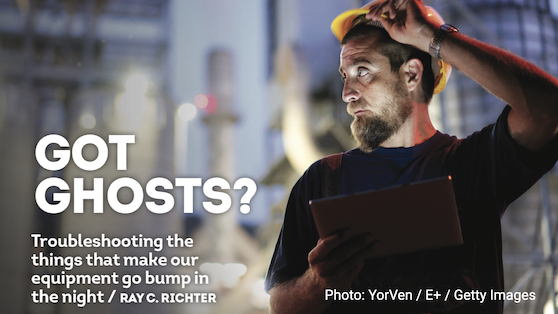 October 22, 2021 – Ghosts in our machines or equipment is probably one of the hardest problems to solve. What do I mean by ghosts? It’s when equipment goes down, behaves strangely, trips breakers, loses its programming, locks up or resets computers… seemingly for no reason and at irregular times.

And I have seen my fair share of men and women—new and experienced technicians alike—lose their cool because of ghosts in the machinery.

But they also fell into the trap of looking for The Big Fix, rather than focusing on the basics.

The basics form the foundation upon which all else is built. They include the helper programs that software needs; the clean power needed by hardware to work properly, and so on. It may take specialized equipment such as oscilloscopes, power monitors, earth-ground resistance testers, or others to identify which of the basics have run amok, but patience and logical thinking will help you achieve troubleshooting success.

Everyone expects the utility to provide clean, reliable power to their homes and businesses, but reality does not match expectation.

Power stations generate 6-phase power, with a neutral and a ground. When you look at high-voltage powerlines, you will see 7 wires on the pole: 6 thick ones and a thin neutral, usually at the top of the pole or tower. Were the load in each phase properly balanced, there would be little to no current flow in the neutral.

The power station’s generators and transformers are earth-grounded to return any stray currents caused by downstream equipment. Technically, the neutral and ground can be—and usually are—connected to the same point when the power is stepped down to 120-240 volts.

As power is delivered, the 6 phases are split into 3 phases (commercial) and 2 phases (homes). To save money, electric utilities will use the grounding system in the home or business as a non-isolated neutral, instead of running a neutral line as it should be done. (This is not a best practice: it creates noise on the incoming powerlines, and becomes a safety issue. All neutral lines should be isolated from the ground line.)

Grounding in a home and, usually, in a business is accomplished via the water pipes coming into the structure. In some cases, however, iron water pipes are being replaced with large plastic lines. (Now the earthing is insufficient, and copper grounding rods must be driven deep into the earth to lower the resistance to ground.)

Another problem I have noticed over the last 35 years is power cheating, likely because demand is outstripping supply. Whenever you put too much load on a generator, the voltage will drop (because you can’t increase the current); the generator is maxed out, and starts to turn slower. If the electric utility cannot produce more power with the assets it has, then something else must be done.

I’m old enough to remember when 110V came out of the wall. Today, we are up to 120V, while 220V has increased to 240V. To do this, the utility changes the taps on their mid-line transformers to raise the voltage. This lowers the current draw, but wattage stays the same.

An older device that was designed for 110V now has to work harder by doing the conversion internally, which creates heat. Also, a lot of equipment is designed to work within a given voltage range, say 110-115V or 220-235V.

With all the new technology now available, the utility can change those power taps on the transformers on the fly through switchgear.

How do I know this? Well, I own very expensive uninterruptible power supplies and, here in Winnipeg—at exactly 7:30 am every weekday—all of my UPSs temporarily disconnect from incoming power. When I checked the logs, I found the incoming power spiked to 128V, then dropped to 126V.

Incoming power should be 120V. You may argue that’s not a big surge, but do it enough times and it may harm your equipment or reduce its designed lifespan.

I experienced a double-whammy while I was stationed at CFB Moose Jaw. We had power problems with our ASR (airport surveillance radar). I spent countless nights and weekends trying to figure out why equipment kept going down, why we kept blowing power supplies, etc.

I discovered we were getting a higher voltage plus high-voltage spikes and, sometimes, varying frequency (below 60 Hz).

SaskPower loaned us a monitor to record the incoming power. About two months later, we identified the cause of the voltage spikes: a buried 12.5-kV line feeding the ASR had a crack in the insulating jacket and, when moisture got into it, we had bad power.

(Wouldn’t you know it but, after a really heavy rainstorm, that 12.5-kV line exploded, creating a 2×2-metre hole in the middle of the airfield that took out both power to the ASR and a major phone line.)

Years later, as a service rep, I returned to the base to investigate a piece of equipment that kept blowing power supplies. I checked the voltage at the equipment, and it sat at 256V instead of 220V. My equipment’s power supply boards, meantime, were rated for between 220-235V.

The base’s power maintenance crew subsequently changed the taps on the base’s transformers to lower the voltage to 220V.

Improper load balancing at the breaker panel can create unintended consequences. I was once called in to troubleshoot a front reception desk that was experiencing regular brownouts that, in turn, would cause the computer and debit machine to reset, sometimes causing data corruption, loss of invoices, and lost payments.

I set up a monitor at the front breaker panel to check the power going to the reception area, and patiently waited for the next brownout. After about 2 hours, it occurred. I quickly started probing circuits, but the load imbalance would be there for only a split second, then disappear.

That got me thinking: someone must be turning a piece of equipment On or Off. I went for a walk to the back work area where I found someone doing some welding. There it was!

I added a disconnect for the welder and balanced the power at the breaker panel.

The loss of earth-ground can present a very serious safety concern. One time, I was called to the refuelling site for heavy-duty diesel construction equipment because there was a spark every time they pulled the nozzle out of the vehicle after refuelling.

That spark informed me the site had either a static-bonding problem or loss of ground—or both. I ran a ground/static-bonding wire from the outside dispenser to the pump and tank inside. This line also continued to the water pipes coming into the building.

I measured the resistance from the fuel nozzle all the way back to the pump, and that’s where I lost the static-bond/ground. I discovered that vibrations from the pump had weakened the 7-strand copper wire to the point where it just broke away from the connector. I reconnected the wire and all was fine afterward.

Another earth-ground case involved a chemical distribution centre (DC) in Winnipeg, and this one proved trickier to solve.

In this situation, the DC was experiencing multiple problems with its equipment—everything from computers and telephones to the self-checking static-bonding equipment.

To narrow things down and, hopefully, find some kind of commonality to these events, I interviewed the staff. I learned the problems would usually start in late summer and get worse during winter months, especially during dry spells.

Summers in Winnipeg have gotten hotter and dryer, causing the ground to be dryer. This company was on the edge of a new development area, so it had some connections to old iron water pipes, but it was also in an area of sandy soil, so the ground tended to dry out in late summer and get even drier over the winter.

I measured the resistance to ground, and found the resistance was, at times, approaching 50 ohm. A really good ground should be at or less than 1 ohm between the ground at the breaker panel to an earth-ground test point about 20 feet from the building. (Anything less than 10 ohm is acceptable.)

In the end, we drove two 10-ft copper rods 30 feet into the ground (water pipes here are generally 15 feet in the ground). Afterward, the ghosts were gone and everything worked properly.

Go back to the basics

Utility power is getting worse. With summers and winters in most of the country getting drier, combined with the use of plastic water mains and utilities trying to save money on wiring, our power problems are also getting worse.

That said, a return to the basics—understanding utility power, load balancing, earth-grounding, and so on—will aid your troubleshooting endeavours as you confront those ghosts in the machinery.

Now semi-retired, Ray C. Richter started working part-time at an automotive repair garage at 16. After high school, he worked on heavy-duty diesel equipment, mostly highway tractors. While in the military, he became a navigational aid tech, working on radar and any ground-based equipment used by pilots or air traffic controllers. Ray then worked as a repair tech for a reprographics equipment vendor before moving to CP Rail, where he got his electrician’s licence. He started his own business in 1998, “working on anything from service entrances to production lines, and everything in between”.

This feature—plus more great content—appears in the October 2021 edition of Electrical Business Magazine. Even more back issues are located in our Digital Archive.