Features Blog
Have you seen the “The Land of Giants” transmission pylons? 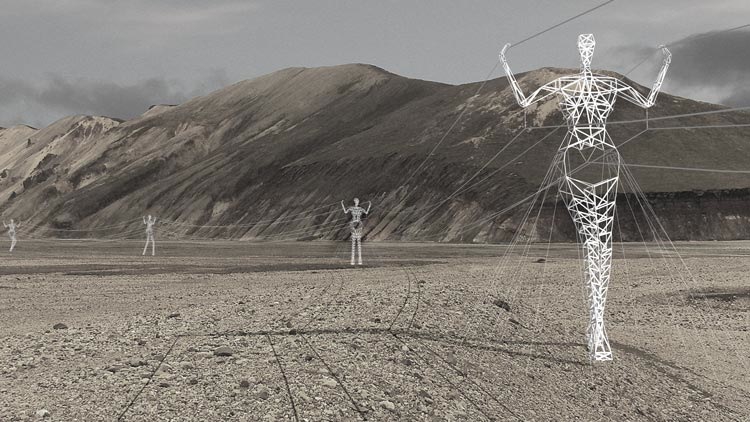 February 27, 2014 – Have you seen the “The Land of Giants” transmission pylons? This was the entry submitted by Choi+Shine Architects LLC in a 2008 Icelandic High-Voltage Electrical Pylon International Design Competition.

The designs were submitted to Landsnet, Iceland national power transmission company, which was working with the Association of Icelandic Architects. The competition’s goal was to obtain new ideas in types and appearances for 220kV towers and lines, and that specific consideration be given to “the visual impact of the towers (or lines) and that careful consideration be given to the appearance of towers near urban areas and unsettled regions”.

“This design transforms mundane electrical pylons into statues on the Icelandic landscape by making only small alterations to existing pylon design,” writes Choi+Shine, adding that despite the large number of possible forms, each pylon figure is made from the same major assembled parts (e.g. torso, forearm, upper leg, hand, etc.) and uses a library of pre-assembled joints between these parts to create the appearance. As such, “This design allows for many variations in form and height while the pylon-figures’ cost is kept low through identical production, simple assembly and construction”.

“Making only minor alterations to well-established steel-framed tower design, we have created a series of towers that are powerful, solemn and variable,” writes Choi+Shine. “Seeing the pylon-figures will become an unforgettable experience, elevating the towers to something more than merely a functional design of necessity.”

Visit the website and have a look at the other photos and animation. It’s always great to wonder what could be with something so ubiquitous and ordinary.